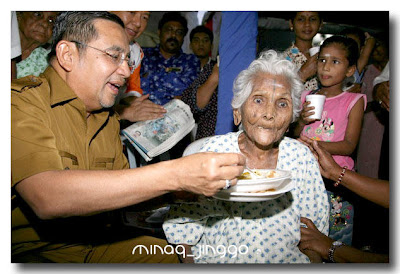 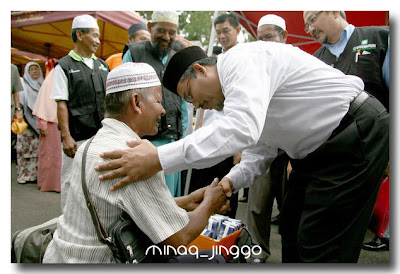 look at that kind young gentleman feeding the old lady. She looks overjoyed! my vote is the guy on the pic above is genuine.

The 2nd pic - hmmm .. i bet you the beggar was still begging after that

one pic shows a phony putting on a show.

the other shows a genuine care for the downtrodden.

He should go to the old folks home and change some diapers to show off. Hahaa....

that top fella is just acting because of the buy election. This movie making has been going on ever since.

how much different is the 2nd fella?
i dont think this is an everyday occurance

ISA, the best hypocrite of the year. Puke!

Zorro, you have got nothing to show what Pakatan had done for the people. That's the bottom line
zilch!

What you're showing were simply small drawbacks compared to the massive goodies and development the government of the day had brought upon the people, including you.

Sadly the opposition had not offered or shown any credibility to bring upon something better. It has been 50 years. All the pakatan leaders are recycled (& rejects).
Is pakatan really a good option?
PAS for Islamic state & hudud.
PKR for Anwar to be PM
DAP for socialist republic.
How's that going to work?

HA HA HA HA
not everyday occurence of course mj........
the key word is who is more SINCERE

Do click my name above for additional story about this ISA...

Anonymous @ 12:51AM said: Zorro, you have got nothing to show what Pakatan had done for the people. That's the bottom line... zilch!

What a brainless statement! Pakatan isn't in charge of the country. Maybe if you give us a chance to govern for at least a couple of terms, we just might have something "to show"... but then good governance is not "for show" (though I don't expect any BN supporter to understand that).

Personally, I can't bring myself to go within 10 feet of any Umno/BN leader. They don't smell good and I trust my nose. The Pakatan leaders I've met closeup have all smelt okay - and I swear it's NOT their after-shave.

Just look & think about our current situation. How are we...??

Only this time it's not the market walkabout and kissing babies pre- election bull stuff.

These politicians will never be seen again till another election, and that has been a fact, like it or not.

what Pakatan had done to the people??? just give pakatan a chance in governing Malaysia....

The poor lady is probably trying to
say "WTF, this bastard is trying to
choke me to death or what?"

zorro; no matter what some of your armchair critics whine about , you are there trying to make a difference & that is commendable , notwithstanding those talking cock do nothing types that deface cyberspace

Don't make me puke lah with that 1st photo. When I play golf at Isa's golf course in Nilai, all flights have to stop for "His Highness" to pass through just because he is co-owner of that golf course. In all other places, only the Sultan and his consort is accorded such honour.

Daer Zorro,
Whom are you trying to CON?
BOTH are Genuine!!!
BOTH are lobbying for Votes!
This happen only during by-elections!
This is POLITICS!!!

It have nothing to do with bn or pr,it is the game of ballot box that is going to enslave the people.
Return to our respective religions and reject politics Totally and like a miracle,peace prevail on the instant.Lord Jesus say KNOW THE TRUTH AND ONLY THE TRUTH CAN SET YOU FREE.Take note of the emphasis on ONLY as all others are pretenders and keep one deeper in bondage.

By looking at the startled woman's reaction, she must have been thinking to herself..'am i dreaming or is this for real' never in their
wildest dream have they felt so VVIP and then she goes , I might as well enjoy this moment while it lasts and it ain't gonna last long!!

Hmm...governing is part of religion too.the best example being your children and spouse, the nucleus of a society.politics is an element in governance and is tainted by the ancient romans and greek.btw define 'truth' minus the perspectives

will dis corruptor feed her again after his victory ?