(thanks Duke & Claire for capturing those Sunday moments.) 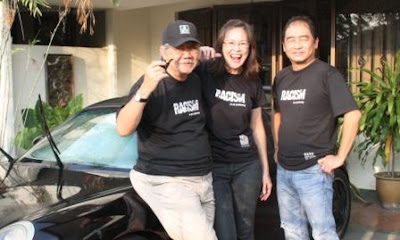 This pic taken by the absent one!

roll call b4 setting out to Kuantan 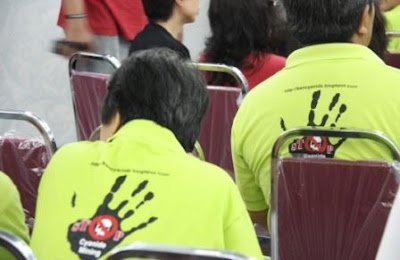 we made it in time to attend the

Bukit Koman activists were well represented. The day before their bus was turned back to Raub. This morning they broke the blockade in a convoy of cars. 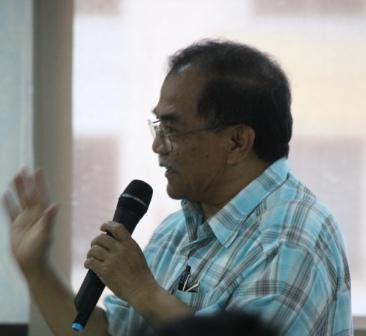 “Investors will only go to clean states like Penang and Selangor. Pahang is not a clean state considering that we welcomed controversial companies to Bukit Koman and Lynas” 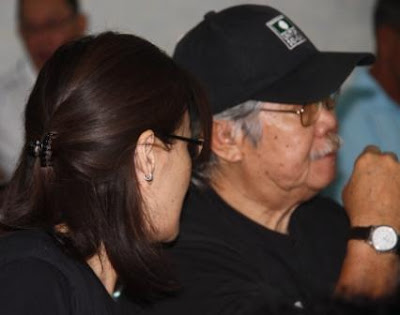 The organizers acknowledged the support of the Barisan Rakyat Bloggers. 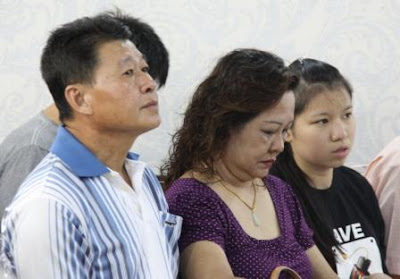 Part of a Sunday crowd of concerned Kuantan folks who listened to firsthand testimonies of birth deformities inflicted on Bukit Merah residents. 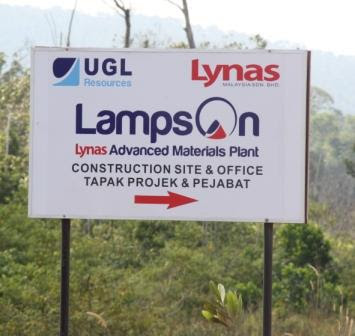 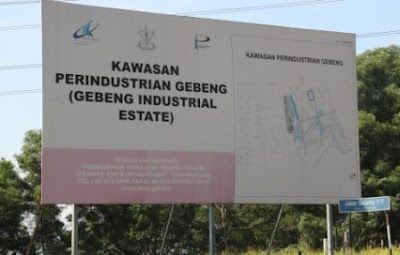 Three of us decided to make an unobtrusive visit to Gebeng and Lynas. Gebeng is the petrochemical hub. Facilities flanked both sides of Jalan Gebeng. Earlier we were informed that directives from the Mentri Besar went out to these companies to discourage their thousands of employees to support the protests. His earlier threat to close down Gebeng is now familiar. The people of Kuantan dared him to do just that. 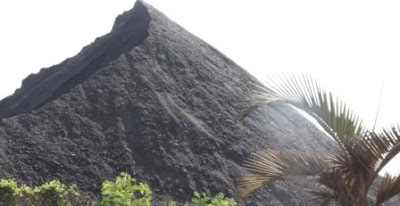 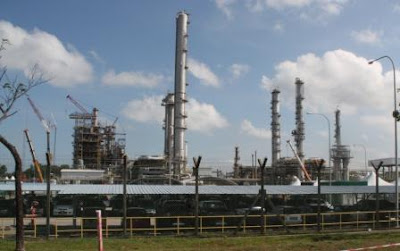 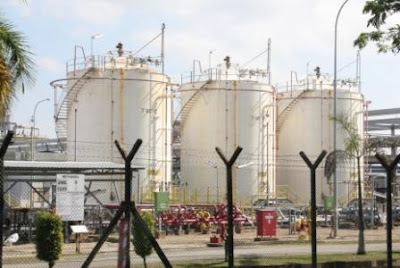 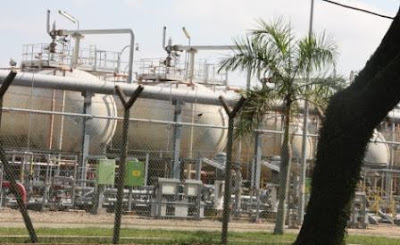 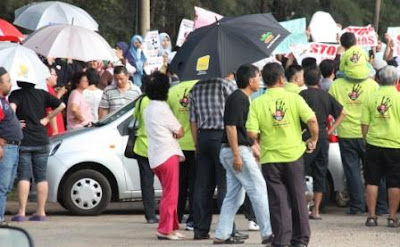 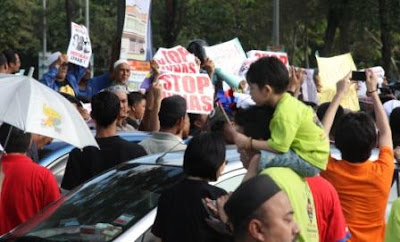 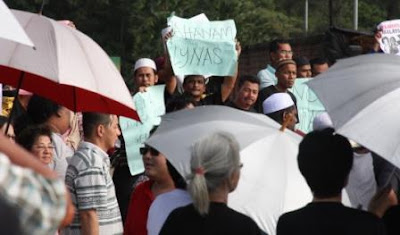 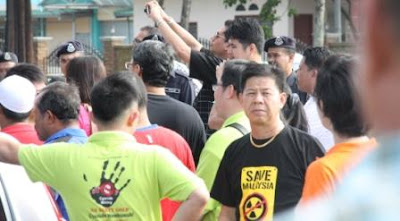 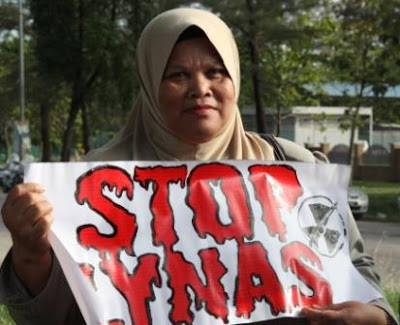 The day before the MB asked why only the Chinese were protesting Lynas. He was proved wrong again. 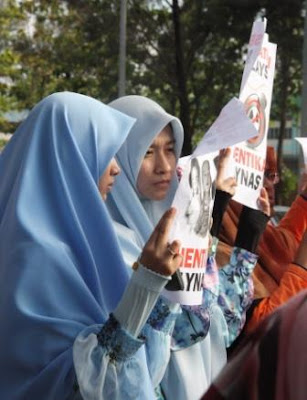 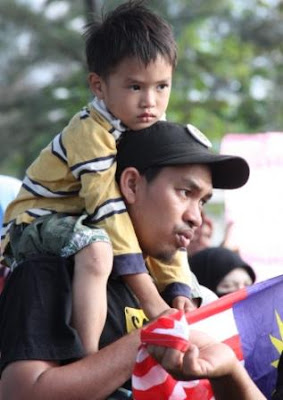 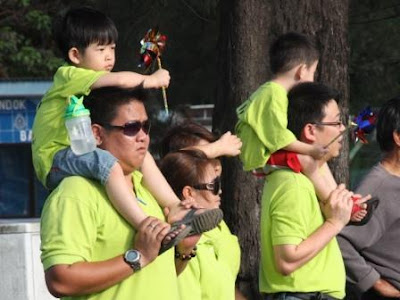 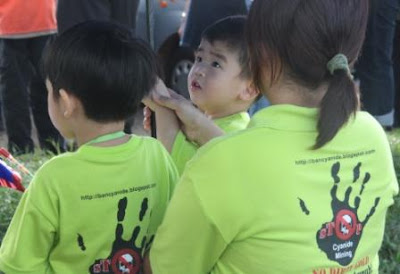 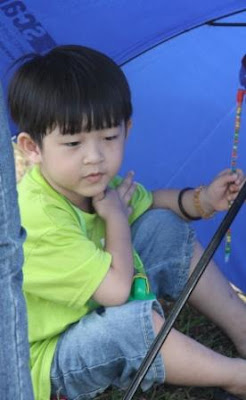 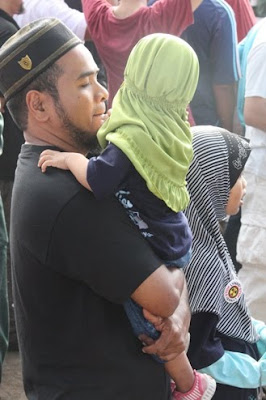 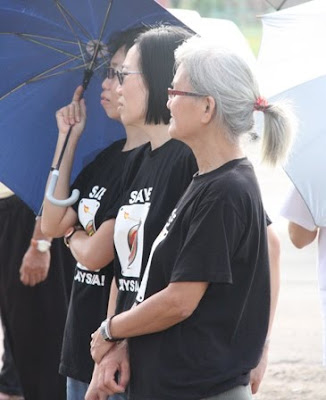 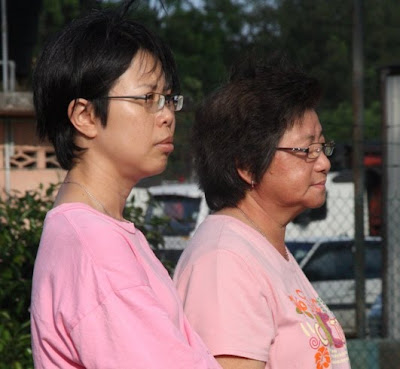 why mothers accompanied their daughters…. 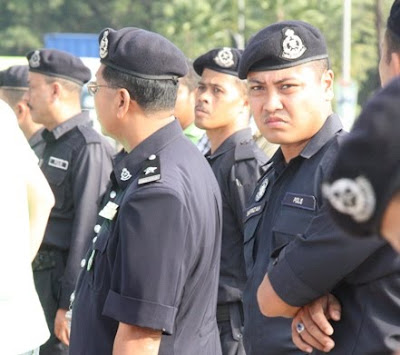 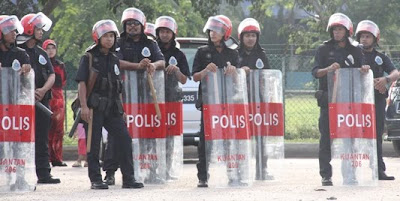 As usual, they were around….but they were different from what we are used to in KL.

In fact I went across the street to thank the officers. Two were a bit startled…..and by the way, they did not ask us to disperse.

On May 8 the Barisan Rakyat Bloggers will celebrate Mothers Day with the people of Kuantan, Pahang. Join the other thousand mothers who will gather there too.

Was an Easter Sunday well-spent.

A picture tells a thousand words. Thanks. Perhaps, there is another avenue to target. The Australian High Commission in KL. If the group is large enough, it may even get reported in Australia. Putting pressure on both ends is always better than one, after all they (Aussie government) is imposing the Carbon tax to have a better and cleaner environment, and yet their own Australian company is threaten the lives of others.

What comes out from the cacophony surrounding the 1Melayu, 1Bumi war cry together with the denials, support for and criticisms against it is that Malaysian politics is in a bloody mess. The lack of principle and moral among the UMNO leadership ( rather the lack of it ) stands out like a sore thumb indeed. Their deafening silence and indifference towards Utusan's (read: UMNO's ) racialism should be condemned by one and all. As such, it is understandable for MCA to call for a boycott on the rabid paper that Utusan is.

The scenario has turned out to be one where the true colours of the racists, fence sitters, pretenders, antagonists and those who do not have an inkling about what is happening around them are made apparent.

One clear and indisputable situation that every clear minded observer can conclude is that UMNO = Utusan = racists, the protagonists of the divide and rule call of 1Melayu, 1Bumi. The country can do without such divisive and destructive forces, and has enough of problems that plague the nation.

If UMNO's leaders, by virtue of being in the government and hence national leaders, are responsible and people of integrity, they would have by now condemned Utusan's racist call to the Malays to go up in arms against their other Malaysian counterparts.

Utusan cannot be allowed to run amok and run down the country in their moment of insanity!!!

Zorr, getting connected into your blog was like trying to pass through an eye of a needle...finally, after 3 weeks trying!
Australia is also lacking in morality when it comes to making money. I think Lynas is a bad story!
Have you heard the latest story from Australia? A Philippine doctor came to Australia to serve under the skill migration in the rural areas. When it came to approving his application for PR, he was asked to divorce his wife before the Immigration office grant him his PR....just because she was diagnosed with cancer.
Can you really trust a country with this immoral behaqvior?...perhaps, only the corrupted UMNO bastards will...anything and everything to bloat their wallets!

wanderer, there is a difference between Aust and My. The Doc's wife will eventually be granted a PR if there is a public outcry for such a treatment. Perhaps, she may be granted some type of status that she can have it renewed every 2 years etc (I am guessing here). Rules are rules and who ever process the application has to follow the rules, after all these are just junior officers. Such rules can only be override by the Immigration Minister, and in this case, could be one of them. I feel sorry for the doc and his two daughters. However, in Bodohland, no Ministers will ever come out and speak their mind off against their own party or government even they know that the government is wrong.

Your posting with pictures really motivated me. I am going to start gathering family and friends to join you there on 9th May to celebrate Mother's Day and lend our support to the people of Kuantan/Gebeng. At the very least, my family will be there.

Shout if you see me Adeline!May 8 not 9.

I follow, I follow.. and both my wife and our 6 kids too..
Which part of Kuantan Zorro? any sepcific colour to wear? what else you want us to carry? banner?

Frankly you are lucky its Aussie company doing the mining....Imagine if it is China Company.......then again and time and time again.....the main question that Rakyat needs to ask is What is their CUT in this project??

Is the cut only for Sultan Pahang, UMNO and Cronies??...then 100 Petronas also cannot feed their GREED and corruption....

Knowing Malaysia Judiciary, Army, Police, MACC, Sultan, EC/SPR Cronies all in the hands of UMNO-BN Racist.....what hope is there for Rakyat unless they continue their disrupt, weaken the UMNO SHAM Democratic tools....the suffering will continue...keep up the Internet Disrupt Daily.....Who knows one day its the straw that will break those company listed on my sites back....a matter of time and a mind set thing......Believe IT!!...

Don't be OBEDIENT to Racism, ISA, Murderers, Killers, Injustice and NO FREEDOM of RELIGION....

The environmental issue like that in Gebeng transcending racial divide. It's childish to suggest only the Chinese are protesting. In an event of disaster all communities suffer. The incumbents should take note of that when approving the project.

How much MB Adnan has to reimburse Lynas if the processing plant were to shut down?

To Kuantan ppl concerned with Lynas:
(SMS received. All are welcome)

The agenda of the meeting might be on the released EIA and what actions Pahang Bar might take against the state govt.

My Sunday was ruined by you guys. You people cause massive traffic jams and I was caught in it. Next time, maybe you should do you protests or whatever after midnight when there are less traffic.

Anon912pm. Massive traffic jams? We were in Kuantan....spelt KUANTAN...the capital of Pahang. Where exactly were you? You sound like those who ask others to fight your battles and blame traffic jams when some member of your family gets afflicted with some birth defect due to thorium.Smell the coffee, sucker!You are spending too much time on the commode - a plumbing fixture for defecation and urination.

Lynas 'demontration' on May 8th(Mother's day) at the beach of Teluk Cempedak, night time event.

No shouting like the demo in Gebeng. Its just a peaceful get together.