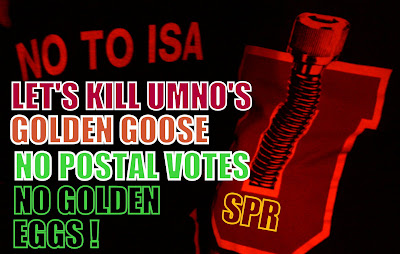 FROM kindergarten days we have been familiar with the goose that layed not ordinary eggs but golden eggs. In election parlance Postal Votes and Phantom Votes were such golden geese. These Double Ps kept the Barisan Nasional in power. No way were they going to let go of these golden eggs opportunities. The Ali-Baba formula kept the elite Malay and Chinese well "fed". Strange there never was the Ali-Baba-Apu troika. That should have been fair to the Indians. They were indeed marginalised. But Samy just had to wave his magic wand and the ordinary working-class Indians were happy with the crumbs that were swept off the tables of a few fattened bovines.

Although Phantom Votes still rears its ugly head at every elections, the alert rakyat of today are more vigilant and "ghost-busters" amongst the opposition parties have foiled this BN chicanery. But it still persists but to a lesser degree because SPR don't have eyes behind their heads and Mafrel seems deaf, dumb, and bat- blind. (Mafrel, remember the pics we handed over to you of Yen Yen giving out RM200 at Permatang Pauh? Mafrel FORGOT to send these pics to SPR, I am reliably informed.....we still have those photos, if you need them for your library!) Although the Phantom Votes goose is not as menacing, the ghost-busters need to continue to be vigilant.

Now all efforts by BN is to make sure that nobody touches the Postal Votes Goose. BN has reigned unchecked because the golden eggs were always available, although we know that distribution of those eggs have cause some ripples in the BN. I remember in the 2008 elections in Negeri Sembilan, Sothi went around boasting that he can never lose any election because the PD Postal Votes were his. Little did he realise that Khairy needed it badly at Rembau. Blood being thicker than water, the bags of goldern eggs were delivered to Rembau.

Will the postal votes in Bagan Pinang be reserved for the Menteri Besar of Abandoned Projects? I will be ashamed if the Army condoned corruption this time around. We can stop buses of phantom buses, but we cannot enter the military camps! We depend on the INTEGRITY  of military personnel to vote with their heart and wear HONOR on their sleeves.

Over the past few days, the Election Commission have been giving very distressing mixed signals about the present by-elections as regards to Postal Votes. PAS has unearthed some telling "misdeeds" and BN and the EC are burning the midnight oil to address what PAS will reveal.

PAS is not saying Enough is Enough.....that has become a cheap cliche....PAS is now saying: LETS KILL THIS POSTAL VOTE!

We all wait for the outcome of the meeting between PAS and the EC that I believe is in progress now in Putra Jaya.

Hawkeye too has THIS to say.

Zorro,
Could you web-link " More to read Here " for us to read the rest of the entry.

Yes Zorro and make it a Class Action Suit against the EC on their incompetence and bias-ness for not upholding the Federal Constitution.

Brother, the soldiers many of them are very loyal and at the same time they are being deprived of their rights as they are not well verse with such knowledge and always being kept in the dark with all kind of threats. That is the reality of our soldiers whom some of them are not even aware of their right and there is no attempt to educate this people as the officers(not all) are taking advantage out of the situation.
Time has come that an action group be formed up in the interest of the nation, since the ministers, the generals and ex service association don't bother to look at this.
Nobody cares actually except during election time.
Pity, pity the soldiers crave for liberty and winner, winner, BN chicken dinner!!! Lets hope the green uniform will have the courage that if no one cares for their generation destiny, this is the opportunity. My prayer is that they will rise to occasion and gone were the days of blind loyalty.

Pas is doing the right thing biting the bullet and taking the umno bull[cow] by the horn.Hidup Pas.

wow!! pakatan rakyat want army to vote for them? even after all the abuses, the foul languanges and whatnots! if i were to compiled all the comments about them from pakatan rakyat scums, they will chase u out of pd immediately..
hypocrite to a higher degree!!

A VOTE TO NOTE