IS THIS A CASE OF WILLING GIVER AND WILLING TAKER? 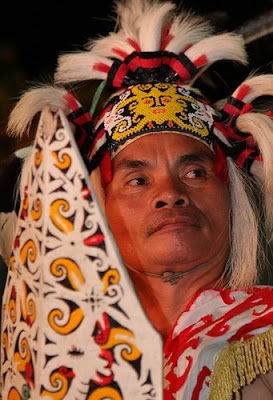 YES, no doubt about this. The Dayaks of Sarawak, once feared warriors in the Borneo forests, today have lost almost all their Native Customary Rights Land (NCL). They have been robbed blind
by their own Dayak politicians in collusion with the Taib's Triad. As MT reported the Dayaks are in limbo and they are losing their very important asset - land by the day! Taib engineered it, Dayak politicians saw it and did not do anything; some are unashamedly his partners in crime; Federal government is either too far away or couldn’t be bothered! However, I don't agree here. The Federal is concerned. They just tell Taib, " You do whatever as long as you give us the seats. You have done well thus far and your government can plunder, steal, murder, kidnap.....but you give us the seats to form a one-third majority government.....we will close both eyes to whatever you cook up, so no cock-up in Batang Ai."

So what now? Sit back and relax and just wait for what your Dayak politicians will bring along in their baskets; like little goodies? What has happened to your warrior spirits. Stand up and fight and get back your land. Read HERE, why you should fight for your birth-right.

The Barisan Rakyak have been told politely that we do not know Sarawak politics sufficiently for us to help you guys. Accepted but we still would like to help withoug leaving our shores. We pledge you that. You just give us the seed and we will nurture it FAST.

Nothing is impossible. March 8 2008 says so. But your poeple MUST be ANGRY. Your chief minister recently despised the Dayak way of life where in his speech during Agro Fest Day and condemned the Dayak forefathers for creating NCR land through shifting cultivation. He concoluded: "You see they (Dayaks) have 2million acres under NCR Land just because of shifting cultivation”

Allow me to quote my friend SAKMONGKOLAK47 on his recent tete-a-tete with Tun Daim Zainuddin:

On hearing this I quickly added- yes Tun. In the last elections there were 5.7 million Malay voters and UMNO managed to secure somewhere in the region of 2 million votes.

There you are said TDZ- 3.7 million Malays did not support UMNO. And he then quickly added; you tahu, UMNO has what? 3 over million members kan? Why did it get only 2 million votes?

Then there are the young. What has UMNO planned to rope these people in? You can easily say, out of 10 young people, 8 will likely vote opposition.

YOU GO FIGURE THAT OUT?

The BARISAN RAKYAT BLOGGERS were politely told in a Sarawak Blog that we do not know Sarawak politics sufficiently for us to help you guys. Accepted, but we still would like to help without leaving our shores. We pledge you that. You just give us the "seed" and we will nurture it FAST.

r your ancestors really the legal owners ah !? then, claim it back lah!
dun let the pendatangs eg. over here, the indon tukang gigi claims himself a bumi, son of the land pulak
...@#$%^&* !!

90% of this situation would depend on the Iban commnity themselves to decide when they have to cat their votes. If they want to remain where they are, then do not cry over spilt milk. If they want a change, as shown on March 08, they need to do what they have to. If they still sell their souls and votes for RM200 or RM500, some roofing sheets, a few generator sets, free diesel and outboard engines, then be content for the next generation to live the ways as their forefathers did. When the wake-up call had sounded loud and clear since the last Sarawak State and Federal elections, the Dayaks and Ibans can always opt to remain in their longhouses in the rural interior and wait for token Governmental relief when the floods come.
malsia1206

Yes, just give us the "bullets" and BR bloggers will do the rest.

BTW, Zorro, I used ur name as reference when I was politely asked how I know of the "weekly meeting" held in PJ tonite. Ur name allows me to sit in and watch the historical documentary of our nation. And I could not stay longer and catch up with u after that when I saw u "not in the mood".

Come on our Dayak brothers and sisters,its time now for all of you to stand up and be counted.BERSIH DID IT,HINDRAF DID IT.What are you waiting for?To be swallowed?Come on wake up,we are behind you.You deserve your rights and land,say enough is enough.Dayaks BOLEH.God Bless you all,my fellow Malaysians.Show that you guys are true warriors.GOOD LUCK.

down with taib!
down with bn!

power to the people! (j lennon)

Many East Malaysians are still oblivious or blinded BN lies. They need to open up, see and feel what's going on. The fastest way to awaken is to read the Blogs.

Zerro, you hit the nail on the head. It's very true that Dayaks lost their land because their own so-called leaders were either in collusion with Taib or too busy enriching themselves. Name any current leader or previous leader, they all didn't do anything. Once thing in common is that they all are filthy rich. Even DCM Jabu wealth is legendary. Past leaders like Leo Moggi is still enjoying getting freebies from TM. The only people who continue to fight for them are some NGOs, opposition leaders and a few courageous individuals. Those in the BN don't give a damn.

Malays are not stupid...they are now realising the UMNOputras are stealing from them. A select few will get all the contracts, and the poor ordinary Malay will have to work like all of us.

Dear Zorro,
For as long as Anwar is heading the PR,I will not be part of it.I do not trust this character since he was in govt.Much that I do not like BN,but if that character is there,I would trust the devil rather than the so called turnover devil.

If the people in Sarawak wants to remain blind to the robbing that is going on under their feet, then so be it.
One fine morning, they will wake up and find that even the land under their long-house does not belong to them anymore.
Brother, by then it is too late to cry for help.

WHAT LAND IN YOUR HAND?

Thank you for this post, Uncle Bernard and for taking the bull by the horns and speaking the truth without fear or favor.

I pray and hope many Dayaks will arise, unite and hear this clarion call to claim back their land and to vote for change. May God give them the courage to stand up for their beliefs and to guard and claim ownership on what is rightfully theirs.

You are spot on! They MUST be stirred, moved, convicted and galvanized to act before they lose what is theirs and theirs alone.

Blessings to you and yours and may God help the Dayaks.

I vote for the people of Sarawak to take their lands back to themselves. Those Taib and Chinese/ Malay businessmans are raping the state dry.

Sarawak Need the indelible Ink, Why?

I was once a boat man in Long Lama, Baram!

Anyone out here familiar with the swiftlets industry ?
The Sarawak BN or MT government has raided all swiftlets farmhouses, started from Mukah, followed by Kuching, Miri, Bintulu and so on killing all swiftlets, including eggs and babies without mercy in order to shut down the domestic farming business.
The hidden agenda is that all farms are to be relocated to the designated area developed by 'them' and also encouraging cave swiftlets industry only. Pity those farmers who rely on this business have to go bust ! Instead of drawing up a proper guidelines for swiftlets farming, these idiots chose the bad way.
Sarawakians, esp swiftlets farmers, it is time to show them your might !

- Sad to see this great nation Malaysia administered by the British Tuans, then handed over to the Malaysian TUANS under Bapa Malaysia Tunku Abdul Rahman Putra & his Malaysian cabinet of TRUE TUANS managing the system of Wesminster style Democracy & with the Rule of Law in 1957,

- getting "Hijacked & Betrayed" by the "Elite UMNO Ketetuanan BEGGARS" in 1969....some of those are still "Alive, Kicking & Mentoring ALL the New Ketetuanan Beggar Wannabes."

- To be a Public figure, one must be established, sincere, honest, credible, transparent & above board - should be opened to scrutinization like in the US.

- Many of our Leaders today have "skeletons" of their past in their closets (some have their family's baggages as well!), so how can they be "Honourable" to carry out their duties diligently without "Fear or favour", even after taking an "Oath" to the King/Sultan/the nation & rayaat."

- With their "Gutter Politics & Law of the Jungle" ala "Kindergarten style"....

- Ultimately they will "Buckle" under pressure.

- Desperate People, at Desperate Times, will RESORT to Desperate Henious Actions even if it means “Outdoing & Destroying” their “Honourable Family Legacy”, their own “MALAY MUSLIM HADHARI” party “UMNO” beyond “Redemption”, their component BN party, their Own Kind, this country & its Many People !

- Remember “What goes round, will come round to these Desperate UMNO Ketetuanan Beggars” SOON.

- "Lamenting" NOW on the "Re-cycle of his Own Legacy" that he "Initiated" 22 years ago has become the "UMNO Ketetuanan Monster" that it is now !

- All our prayers to God Almighty seeking “Truth, Justice, Freedom & Equality” will be answered.

- Every new day will be another “New Revelation” to reveal the “Truth” in its Self Destruct motion towards its “Demise”.

- Just give them enough rope to “Hang” themselves at every turn in their “Final” chapter.

- Justice will Prevail over Evil.