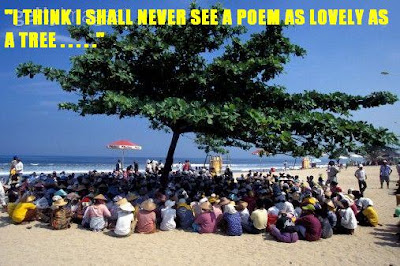 I couldn't make it back in time to post AZHAR'S piece on a Friday.....but what is a few hours late, yah? This is his 2nd appearance in this humble blog. I hope you enjoy it as much as I always do reading his two blogs. In appreciation to Azhar, I want to make my little contribution with a YouTube clip.

The "Tree Injunction" - my thoughts

I shall call it the "tree injunction". Not because it was granted under a tree. But it was obviously aimed to stop the sitting of the Perak Legislative Assembly under a tree and any other similar "unlawful" assembly.

Firstly, the question is whether Sivakumar should be represented by the State Legal Adviser. The Judicial Commissioner said he should be and therefore "private lawyers" were banned from the hearing. At the risk of being pedantic, I have to say, first of all, there is no such thing as private lawyers. There are advocate and solicitors. And on the side of the Government, there are Federal Counsel, or State Legal Adviser who appear in civil cases and Deputy Public Prosecutor or the Attorney General himself who appear in criminal cases. On the issue whether Sivakumar must be represented by the State Legal Adviser, an opinion has been rendered at Loyar Burok. I find myself in complete agreement with that opinion and I will not add anything.

Thirdly, I am even more puzzled and bewildered at the end result of the argument by Mohd Hafarizam on the first issue above. If what he said is correct, namely, that Sivakumar should be represented by the State Legal Advisor, and consequently Zambry also has to be so represented, wouldn't there be a clear and obvious conflict of interest on the part of the State Legal Adviser in this matter? How could he act for both parties, who are advancing, quite clearly, directly opposing arguments in the matter?

Fourthly, when asked whether the Tree Injunction which he obtained would cover the tree assembly which went on the morning before the tree injunction was granted, Hafarizam was quoted by MalaysiaKini reports as follows:

"For Barisan Nasional’s lawyers, the order which bars the speaker from convening “any unlawful meeting” covers the emergency assembly sitting held under a tree yesterday.
“Frankly, there is no time frame. So it should include the assembly held yesterday,” said Mohd Hafarizam Harun, in a text message reply today.
Mohd Hafarizam is one of the lawyers acting on behalf of Perak Menteri Besar Zambry Abd Kadir and his six cabinet members, who obtained the court order against Sivakumar yesterday.
Mohd Hafarizam argued that the speaker was served a notice of the court action on Monday while the sitting was held on Tuesday.
“So it would appear that it covers the (Tuesday) morning (sitting),” he told Malaysiakini."

If indeed Hafarizam said what he was reported to have said above, with all due respect to him as a fellow practising Advocate and Solicitor, I wish to say that that statement is laughable in its absurdity! I don't know what book on injunction which Hafarizam reads and what obscure 16th century case law on injunction which he reads - or case law of which country for that matter - but my 22 years of legal practice don't support what he said.

PLEASE CONTINUE READING HERE so that you will visit this blog in the future. Dont forget to come back here for this appreciation video clip.

I always love trees but like most people, I always thought a tree is just well, a tree. But after what happened in Perak, I am looking at trees from a different perspective and with great respect. They are so awe inspiring. In fact, I think our Prime Minister should be a tree. After all, the current one is a piece of dead wood anyway.

"he who plants a TREE plants a HOPE !"
new trees will be planted round to guard the 'yellow flame' today !