THE RETURN OF OUR DICKHEAD

For some time I have not written much about this dung because he has been discretely mute of late. That is until this morning and as such Mob1900 whacked him with this. 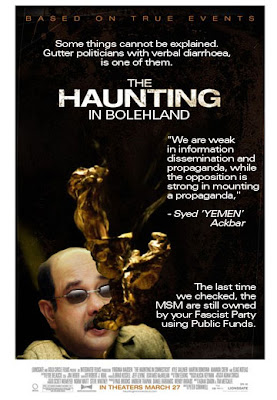 Thus I went online and this is what he said about the goings-on in my home state: ....."it was embarrassing for them to convene the meeting in the open air under a tree. This has never happened anywhere else. (This would never happen anywhere, not even in any banana republic, because nowhere else can you blatantly buy over the opposition with the rakyat's money? and nowhere else can a mere secretary go against his boss the Speaker, unless his balls are being squeezed too by u-know-whom!)

The dung continues......."People are laughing at us. I do not know whether to be tickled by this or concerned that they want to regain power at any cost." (Hey you pitiful piece of dung....you have to be careful what you utter....are you referring to how your boss parachuted in that Indian and bartered for the soul of the other four renegades....."to regain power at any cost"?)

Anyway, this dung's days in the cabinet are numbered, according to reliable sources, so let's get tickled by his escapades, documented by his biographer.....Mayfair magazine is bidding to be publisher, Hantu claims. 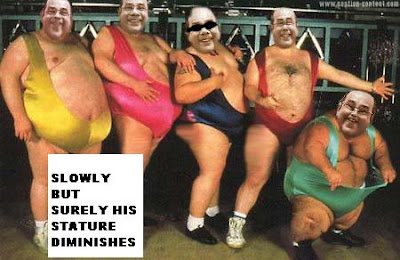 The author of this series of jokes has given permission to edit and make changes as long as the messages of stupidity is left intact. Here goes:

Boss: Where were you born?
The Dung: ….but bapa in .
Boss: I did not ask about your bapa. Which part of
The Dung: What 'which part'? Whole body was born in .

As Minister he was invited to see a demonstration and than a hands-on training on C4's potential and propensity.
Instructor: What would you do if the bomb
explodes while fixing.
The Dung: Dont worry, I have one more.

The Dung: (trying a pick-me-up one-liner)What is the name of your car?
Lady: I forgot the name, but is starts with 'T'.
The Dung: Oh, what a strange car, starts with Tea. All cars that I know start with petrol.

The Dung’s first job in a law-firm. 1st day he worked till late evening on the computer. Boss was happy and asked "what you did till evening?"
The Dung: Keyboard alphabets were not in order, so I made it alright.

The Fat Lady: That's a 500-year-old vase you've broken.
The Dung: Thank God! I thought it was a new one.
(This of course sealed his fate in the new Cabinet line-up)

At the scene of an accident a man was crying: O God! I have lost my hand, oh!
The Dung: Control yourself. Don't cry. See that man. He has lost his head. Is he crying?

The Dung: U cheated me.
Shopkeeper: No, I sold a good radio to u.
The Dung: Radio label shows Made in but radio says this is 'Radio 4, RTM! '

NOW THE ULTIMATE:
In an interview before he read Law. Interviewer: How does an electric motor run?
The Dung: Dhhuuuurrrrrrrrrr. .....
Inteviewer shouts: Stop it.
The Dung: Dhhuurrrr dhup dhup dhup...

This great joke deserves a full page in Page 3 of Playboy Magazine International, the magazine for potent men & women

Them ticklers are hilarious but lacks the 'ooomph' unless verbalised in your inimitable way, preferably over singles.

Ahhh .. true or not, that this brown baldie is on the way out in the next administration. Hmm .. isn't there an opening for a trade commissioner in Greenland?

On a another note, in 1402, Parameswara founded one of the greatest Sultanate which had its humble beginnings from under a tree.

Obviously, this brown baldie can't tell one 'bark' from another since he's accustomed to mix breed 'yappings'.

Backstree: Playboy is a literary magazine and they are discerning ablout jokes they print. The go for hilarity, not stupidity. Don't believe me, as Hugh Hefner.

OBE....as expected you are sinisterly cruel.

how in the world can someone be bodoh enough to admit that there is a need to set up a proper machinery to psycho people??

might as well suggest to enforce mass lobotomy to remove our senses la (when in actual fact, they themselves should volunteer to undergo the operation for the benefit of us all).

or better still, just stick an egg beater into his head and flick switch to full throttle.

Sai has been causing so much humiliation to this country ever since his Foreign Minister days. I was in Spore when they came to negotiate on the water concession. It was so embarassing to read on the local paper and watched the local news bunch of undecisive flip-flop officials lead by Sai running around the hotel rooms unable to close the deal.

Looking at the overdue Causeway left ruining, no thanks to this useless formal Foreign Minister doing next to nothing to fix the relationship for the good of both nations. How many Malaysians commute daily to Singapore bring food back to own country? Wasting 3-4 daily crossing the Causeway and the Malaysians Government doing nothing to help own citizens. Shameless scums.

Sai, please for goodness sake step down, you are not qualified not even a deputy post!

Put this dung dicko head into an elephant's ass. He makes me puke!

Specially to Syed Hamid Albar - Your Ministry had a Government Order gazetted to permit restricted usage of the word "Allah". As the Home Menteri, you are fully aware of the details of the circumstances on this issue (I have to assume you are indeed aware as a matter of fact). Then the Government makes a turnaround direction to have that gazetted order revoked. Am I correct x3 that your Goverment must only exist in a banana republic with such action? Who's to believe what next with your Gazetted publications? Yes today, No tomorrow? Please explain your foolhardy attitude and responsiblity to the Malaysian rakyat. Or maybe you would like to engage in an open debate if I allege you are personally INCOMPETENT with such incident occurence, especially when it touches so much a senitive issue as religion? Tidak apa attitude on your part, your Ministry or you like to point your fingers at someone else now?
malsia1206

Put the f'ler on a boat in a buaya-filled river and tell him to 'dhuuuuuuuuur' his way to safety.

..evidently this idiot is the son of a leaking condom.....

hahahaha a good one, my lord!

It is always shit shooting out from their mouths of 3 welldone figures, The now jobless dentist KT, The one in charge of cars & cows, AI and this Bull Shit Botak!

zorro, its so hilarious, dat i almost choke. perut ikan on me !!!
penang kaki, kk.

ke...ke...ke...having this bodoh fler as our Foreign Minister before must have been a huge embarrassment and biggest joke to the international community. I say we ship him back to the Middle East where he should belong!

he said if people got problems can see any minister one, even at nite if urgent, like ' saifool went to dpm's house for serious matter.'