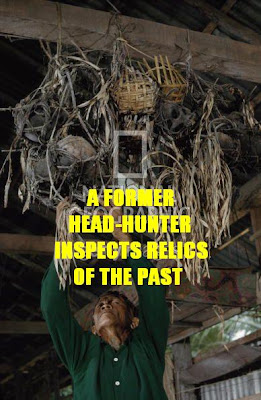 Since there is no likelihood of me being in Batang Ai to lend my lightweight support to our Sarawak brothers and sisters, I have been running a few postings on Sarawak Bloggers, highlighting their postings and their efforts to take back what was robbed from them - their Native Customary Land Rights. Last night I read this piece and it is appropriate that I feature it as my Friday Guest Blogger - The Sawarak Headhunter AKA Al Tugauw. He wrote on his sidebar:

I am a Tanjung Melanau, descendant of Saweng. No, I do not advocate violence, merely reform. The gory title is only symbolic, as are the images below, but the mission is real, to bring about the downfall of BN and a change in the government of Sarawak for the betterment of all Sarawakians. Email: altugauw@gmail.com

Timber - How Do They Cheat?

Sarawak Headhunter will make this as simple as possible so that everyone can understand beyond a doubt how Taib, his family, henchmen and cronies involved in the timber business blatantly cheat (actually steal) and shortchange the state so that they themselves can obtain maximum benefit and profit without having to account for it or pay the royalties and taxes rightfully due to the state and federal governments.

There are a few basic ways to do it, all involving under-declarations or false declarations, with the connivance of the state authorities of course.

First is to under-declare the volume or tonnage sold/exported. Next is to under-declare the grade and the price combined with false declarations as to the actual species and actual buyers. This involves nothing more than having 2 different sets of shipping documents drawn up and that more or less completes the method of operation of all timber scams perpetrated by them. Very simple and straightforward.

Don't the authorities know about this? Of course they do - they are all involved and everyone gets his cut. How does Headhunter know this? Just take a look at the official statistics on the Malaysian Timber Industry Board's (MTIB) website.

More valuable and expensive species are grouped together and supposedly sold as MLH or Mixed Light Hardwood, the cheapest timber, which sold for RM480 per m3 ex-logpond in in May 2008 compared to Dark Red Meranti at RM860 and Chengal at RM2,290. See the prices here.

But then, you may ask, why am I using Malayan prices?

The reason is very simple. Somehow, timber has managed to do the impossible and priced itself even below Malayan MLH. How is this possible, unless they (the timber companies) are cheating? In fact they have cheated so much that this is what has actually happened. Don't believe me? Where is the evidence of this? See the MTIB site here (Export of Logs by , January-August 2008).

First of all, even if we accept that ALL log exports are MLH, we would expect the FOB price to be higher than the logpond price because of transport costs.

Secondly, it is unbelievable that does not export any higher-priced logs of more valuable species such as meranti. If there are any such higher-priced logs, definitely the average price would be higher than that for MLH.

Even if only 10% of the volume of the logs was priced at an average of RM1,000 per m3, this would bring the average price per m3 up to RM505 and make a difference of RM132 million in revenue. Do you think it is only RM132 million that they have not declared?

To capture the difference, they use a mechanism known as "transfer pricing", where they will invoice a related company (controlled by themselves) the lower price and sum, and this related company, usually residing outside of Malaysia in a friendly lower-tax or even tax-free country, will then invoice the actual buyer the real price and sum.

This is illegal of course and constitutes not only tax evasion but also money laundering.

You can figure out for yourself the scale of their deception and how much these greedy pigs have stolen out of Sarawak's timber resources over the years, that is on top of whatever else they have stolen from the government coffers through one-sided contracts, over-priced, wasteful and unnecessary projects plus the costs of their mismanagement, misgovernance and maladministration. 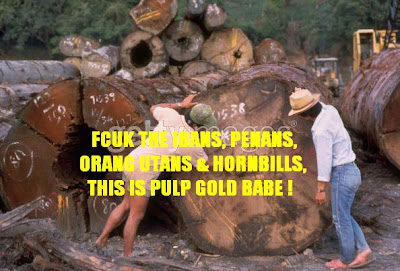 Q: What is RM1 billion?
Taib: The annual franchise fee anyone who wants to take over as Chief Minister must pay to me.
Q: But what if it's your son taking over?
Taib: Business is business!

Q: What is RM1 billion?
Taib: 2.4 million m3 of timber logs exported.
Q: But isn't that only Rm416 per m3?
Taib: Don't tell the Indians (and the Taiwanese, Japanese, Chinese and Koreans)!

Q: What is RM1 billion?
Taib: 2.4 million m3 of timber logs exported.
Q: But isn't that only RM416 per m3?
Taib: That's what I said!
Q: But wasn't the lowest price for MLH logs in at least RM480 per m3 at that time?
Taib: Those bloody timber guys must be cheating me!

Taib: That's how I cheat!

Sarawak politics has a simple equation. The Dayaks, Ibans and all indigenous natives in the State are getting a raw deal from the State Government in respect of -
1. oil palm plantation development because thousands of hectares of their traditional lands are gone with the stroke of a pen
2. so-called susutainable logging because their dependency on the rivers and forests for food is vanished
3. the recent trend for hydro-generated power because re-settlement of villages and tradtional homelands give them peanut deals in the name of future energy
If these affected peoples wish to continue their support fot the present Government, then they have no further privilege to complain their plights and conditon they now face with the onslaught of this rape of their resources. On the other hand, if they wish to stamp their protests and discrimination of these policies, now is the time for the wake-up call and start with the ballot boxes in Batang Ai. Their destiny. Their decision. Change we need. Change we must.
malsia1206

I am very pleased that you have identified the Sarawak Headhunter as your guest blogger. Al Tugauw is a passsionate fighter who is baying for some heads to roll!

One other key element in this fraud committed upon the Rakyat by Sarawak and Mainland M'sia Plc's involved in logging and sawn timber exports is the compliant connivance of Auditors.

These Auditors with their 'see no evil,hear no evil,speak no evil' attitude will blindly accept
'Letters of Representation' from Co Directors to cover their ass.

It's time to take the Auditors to the cleaners too!! Let the whistle blowers surface now!
http://donplaypuks.blogspot.com

ah, no cows and cars.