IMPLOSION OR EXPLOSION? SAME DIFFERENCE, NO? 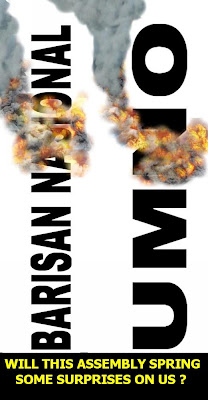 I doubt anything exciting is going to happen Zorro. UMNO is like an old scratched record being played over and over again, and the musical chair games begin with the music. Once, someone in the disciplinary committe of UMNO said to me, "It would be easier to pick those who are NOT corrupted in UMNO as there is only a handful".

if they reform, they are saved and Opposition chances of forming federal govt is diminished, if they don't then it's their own fault

Wah Admiral Tojo....salt air is really good (even PD's)for you sea-faring pirates. Miss you and midship(wo)man Rodi.Thought of you when whacking Sarawak Laksa and sepuluh tiga.

This UMNO guys will give impressive speeches laced with puntuns for their own alter egos,this time around to echo that they are solidly behind the rulers, a message intended to non bumis.Nothing good has ever occurred after this meet. this meet is just to make UMNO happy as usual.

Umno scumbags holding another of their racist-ridden meetings! What's new? Umno mutts are an insult to their race and humanity.

Nothing unpredictable but we have the most corrupted of UMNO Leaders implicated in Murder and Massive Corruption running the Country? Is such a shameless and unethical person fit to run the Country to oblivion which is a certainty?
There is no way the clean and the untainted Leaders like Ku Li could ever lead UMNO because the party itself has immersed in shit for far too long ?

The only solution is to throw them all out the next GE.

WHAT TO EXPECT IN EACH SITUATION