I don’t remember what time I left the wharf after our pre Bukit meeting to tie up loose ends. At the lights I get this call from , an SAS student of mine in 1979. Typical of him he asked: Where you sir. I told him I was on my way home from helping some friends drink beers in Taman Desa. And typical of Rif he threw the bait…..Sir we celebrating KJ’s win and Kamal says that he will buy a bottle of Macallan if I can make you come to Grove Junction. I asked who are the “we’ celebrating. The reply: Kavasan, Bong, Fendi, Rosli, Bulat. Dang, these were some of the last batch of students I bullied to success. I told , “ Tell Kamal where one bottle enough especially with Kavasan, Fendi and Bulat around,” Also, typical of my trusty 940, I was walking up to Grove Junction before you could say Jack Robinson 340 times.

I hadn’t seen these bunch for close to 6 months, so this was an appropriate semi-annual get together. Of course we talked about KJ and my blogging. They were afraid for me for obvious reasons. After four straight successive shots they said they were not afraid for me anymore. Dang, don’t ask me why but I suspect that they too might join me in striving for a better as anak bangsa .

Kavasan and Bulat (who is now nimrod slim) quarreled over who would buy the next bottle. At 2:40am, we were politely told that it is way past closing time and we headed to Penang Nasi Kandar at TTDI…..of course with whatever was left of the malt, because it goes hand in glove with soup kambing, admittedly the gods most wondrous combination. Fendi asked, “So who’s this Friday’s Guest Blogger…Raja Petra on Najib’s speech good lah sir.” Dang, I clean forgot about this.

As we said our farewell I asked, “None of you are KJ’s fan, so what’s to celebrate?” “Come on lah sir,” Bong said, “must have excuse to come out lah.”

Dang, I taught them well, no? 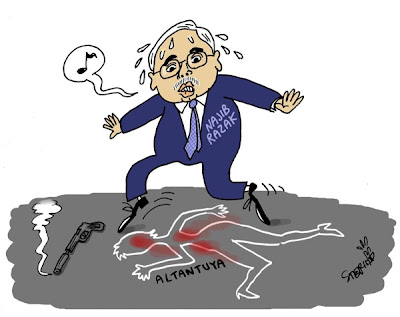 If there was one thing all observers could agree on about Deputy Prime Minister Datuk Seri Najib Tun Razak’s opening speech at the UMNO General Assembly for its Youth, Wanita and Puteri wings last night, it was how incredibly moving it was. So powerful was Najib’s oratory delivery that corruption — referred to as ‘money politics’ in UMNO circles — was effectively neutralised and eradicated from the organisation.

“I actually saw corruption dissipate from the hall, it was unbelievable,” said Roziman Musa, a delegate from Perak at the main PWTC assembly hall. “Before Datuk Seri Najib’s speech, money politics and vote-buying were evident in the faces of many of my fellow delegates. But as the DPM began his verbal assault on the corruption within UMNO, everyone was cleansed. Detoxified!”

A casual walk amongst the delegates revealed a cleaner, purer sense of being and an overall spirit of absolute harmony. 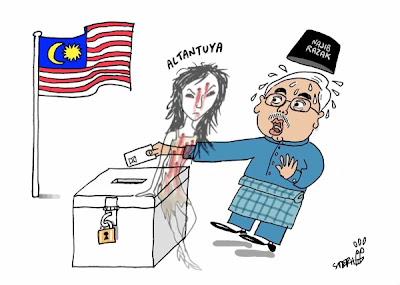 “I’m a man reborn,” said Jaafar Hussin, a delegate and senior UMNO member from Pahang. “I, like many of my friends, didn’t think twice about accepting money or contracts in exchange for votes before, but now I am free. I feel the wonderful void which all the corrupt thoughts have left behind. I am at peace with the universe."

“Thank you for the rousing speech, Datuk Seri!” he said, before running barefooted around the hall, throwing flower petals onto the appreciative crowd.

The sense of well-being was shared by every UMNO member nationwide, from top leaders to young members.

“We’re returning all our ill-gotten wealth to the community,” said Datuk Seman Azizuddin, a Terengganu branch chief and businessman when met at a hotel nearby. “My friends and I, who had amassed hundreds of millions of ringgit from our close ties to the administration, will now denounce our corrupt ways and live the life of clean, honest people, thanks to last night’s speech. What Datuk Seri Najib said resonated with the child within our souls, and released us from the clutches of our greed for money and power. We shall now embrace purity, selflessness and spirituality."


“Our crony days are over. Thank God!”

Puteri UMNO member from Lembah Keramat, Nina Badariah Ahmad, said that she now was more inspired to put her life into the party.

“Before this, I didn’t quite know why I joined, maybe because I subscribed to some of the ideals of the party, but mainly because I was intrigued by the power and potential wealth I could get my hands on,” said Nina. “But Datuk Seri Najib’s fiery speech has sifted all the impure and immoral reasons from the pure. He has killed all that is bad in the party. I am now in UMNO only for the good of the rakyat. Go UMNO!”

Opposition leader Datuk Seri Anwar Ibrahim, responding to this latest news, indicated that Najib’s speech ‘had rendered the purpose of the Pakatan Rakyat null and void’. 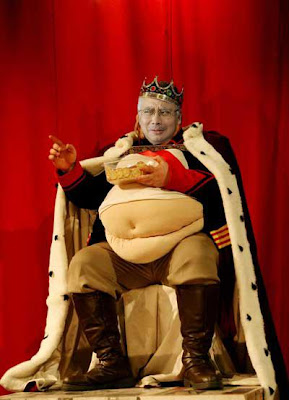 “Oh dear. I guess this is the end of PR,” he said over the phone solemnly. “We went out to the people on the promise of transparency, equality and justice, but now that UMNO is living all those qualities, with absolutely zero corruption, we’re pretty much dead in the water.”

“I mean, I guess you can’t win ‘em all. Even I was inspired by his speech; it brought tears to my eyes,” said Anwar, hinting that he’ll be calling for the dissolution of all opposition parties and a mass entry into UMNO, as soon as he can.

In addition to talking about choosing ‘clean and able leaders’ to take the organisation out of its current doldrums, Najib also spoke of UMNO being more IT-friendly and giving more attention to new media. Early reports have indicated that all mainstream printed media would abandon paper and offer their services online and for mobile exclusively, in effect saving trees and making the world a far, far better place for all our children.

Here is what some Indians feel about Anwar

Indians feel betrayed by Anwar in Bukit Selambau
read it all here
http://selamba-u.blogspot.com/2009/03/kaum-india-kecewa-dengan-anwar-di-bukit.html

Indians feel betrayed by Anwar in Bukit Selambau
read it all here
http://selamba-u.blogspot.com/2009/03/kaum-india-kecewa-dengan-anwar-di-bukit.html

hahahah our botak lost his seat, adnan too of the famous johnsonn clap too hahahahahah, am having a celebration here, cheers artic.

A good satirical piece and sarcasm.

Perfect picture of perfect government.Maybe, in out dream.

Nice one. That explain y u never pick up my phone call last nite eh?...Too busy mixing the malt...:)

It is amazing that a PR National Illusion is duplicated by the UMNO/BN National Illusion and by the main 2 protoganists. NAJIS & DSAI. Until both of them accept their responsibilities and own up to the truth, ANAK BANGSA MALAYSIA must press on and keep these 2 blokes in check. VISION 2020 & HARAPAN BARU UNTUK MALAYSIA are now empty slogans.Better bet to help DSAI and sincere PR ningcampoots (sure wrong spelling) to deliver their promises and also reformed BN MPs and ADUNs.

even though altantuya case has gone internationally. malaysia government / UMNO buat tak tau aje and celebrating they are getting a new leader.

celaka to all the BN component parties to hand malaysia to a giant monster who hands full of bloods.

Ahhh, it's been a long while since I've enjoyed a nice fairy tale with a happy ending.

For a while, I thought I was living in a different planet...and, about to get ready to pack my things and return to Bohonland. Ohh! what a blooming disappointment, the shit talking again!
Zor, you must have given him too many shots of your malt.

Must get our Hindraf Brothers to see that we are Malaysians, color and race blind. Issues of justice and fairness are at the forefront and not race.

PR must win at the two Bukits and one Batang.