DANG, MY INSTINCT WAS CORRECT ABOUT THE BIRD THAT BARKS. 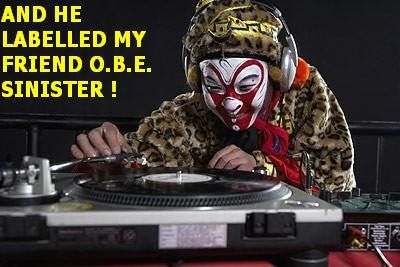 I am never good at riddles but one gift endowed on me, more likely nurtured from my 19 years studying students who studied under me, is that when I first meet a person, I like or I don't like that person. To date I have not been wrong. By the way, there are some who don't share my views, but I still like them although they may not take me as their friend lately. Over different ideologies I have seen "thick-as-thieves" friendship get shipwrecked!.....all because one says that that is a rock but the other says it is an outcrop. Yes back to my Basic Instinct. I met this CHARACTER in the National Press Club. I never liked him from the word GO. My friend-in-exile Pete proved my instinct correct today.Something off my chest now as I can now get up to the two Bukits without any distractions. Are you ready Old Blue Eye's?

Pete, wherever you are you will like this, always my favorite that I only share it with few.

And somebody complain that everybody is equal on RPK article

I very sian in naming that fella

People,
Read it from the right perspective lah!

The Bloggers Network guys are waiting for you all. Have fun you all. I've also got some little more info from the guys over the new posting. Broadband connection in Taiping ain't that enough for the coverage here!

Sorry, I'm not for sale
Whatever the size of bale
I simply let it sail
I know I mustn't fail

Let me relate two other 'stories' -

a) When AllBlogs was being set up in early 2007 after Rocky and Jeff got sued by the NST, and in response to the then (ZM) MOI minister's call to 'register' bloggers, RM tried to 'infiltrate' into the protem committee using his 'Seri Menanti' blog as a cover. When he failed to get nominated and be part of the team, he lambasted Rocky through his other blog, 'Barking Magpie'.

And to think that I was a shoe-in for the protem committee with Rocky's blessings PROVIDED I had my own blog which I refused to do until much later when you became an accomplice to Rocky's ambush on me at the NPC.

b) RM felt uncomfortable with me coz he thought I'm a 'g-man' as well because Rocky introduced me (to RM) as a SB plant within the bloggers' fraternity. Of course, it was said in jest but knowing RM's background, he didn't discount the possibility and besides, he didn't want any other competition for THAT job. Hehehe!

Anywayz, true to being sinister-like, there was an occasion in 2007 when I walked into NPC and saw RM sitting with Rocky. Soooo.. I joined them and RM said "Shar, I've checked your background and found out that you're fraud (I presumed he meant that I was not SB lah) .. yadda2.. and I replied to him (in front of Rocky), "What makes you think that you're the only one who have the resources to check someone's dossier?"

Hmmmm.. maybe I should put that pic of me standing in front of the FRUs during one of the candlelight vigil in a posting at OBE just to prove that I'm not an SB. Or maybe not. Aiyah, never mind lah.... I'm complicated as it is.

You mean RD and Pasquale aka Barking Magpie are one and the same?

Now that the gloves are off, is he going to sue RPK now ... heheh

that foul mouth racist who lambast everyone that stands for anything except UMNO.

now that he is exposed, lets hear his rants and raves. probably, threats with real explicits will be uttered thru his racist blog.

zorro, you may have a short fuse but good heart and honesty make up that shortcoming.

good luck you special bunch in the 3 bye-elections.