HERE IT IS AS PROMISED BY RPK. 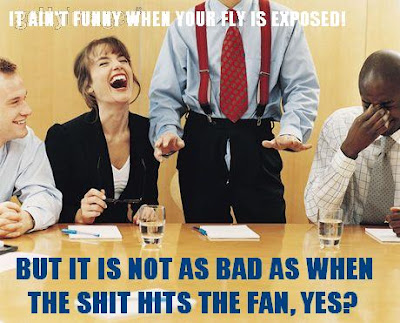 GO HERE FOR A REVEALING READ.

Merci beaucoup cher frère Arnaud, je l'espère, vous êtes bien.
The drinks on me when we next meet.
Posted by zorro at 2:27 PM

And they're on the loose!!

And yes. where is that photo? Who has it? Tuya's family?

The entire nation of followers, leaders and rulers who choose to play along, covering up and not fighting for truth to prevail are individually and collectively guilty of destroying Malaysia.

who else if not THE 0ne capable of doing so... NAJIB!

WILL FULL JUSTICE BE EXECUTED?

Bandit Najis had been cheating and robbing the Nation's Coffers for years with fictitious and non existent Defence Contracts by awarding these to his wife's nominee Companies.

Loser, Loser & Loser Najis UMNO & BN therefore the biased EC must choose the same date so that they can try to cheat by using Phantom Voters if the Pakatan is not too careful on all three fronts.

History will repeat itself the most corrupted of all, implicated with Corruption & Murder, call Najis will helm UMNO to oblivion.

Beware of the Najis & UMNO underhand deceits, filthy lies and dirty tactics which must be exposed so that they will be shunned by all Rakyats in order to be thrown out in the next GE.

The Era of Anarchy has just begun in the coming Premiership of Najis, the most corrupted of all corrupters, all Malaysians beware that they, Najis & UMNO, will spend Government Money to buy Chaos in order to impose Dictatorial Government without election or after they have lost the Election in GE 13, we have all learnt from Perak Government’s takeover by deceit and by force of using the Police Force which could be bought and the Assemblymen who were bought either with money or in kind like no case in court for their corruptions’ cases pending trials if they defect from Pakatan and of course the sole DAP betrayer could be bought with a great sum of money as Najis knew and as well as the betrayer that she could never be elected ever again in Jelapang and of course the pension sum must be huge including allowance for her permanent retirement for making a betrayal to Pakatan for short term benefiting of Najis?

There must be a good reason for the Sultan well learned in law and also once holding the highest office in Supreme Court took a lowly decision in support of the most corrupted Politician call Najis, PeeM in awaiting. No offence intended to the Sultan who was highly regarded until just now only, it is either he has been threatened with some secret files on him held by Najis, or like all the other froggies that had been lured by huge sums of money offered by the most greedy of Corrupters called Najis who used the nation’s coffers as his own kitty bank. Knowing very well that Najis would not last the next GE, this is the best opportunity to make some good cash funds for keeps as the next Government under PKR will be clean and righteous for the God, King, People and Country.

Not realizing that Corruptions breed even more Corruptions and this is the vicious circle and the people of Perak are ones who would suffer in the long run and they will not forget what a Sultan they have had. If Najis and UMNO is in Power it is most likely that the nation’s coffers would be decimated and there will be nothing left for our Children’s Children, therefore make sure the UMNO along with all their goons are thrown out the next election.

God bless you the people of Malaysia

The most damning thing about what sirul said in his police report was " when he went back home to collect the explosives!!!!! my friend do utk guys have explosives lying around in their house? and what controls are there for explosives? HOW IS IT HE CAME TO HAVE C4 AT HIS HOUSE? WAS IT PREMEDITATED? WHO WAS GOING TO PAY THE 50-100K??
NOW reading through the statements gives me time to ponder what kind, capability, what eucation level, where these keystone clowns/ bunglers were driving around and couldn't find Malaya hotel, taking a crap before murder????? is this p.ramlee comedy? and these guys got silencers from where? is it the sop of the malaysian police force? why silencers, are they assasinn for hire or govt paid> taxpayers money> are we indirectly paying for police murderers? hello PM, DPM, IGP, AG THE WHOLE CABINET HAS TO RESIGN FOR TARNISHING THE NAME OF MALAYSIA, and the stupid statements from the head of hospital serdang that the mob attacked the body of Kugan is beyond belief? the first pathologist who signed the first report happens to carry the title PROFESSOR OF PATHOLOGY> IT SOUNDS more like the professor of bluffology from the unversity of dropouts> is he a MARA grad? or did he sign the report without looking at the body, sign aje, water in lungs, sounds like a typical half past six umno appointed half wit. SACK THE WHOLE LOT OF THEM.

Now that's what I call investigative journalism. Shame it had to come from abroad. Our local journalists would not dare pursue this unless told too by their editors. Pah!

Can you clarify with RPK, the contents of the sirul's caution statement does not gel with RPK's claim of other people being there...i.e. rossie and 2 army general??

Honestly, go and conduct some survey what is the standing of our local doctors in the eyes of the international community. In as much there are many bad lawyers in practice, rest assured there may be many equally bad doctors too. The big differnce is the bad lawyers run away with their clients' moneys. The bad doctors can run with your very own life at stake. I suppose it really makes no differnce because when you get bloke with a bad lawyer, you are also as good as dead anyway.
malsia1206

All this fuss over the story on Najib and Altantuya in French newspaper Liberation can easily be settled.

All the writer has to do is produce the alleged picture that shows Najib with Altantuya in Paris.

That’s all he needs to do.

NO NO NO , not the doctored one pls !
tuya's dad should have it by now .

that Dubus look so gay... don't you think so?

this is also more revealing...

For the uninitiated here is a bit about this man RPK who is known for telling the "truth".
He once told me he is pro-monarchy and will die for it! I guess like a loose cannon anywhere he is psychologically unstable and untrusworthy with his words!
He was just a Raja by virtue of his father who was a member of the Selangor royalty and who died when RPK was very young. His father was a cousin to the late Sultan of Selangor. However, the present Sultan of Selangor was quoted as saying "RPK ni dah gila" or "RPK has gone mad".
His mother, if I am not mistaken was Welsh, also died when he was young. RPK was adopted or rather raised by Tengku Ampuan Terengganu when he was small. Not much is known about his childhood upbringing, obviously not a happy one. We have a lot more on his family and personal history, including a stint in a sanatorium in England, but will not divulge it since we are Malays with adat, we do not believe in shaming the entirely family for a sin of one father.
We even have compromising pictures of a very famous politician who wants to be the next prime minister. He was photographed with a male partner, clearly seen. But to quote TDM, "by showing it will inflict shame to the family". You see the government can also play a dirty tricks, the dirtiest if it wants to.
I liked RPK and had him and his wife at my place for tea and we had a good chat. In the beginning I found him interesting and clever. He also begged me to take him to see a certain politician, which I did.
He had wanted some financial help from this politician that I shall not disclose as promised, as I am a man who always keeps his word. I took him to see this politician because he needed financial help for his website. He was not entertained since we thought he could not be trusted and was obviously a mercenary.
He was at that time working for Tun Mahathir, at least that was what he said. He told me that if the person that I took him to see would pay him, he (RPK) would write all the good things. That was when we thought he was not being sincere and cannot be trusted.
How one man can get away with accusing and defaming others and can get away with it!

I know this strange bird that tries to bark. He did not say that he asked RPK one night at NPC, what was RPK's price to come across. Of course he will deny this. RPK won't if this bird challenges RPK.