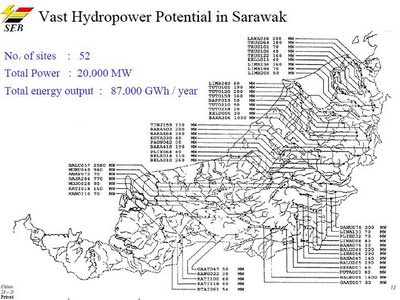 No, I did not forget to feature Part 1. I embargoed it for a more appropriate time and this is the time. Part 2 featured Fauziah's impactful interview of Jimmy Masing and his bland and lukewarm responses. Part 1 gives a good picture of what has happened and what is to happen to the Native Customary Land Rights. Dams not only dislodges people, it destroys the pristine flora and fauna of the world's oldest rainforests. It is unbelievable how the people of Sarawak allowed a family to have this octopus-like stranglehold and cancerous erosion of their rights. However, Sarawak has awaken and they have got out of bed and doing something about this. Leading this YES WE CAN make changes are a group of Sarawak Cyber Warriors....hunting down the thieves and maybe "beheading" the cancerous head(s). The Barisan Rakya Bloggers stand side by side and shoulder to shoulder with our Sarawak Bloggers.

It's not the hydropower! It's the logs! In building a dam, as the water level rises, it's easy to cut the trees on higher grounds and transport the logs on water. The gas from the boats meanwhile pollute the water making it impossible for fish to live.

Bakun is supposed to not only cater for Sarawak but also W.M'sia via a highly dubious and untested/undesigned undersea cable.

So, why do we need another 12 damns there. And reports are that all the directly negotiatioted contracts for these damns are going to 1 part and his relatives and cronies!!

Where is the M'sian Assoc for Cows and Cars when you need them? Surely they should not be wasting over 'elements' of abuse of power by a Speaker whose actions cannot by constitution be challenged!
http://donplaypuks.blogspot.com

Oh come on stop blaming Sarawakians for BN stronghold (it's not that we don't want to). We could ask the same thing about the west. How come despite Najis and Bodohwi, being only a drive distance away from your hometown, they can still get away with what they are doing?

Many Sarawakians especially in the dayak longhouses and malay kampungs are still ignorant about the BN leaders pocketing all the wealth and resources of the State.

A: Main causes of their ignorance -

1. the newspapers in Sarawak are all controlled by the big tycoons, the cronies of the BN leaders. The reporters in the employ of the newspapers in Sarawak are "angpow" journalists paid by the BN leaders to write good stories about them eg with pictures of Alfred Jabu releasing fish fries in logging polluted rivers which pollution had killed all the fishes there previously or of James Masing dishing out welfare assistance to flood victims which flood was caused by the destruction of the catchment areas and siltation of the rivers by loggings or of Taib's wife planting trees for re-forestations of the State.

As a result, the dayaks and malays in the longhouses and kampungs think that it is the companies that took away their customary land or timbers or which caused the floods or which killed all the fish in their rivers.

2. the radios and TV all glorified the BN leaders and demonised the opposition

3. the longhouse and kampung folks do not read alternative news or reports from the blogs, malaysiakini, malaysiatoday, harakah, suara keadilan, the rocket, etc.

5. the longhouse and kampung folks hardly understand the functions of parliament and State Assembly.

B: Fear and intimidation tactic, strategy

The BN uses various forms and means of fear tactics to intimidate the people.

1. the community leaders are threatened with dismissal if and when they oppose the BN or when the y challenge the big companies taking their customary land.

2. the longhouse and kampung folks are told that they will not be given "development projects" eg schools, clinics, electricity, water supply if they do not support or vote for BN or their children will not be given scholarship

C: BN given lots of money by the big companies for campaign funds to buy votes during election

There are 71 state constituencies in Sarawak. During state election, these constituencies are divided up among the 5 to 6 big companies in the State which the BN granted thousands of hectares of logging concessions, leases for oil palm plantations, licencs for planted forests, etc to sponsor.

3. the military intelligence also operates with the same objectives as the police special branch

Despite of the general sentiment for political or regime change in Sarawak, there are only a few credible leaders in the alternative political parties eg YB Chong MP for Bandar Kuching (DAP) YB Chiew ADUN Kidurong, Bintulu (DAP); PKR good party but no credible leaders so far; SNAP,none.

Therefore, voters in Sarawak until today are really in a dilemna.

I hope this will help readers for regime change, leaders of alternative parties, civil society groups will take note of all these in planning their strategies for Sarawak in the coming state election.