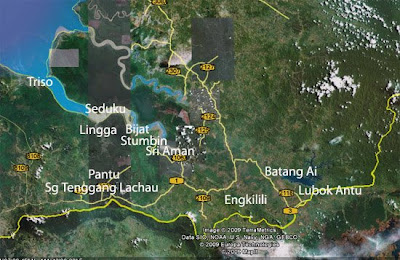 Just came in after a good meeting with Barisan Rakyat's Sarawak Bloggers. Know something? When BR Bloggers went into Permatang Pauh and Kuala Terengganu, we did not have any local bloggers to join us. Here in Kuching, we have a group of Bloggers, vowing to take the battle for Batang Ai to the all powerful BN machinery. Harris, Danny and I listened most of the time because these special bloggers know the pulse at ground zero. We too need to feel the vibes and as such Cobbolt John of DayakNation will pick us up at 5:00am for our journey into Batan Ai. Got to hit the sack now and it is going to be difficult sleeping so early.....

Do your best Zorro and keep it up. We need to get to know those from Sabah and Sarawak.

Sabah I have some exposure, having been there many times. Sarawak is still one state I have not been to yet. But it is always good to see people being able to take the lead in determining their own destiny and well-being.

I'm sure a shot of the good local tuak should knock out quite effortlessly???

bro,
Take care.....take real good care of yourselves there, esp you and Haris. Miss the chance this time but I know you guys can do more than words can say. Danny be cool ok. I'll make a toast to you brave souls. Cheers Bernard and Haris and DelCarpo

I just wanted to share with you a banner used by a Dayak (Iban) blogger for Ibans at Batang Ai. Below:

Hope this is just the beginning and more and more Sarawak bloggers and non bloggers will join u.

Anyway, it will be a long journey, have a good rest and takes lots and lots of water.

Zorro, Danny & Haris, we are proud of you guys. At first my resource partner and I were very disappointed of having to cancel today's PJ ABM committee meeting, especially after some of us have spent some time preparing our "homework" and waiting for the chance to do our presentations. However after some discussion, we understand that you guys have been given the missionary tasks and we guys the resource group to provide the support systems for our leaders.
Things are beginning to get clearer regarding our complementary roles and synergies.
ALL THE BEST AND MAY GOD'S BLESSINGS & PROTECTION BE WITH YOU, DANNY AND HARIS.
Waiting for you guys to return and share your experiences and encounters,

Parti Keadilan Rakyat (PKR) has named former Member of Parliament for Lubok Antu Jawah Gerang (pic) as its candidate for the Batang Ai by-election which is to be held on 7 April 2009, sources close to the party revealed today to Malaysiakini.

Bernard Khoo is a true pendekar.

Ruai bar at Green Hills (Peter John's bar) after Batang Ai. Some young BR supporters needs to be motivated by your team.

I heard that it's raining heavily in Batang Ai right now. Raining instant mee that is. Compliment from BN of course. Even those who don't own outboat engines also can get fuel "subsidy". Money do grow on trees as far as the people of Batang Ai is concerned.

Take care you all. Malaysians need to reclaim Malaysia back from the BN thieves and robbers.

yOU ARE BEYOND HELP ! get anwar out ! u will get support lah warft fool .

go here to see where Sarawak wealth is now, in Canada!

The handsome new home of Ottawa developer Sean Murray and his wife, Jamilah Taib (Daughter of Taib Mahmud), has shot to No. 2 among Ottawa's most expensive private residences, as measured by the Municipal Property Assessment Corp. (MPAC).

The couple's house at 688 Manor Ave. in Rockcliffe Park, completed late last year, is worth $9,609,000, assessors have decided. That puts it second only to that of neighbours Marlen and Michael Cowpland. The Cowplands' modern mansion at 234 Perley Crt. has an updated assessment value of $12,535,000.

The Cowpland residence has been controversial because of its ultra-modern look, which some traditionalists have grumbled is out of place in Rockcliffe Park, where many of Ottawa's most expensive homes are located.

The new home of Mr. Murray and Ms. Taib has a more traditional look, which blends in with older, and much smaller, houses nearby. Its construction has been the talk of Rockcliffe for months.

Well-heeled neighbours were impressed when the couple showed off their new home at a recent house-warming and Christmas party.

"It's incredible," one guest said. "It is not so much a house as a mansion. A lot of the guests were likening it to an old English manor. But it is a very new English manor."

The guest, who asked not to be identified, added: "There is marble and the colour of gold everywhere, and there must be 20 chandeliers on the ground floor. It's like a palace, really."

The home's proud owners also offered dinner for 14 at their residence in a recent auction in aid of nearby Ashbury College. The catalogue described the house as a "magnificent home gleaming with marble and gold." The prize went for $3,000.

The Murray-Taib home has cathedral ceilings throughout the ground floor, and about 12,500 square feet of living space. It takes up much of the lot size of less than one acre. It was designed by the architectural firm of Nicholas Caragianis.

MPAC's assessments are used to determine property taxes, meaning Mr. Murray and Ms. Taib will have a property tax bill of about $100,000. The Cowplands will pay about $130,000.

Like many home owners, both couples will get a bit of a break on their property taxes this year and the next two because the new assessments are being phased in over four years.

Assessors decided a home like that of Mr. Murray and Ms. Taib would have increased in value by about 14 per cent between January 2005, when assessments were last done, and January 2008, when the latest assessments took effect.

The Murray-Taib home took over the No. 2 spot from the home of Beata and Philip Garel-Jones at 120 Lansdowne Rd., also in Rockcliffe Park. Their home was assessed at $9,325,000. The couple bought it from technology multimillionaire Antoine Paquin for $8.25 million several years ago.

Michael Potter and Terence Matthews, two other technology multimillionaires, are fourth and fifth on the list, compiled by the Citizen from property rolls. Mr. Potter's property was assessed to be worth $8,443,000, about $3 million of which was in the value of land he acquired from his back-fence neighbour, the U.S. ambassador.

Mr. Matthews' home in Kanata was one of only four from outside Rockcliffe in the top 25 assessments.

The most valuable homes in Ottawa are owned by either property developers or high-tech moguls. The sole exception is Daniel Bellemare, one of the owners of Farm Boy fruit and vegetable stores. His renovation and expansion of a traditional Rockcliffe home has earned praise from residents who deplore a trend to demolish old homes in the village and replace them with much larger new houses.

Ottawa Senators hockey star Jason Spezza's new home did not make the top 25 on assessed value, even though he paid $3.75 million for the modern house on Mayfair Avenue, off Island Park Drive. The house had been listed for $6 million. The house's assessed value for 2008 is $2,316,000. That means Mr. Spezza will be getting a good deal on his property taxes, or the purchase price was high, or a combination of the two.

While we are busy with all this more and more palaces 'retirement homes' are being built at taxpayer's expense in the major commomwealth countriesby our beloved leaders.Ramalx

Good luck to all of you. I supposed you guys have taped that interview by that Masing fella and ask his people what he had really done for them all these years. Time for the winds of change to blow across Sarawak.

Greatly Appreciate your Strong Commitments ,Altruistic Actions & Valuable Time to be there in Sarawak to help the Sarawakians to achieve a political tsunami there.
Wish all of you the best in your endeavours.

Salutes to you and your team for your tireless efforts in championing the cause! Keep safe and ahemm...easy on the tuak please, thanks. LOL.

Maggi Mee rain! Wah, Sarawakians are so cheap to buy ah? How about asking the BN fellas to do bird nest rain instead? Or gold coins rain? Dont want no maggi mee, it's bad for the health.

I am quite pessimistic about the Batang Ai outcome, but I hope I am wrong. I think the rural Sarawakians have not woken up to the fact that they have the power to change for the better. The way to get votes is to bring a stash of cash to the kampung, meet the headman, do a powwow nego. Once agreed, you pash the bucks to the headman, and then the whole village will vote for your party. That's the way it is in Sarawak and Sabah rural areas. The opposition parties don't have the bucks to pass around, so they can't win.