NOW, AIN'T THIS A BREATH OF FRESH AIR? 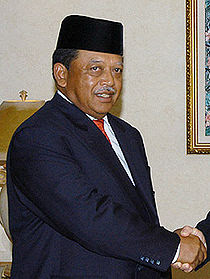 Tuanku Syed Sirajuddin was elected the 12th Yang di-Pertuan Agong of on 13 December 2001. This was earlier than expected because the Sultan of Selangor and the previous 11th Yang di-Pertuan Agong, Almarhum Sultan Salahuddin Abdul Aziz Shah Al-Haj ibni Almarhum Sultan Sir Hisamuddin Alam Shah Al-Haj, died on November 21, 2001 while his term should have ended in 2004. Tuanku Syed Sirajuddin's term ended on December 12, 2006.

I remember clearly that post March 8 2008, he was the only Ruler who did not accept the appointment of former MB and instead pressed for a candidate of his choice, the current Menteri Besar of Perlis, Md Isa Sabu. I also remember Blogger Minda Cergas on 14 March 2008, putting forward this poser:

God Bless the Raja of Perlis for making clear who is boss in his state. It is about time that the Sultans level back their power balance with the Federal Government. Now we pray to see if Sultan Mizan makes a choice that is in the best interest of the state or will Patrick Abdullah still hold sway over the affairs of the state.

Admittedly Sultan Mirzan, our reigning Agong, too disapproved the PM's choice and installed his own choice, Ahmad Said, as Menteri Besar, thus shooing away the incumbent PM's choice.

And what is this breath of fresh air? Read HERE.

Honestly, in such times when some are crying for the blood of those who questioned the Rulers, no Blogger can claim that this exhortation by the Raja of Perlis is "quite uninspiring."

BY THE WAY, HARIS AND AZMI SHAROM, I WILL HAVE YOU KNOW THAT THE RAJA OF PERLIS IS A SPURS FAN!

It's quite a refreshing view but we have been disappointed before. Unfortunately, most of the sultans chose to keep quiet even when they know things are not right in the country. The rakyat has no one else to turn to so naturally we are quite disappointed by their silence. One fine day umno will run amok against the sultans again like in the past. Will the rakyat stand by them then? This is something they should reflect on.

I have also shaken his hands and spoken to him when he was the YDP AGUNG, at the Penang free dinner at the kl convention center, langsung tak sombong pun.

That press release statement was definitely a first concrete move in the correct x3 direction from HRH. I read The Star carried another subsequent report from HRH the Sultan of Selangor as to the power-hungry Malays who are bent on destroying the Nation. These are open statements coming out from the Royal Palaces. Clear, concise and specific language. While the Royalties are above daily politics and non-partisan, they need to come out strongly with their views and conviction to protect the unreasonable and high-handed assaults from the Government (or Opposition) directed at their subjects. Remaining aloof and out-of-touch paint a negative impression in our minds. The rakyat love to respect the Royalties. At the same time, the Royalties need to earn this respect in a reciprocal manner. Change we need. Change we must. Daulat Tuanku.
Malsia1206

It is quite clear by now, the Perak impasse can only be solved by the Perakians. Their cries are clear and resolute...that they want to choose a govt of their choice. Will sultan Azlan Shah grant them their wish?
This is the best opportunity, for HRH to redeem himself and regain the respect, from his subjects by having the courage to put his subjects' interest above politics. The consequences will be grave if he erred in his judgment again.
He cannot be wrong if he went back to his subjects.

very refreshing, but dare we hope that words will be put into practice, will they practise what they preach? after perak (re: Sultan Azlan/Raja Nazrin) I cannot be all sure though.
Leo

This piece of news is rather inspiring we might add , unlike slanted jizsaws connecting devious killers to coldblooded murders which is quite unispiring tho we cannot really say much about rocks which became mud merely with one or 2 drops of unholy water

Cheers to the Raja of Perlis. As a fellow Spurs fan, I'm so proud of Tuanku.

Come on you, Spurs.

Raja Nazrin too has made a lot of politically correct statements and speeches.

There is a Chinese saying: A long journey will test a horse strength. Time will test a person's character.

What will he do or say when the crunch comes? or when the rubber meets the road?

I will just wait and see...i thought Raja Nazrin was a breath of fresh air..his views about corrupt leaders..blah blah,,etc etc..tranparency..voice of the people..then suddenly we have a tumultous Perak govt. And since then have not said anything.

btw, kugan's mum is totally broken into billion pieces after reading the 2nd report how her beloved poor child of her womb been tortured for DAYS * DAYS b4 R.I.P ! just imagine he is the beloved of anyone of us ....SIGH !

Anon12:03am
Yes I was impressed to by Nazrin's Malaysian Sun for everyone and many other mutterings. Beautiful sounding rhetoric unless translated into action are mere Public Relations picnic speeches or just what it is...words, or mere dreams...or just what we wish can happen (wishful thinking?)BUT THEN AGAIN, WHAT HAPPENED OR SHAMEFULLY, WHAT WAS ALLOWED TO HAPPEN IN PERAK, speaks volumes of frivolous speeches.

Oops Artchan above and also read Anon 5;23am.

Its refreshing yes,but don't get into a state of euphoria just yet.You have read it before as your other commentators said.A speech is but words to be translated into action.Till it happens don't hold your breath.
Dualat Tuanku.

These are the quotable quotes from Umno leaders:

"The leaders have warned the rulers many times about ethics and told them that they could not continue doing certain things. It is not necessary to talk further.
We have talked with the rulers many times before and it is now time for action." – Nazri Aziz, Umno Youth deputy and senator in New Straits Times, Dec 29, 1992.

"If rulers interfere in politics and it is proven, we want the Parliament to declare the election is illegal and cancelled. In business, if rulers’ involvement is proven, we should assume the business is illegal." – Nazri Aziz, Umno executive council member in Utusan Malaysia, Dec 3, 1990.

"I would like to ask, how insulted do you feel when the Sultan of Kelantan does not invite our menteri besar to give a speech on behalf of the people each time His Majesty celebrates his coronation day whereas the people had chosen the menteri besar through their rights." - Nazri Aziz, Umno Youth Exco in Utusan Malaysia, Nov, 30, 1990.

"A ruler will enjoy the respect of his people even without the immunity but with the conduct that is appropriate with his office. Though the issue is a bitter pill to swallow, our rulers must accept the fact that immunity is not God given." – Muhyiddin Yassin, Johor Menteri Besar, New Straits Times, Dec 27, 1992.

"A great idea or change cannot be stopped even by a battalion when its time has come. If he loves the throne he will make sacrifices to make the subjects happy." – Sanusi Junid, Agriculture Minister, New Straits Times, Dec 23, 1992.

"As the country’s highest legislative body, any subject is allowed to be discussed and concluded in the Dewan Rakyat, including matters pertaining to the rulers." - Zahir Ismail, Dewan Rakyat speaker in New Straits Times, Dec 15, 1992.

I hope the Royal Houses will remember these statements from UMNO when they make their speeches and 'royal decrees' in future.

Me? I only get inspired by the right stuff, even if it comes from an ordinary Malaysian.

SUltan of the Malays or SUltans of all the people are his subjects?

btw, where is the perak sultan hiding now???

Rocky has told us to tell you that you have been inspired by a mistake. It seems that the Raja of Perlis has been misquoted.

What is your take on this? I am still inspired inspite of the mistake.

yeah, it seems the Perlis raja never said those words, catch the correction in NST at Rockybru

Adam, since when did Rocky need a mouth-piece. I know the man well enough to know that he will tell it to me HIMSELF. Don't demean Rocky by saying that he "told us to tell you....."

Thruout life we get inspired and dissipated by many promises and utterances that turn out to be just hot air. That's life. no? Adam.

Shamsul, thanks and I did. Rocky is still on my blogroll you know?

Next time b careful of what you wish, especially if it was 'inspired' by NST.

I'm disappointed with you!

Why is Rocky's Bru back in your blogroll!??

And dont you sound off Adam for he was telling the truth of what was written by Rocky.

Know a fox to be a fox. As much as you would wish otherwise, it's still a fox.

Mate..
u got this wrongly..

I'm sorry to dissapoint you.. but the journalist are wrong.. :)
Thank God..