KT MAGISTRATE: WHAT'S WRONG WITH THAT?

The Barisan Rakyat bloggers arrived in Kuala Terengganu at 7.00pm and was greeted with the good news that PKR Youth chief Fariz Musa was released by the KT Magistrate court earlier in the evening. So what happened? It was alleged that Fariz was responsible for displaying and distributing pictures like these two below with the familiar "Take One" Message 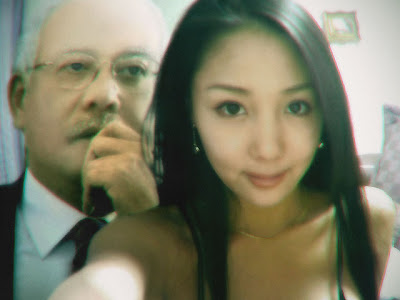 This State being a BN state obviously angered the authorities who immediately ordered the Police to arrest Fariz and 4 others. When brought before the majistrate, the police asked for a 4 days remand for Fariz and his group. After hearing the preposterous reasons why they needed 4 days, the Magistrate summarily told the arrested 5, "You are free to go" ROUND ONE TO PR/PAS. 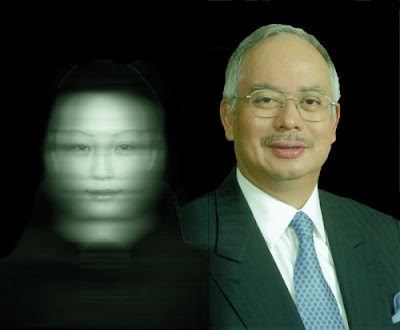 It was reliably learnt that the Prime Minister in waiting gave the BN campaign millions of ringgit at a ceremony earlier today. However someone in the crowd shouted: Cheque Kosong! Dang, these Terengganu people are quite naughty. But, on the otherhand, they should know better.

Feedback at 11:15pm has it that PAS candidate will win. WHY? An UMNO bigwig claims that Wahid Endut carries no baggage unlike the BN candidate who has connections with the controversial Monsoon Race. I believe the picture below will make its rounds tomorrow during Nomination Day. I already received this about 21 minutes ago. Signing off from KT.....unless something interesting comes in. 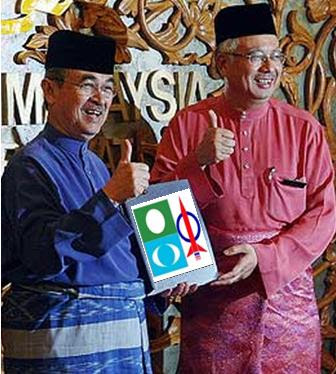 We just arrived KT and notice just down the road from our hotel, ceramahs have started from both sides even BEFORE nomination.

Aiyah, BN is wasting our money here cos sentiment on the ground is overwhelmingly for PAS the CLEAN and GREEN party.

we can't wait for latest update! All we know, we must vote BN out to teach them a lesson; all we need to do is make sure Pakatan Rakyat stay strong, and support each others!

Fantastic pictures you've got, nearly fell off the chair! :D

The big man of UMNO who has never met Mongolian Altantuya is now afraid of her posters/ghost, seems to be giving him nightmares and scares the wits out of him! How can, huh?

Thank you for the 'insider' update.
My respect to you & others (more you being a senior citizen) for the role you play in promoting change in this nation.

Hahaha! These desperadoes, UMNO shitheads think, with power, they can do anything.... Just ONE decent magistrate revealed all, the truth of the evil regime!
The truth of a evil son, who was born of a privileged family, who does need to earn his dinner...a PM in waiting! This is Bolehland.
Altantuya, you have spoken...let your ghost be the guiding light for a PR win in KT, let this the beginning and not an end, for your revenge trail.

Don't forget KT is the riches country in Malaysia & BN will find ways of winning. They are not letting it go that easily...!

PAS must have a list of existing voters. This is important...!

There will be a lot of 'Hantu' voters..! Please, please be alert on this

Don't believe the EC also. Don't even trust your own shadow...!

We never had so much guts till Datuk Anwar showed us the way.

Oh..! BTW who's millions are the Barisan using just like that without asking permission...???

A good one brader. I can only laugh from KL.
Keep it up, will support you guys from KL, just flash anything in your blog.dh9753

If we want BN to be more accountable and transparent in governing, vote PAS. Only a defeat for BN will they learn that we yearn for change.

Hi you guys...focus on the KT elections and NO toe sucking!!!!!Might lose the focus!!!

Best wishes you guys and bring back a sweet victory. Let KT be PP No.2!

After this there will be a new standing order for BN MPs. NO DYING IN OFFICE!!

Dear Uncle Zorro, my warm regards to you and your friends, who have been our 'ears and eyes' at every by-elections so far. Looking forward to your postings from KT. Cheerio!

That last bottom photo makes my day! Rather, it should make my days right up to polling in KT!
malsia1206

is that lady altantunya? she's so pretty...

great work and God continue to bless you and your family.
Truly aan amazing Malaysian, just like Haris and RPK.

see, both also thumbs up for PR !