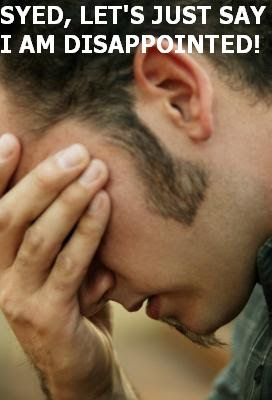 I have always said I liked Syed Nadzri, such a nice, unassuming, low-key type of guy. I knew him when he was a cub-reporter with Star. He used to take a bus to Sentul where I was teaching and just ask for the Selangor School's football fixtures. After many years we met at the unrenovated Press Club. I was over the moon when he was promoted to Group Editor and was honored with a Datukship.

Whilst I was in the group campaigning for the boycott of the Mainstream Media I made it very clear in my postings that I had nothing against journalist. I was only against the truth not being told. During that period, I sneakishly (OK Haris, I am ready to be slammed for this one, but I will take it for a friend in NST) bought the NST because I enjoyed Syed's columns. Truth be told, amongst the group, Tuesday was No Buy, No Lies Tuesday. (Yes, I will be fried by Haris tonight when we fish at the Wharf).

I still followed him on 5 Aug. It raised my hackles. But I brushed it aside. On the 19 August was definitely my last read

Syed, it was good whilst it lasted. We can still be friends but I read you no more. Take care Datuk.

He tarnished his reputation by a seriously biased reporting. He has forgotten how to uphold a journalist's objective reporting.

It was not Syed's call to write that piece I am very sure the 4th floor boys made the call .Syed is not that kind of person, come on Bernard you know him better . We cant blame Syed.

nst man: even if it was a 4th floor call I expected our friend in his capacity as Group Editorto stay true to his professional stance. How would that affect the young hacks? The pictures I posted tell a different story. If the guys who attacked the photographers were PKR fans, they should be punished and serverly. I am for that. Because I can empathise, I said I was disappointed. I did not say I was disgusted.

Moreover Kali could have written it, why shift the nasty job to Syed. Syed could protest, NO?

By the way... just because he writes something against PKR... so you decided he's bad?

Come on... now we have the PKR's VP denying everything... and as such... we have to then believe what Dr Syed Husin Ali said was true, that PKR is not involved in beating the journalists?

I don't know lah... Nowadays it seems everything PKR say or do is correct... every bad thing involved PKR must be someone else framing PKR...

Bentoh:
Did I say that Syede is bad? Dont you dare puyt words in my mouth. If you cannot understand the contents of my post, it is best you find other places to throw your rubbish. Read my last lines.If you still cant get it...FO

It sounds very bias , his writing there . Did somebody from PR offended him or he did not like what he saw in Permatang Pauh.
I believes that PR supporters should behaves better as we all wants Anwar to be back. As well as how we behaves ourselves when supporting or campaigning for Anwar is a reflection of Anwar.
Come on guys and gals, we already out numbered the bn goons there is no need to create troubles.
btw , did syed have a bad rotten day when he wrote that piece?

Zorro, the one who posted the earlier comment on Syed is not the real NSTman. I am the real deal. I have known Syed for 30 years, as a colleague and friend. He has sold himself to the devil for a few dollars more. His columns have become one-sided. I pray that he repents.

Between you and me, I buy NST too on the day Zainul's column is on. :-)

classic case, when they move up the ladder... most often than not their arse move up faster and their brain got left behind.

To both you imposters here ,please stop using my nick.I am the REAL nstman.and please dont comment about my Boss.

Will the GENUINE nstman stand up...the imposters begone. Please, I still like the man Syed Nadzri; I have reservations about the editor Syed Nadzri. Read whatever you please into this, but I will still knock glasses with Datuk Syed Nadzri, the young reporter I came to like in the 70s.

Eliviza sayang....what a surprise, your visit. Yes I too read Zainul Ariffin. How's Jeff and the other young man in your life, Luq. Will see you when MRT "resumes".

pls watch this u tube video.... sm 1 mst bring out... the student r poor and being threatened.... this guy won a lot of awards but not a good person.... we students have no to tell it 2

get ready to dp into your pockets again to raise funds to defend bloggers again. sure, i be there to contribute.
this idiotic administration is now going after bloggers for displaying the flag upside down. the intent of the bloggers is clearly stated which is to show distress and not to desecrate. yet, the sleepy PM woke up and decided to deem it as seditious. mysteriously after his call, a police report was lodged and with alarcity, the police has started investigation. wish the same cops are as efficient when it comes to solving real crimes. Remember Nurin? Remember Nini? Remember.....

To me everyone of you either from the mainstream of blogger if yu are not telling the truth or just publish something minus evidence or just from "somebody said", then all of you are liars or menyebarkan fitnah and are all eligible to be condemed by ALLAH. Free press yes but with evidence please.. as for muslim "memfitnah itu dosanya lebih besar daripada membunuh" so better for you and kill that person so kurang sikit dosa.

Long before the March elections, I too stopped buying the mainstream papers. Nowadays, i get all my news online.

Most blogs are so one-sided, it's as if we are living in a Star Movies movie. You're either a Jedi or have been seduced to the dark side. That's not how it works in real life.

Some people then ask... does this mean we can't write as we feel, can't we choose a side, be partisan, why must we sit on a fence, etc, etc. Unless you are a member of a political party, the only side you should be biased towards is justice and the truth.

Having read Syed Nadzri's column, IMHO he chose his principles.

I buy NST only for the CBT and Jeremy Clarkson..serious!

Syed Nadxti lost his principles after he got promoted. Period.

Wah! Looks like many people read Syed's column, and then try to fry the guy for what he writes. You don't have to agree with the guy. And you don't have to buy the paper or dump it on the strength of one article. At least Syed has an opinion and print it. Since when must you like or dislike the person to determine whether his column is readable or not? Grow up, all of you! Don't judge a paper on the strength of one column alone. You all are sounding like some jaded politicians!

As for all the NSTman - bull to you. You are all one and the same. You all have an axe to grind. Maybe you didn't get promoted or told not good enough and that's why you quit. You and I are the same - we hide behind our pseudonyms because we have skeletons in our cupboards too!

Syed - keep on writing. You write for yourself. Period.

i think all the mainstream papers in this country deserves one thing - CLOSED and SHUT DOWN.

Besides selling ads, papers has a moral responsibility to the people in the country to say what is right - not from the journalist point of view or politicians - but what is right or wrong in the way people are being treated.

malaysian paper do not have that moral integrity because everytime they are worried about their publication license being taken away by politicians.

blogs today are far more better when it comes to freedom of speech.

paper is good for political satire, gossip on entertainers and sports news.

guys, perhaps datuk syed nadzri knows something that we don't?

If anyone ever thought that money can't buy EVERYTHING in Malaysia, please think again.

Malaysia, being BOLEH-land, is indeed BOLEH in every sense of the word ... anyone can sell off his mother-in-law for petty changes, and that include everyone in NST, the Mongolia consulate in Malaysia, and so on .....

Face the fact, man. We Malaysians are a people with no dignity.