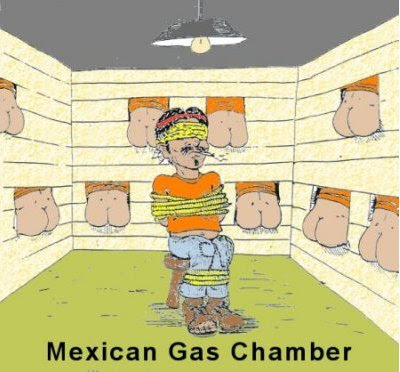 This is not a decent way to helrald in the next 50 years. Not decent, because I am incarcerating the Honorable Chief Justice into this dreaded chamber until such time that he can bring himself to tell us the truth, the whole truth and nothing but the truth. So God in all your mercy, help him. 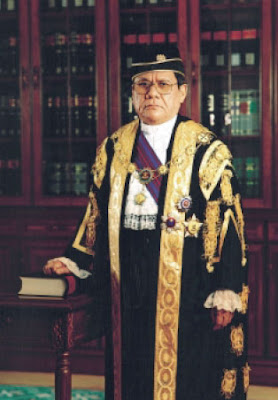 Chief Justice Of The Federal Court, MalaysiaThe Right Honourable Tun Dato' Sri (Dr.) Ahmad Fairuz bin Dato' Sheikh Abdul Halim S.S.M, P.S.M, S.P.M.K, S.J.M.K, S.P.M.S, S.S.D.K, S.S.A.P, S.S.M.Z, S.P.M.T, D.S.M.T, D.S.D.K, S.M.J, S.M.S, B.C.K, P.I.S
Over the past few weeks, the -should-have-been-retired CJ with 20 S(es) making up all those honorifics) has been merrily taking the public round his mulberry-bush. The Council of Rulers had already questioned his ONLY nominee for the long-vacant post of Chief Judge. To distract from the matter at hand, he opined that we could do away with the British Common Law. Great minds think alike and FOOLS seldom differed! I wonder if this still holds good in this here fair country?

He was accused of not being judicious in his choice of people he promoted in the judiciary. He was told that Federal Court Judge Hashim Yusoff was delinquent. Like all megalomaniacs he bellowed: "Show me the proof!" When further informed that the errant Judge had not written judgements in 35 cases, 4 of which the convicted are languishing in death row for the last seven years, he lamely replied that he will investigate if there was any evidence!

This is a layman's concern. What manner of Chief Justice do we have who is not aware that such blatant and flagrant misdeeds prevail during his watch. It is no wonder that one bad apple can bring disrepute to the whole barrel. When was accountability thrown out of the window with the baby?

And you know who had to have a say in this episode: loudy-mouth Nazri of course. He unabashedly cliamed: "Writing of judgements was not the only criterion to promote judges...." Maybe writing judgements come after apple-polishing and ass-smooching. If that is not the priority job of judges, what is? Eating kachang-putih whilst doddling?
Loudy continues, ...."Other criteria were patience and hardwork." Patience? Whose patience? 7 years in death-row waiting PATIENTLY for some lordship to put pen to paper? Hard work? BULLSHIT, Naazzzzrrriiiiiiiii. It is work SMART, not hard that is the prefered modus operandi today. Or haven't you heard of this before? It is not who you are, who you know, or who you ass-kissed that matters. IT IS PERFORMANCE that you are judged by.

Back to the CJ's search for evidence. DAP Chairman, Karpal Singh volunteered: "I have evidence right here and I can prove it in Parliament." That, invariably awakened the somnambalist chief exec: From what I heard (this time he did not say I don't know).....the Chief Justice has denied that the judge has failed to write his grounds of judgement in more than 30 cases.......the Chief Justice has to provide an explanation (not prove...ahemmm) for the allegation against this judge."

The PM further said it was disappointing to discover that there may be judges who had not performed their functions and dities adequately in the pursuit of justice. Loudy Naz, you heard that.......not patience, not hardwork....the PM says it is performance.

So we wait again with patience and bated breath for the CJ to unveil the needle in his hay-stack. Good luck. Easier you just tell the truth. Meanwhile the chamber awaits contributors! Volunteers?

pardon my ignorance... i never knew what is this ruckus all about until i read this. looks like i have been successfully distracted.

I have doubt your chamber have enough space to place this bunch of yo-yoes.

Penang-kia....that is why I put them one at a time for better effect.

Is the CJ getting an extra pay for the acting job of the vacant posts? If it does there is little wonder that he has kept it vacant for so long. After all an acting job as the name implies is just acting. You dont really have to work, just act.
Now they have finally filled the post of CJ of Malaya with consent from The Agong and the rulers council. I guess he missed giving the favoured one the chance of a lifetime to be elevated to a higher position by bypassing the more senior ones.

Senor Zorro, while we are fermenting the CJ, may I propose a renovation project to add more gas chambers?

There is mucho great backlog of inmates deserving of the chamber, and we would not wish the inmates to languish like those chaps on death row waiting for the good judge to set pen to paper.

I can assure you we have no shortage of volunteers to contribute to the chambers.

Apparently, Dato' Allauddin Mohd. Sherif dan Dato' Abdul Hamid Mohamed have been appointed as Chief Judge of Malaya and President of the Court of Appeals respectively, with the consent of DYMM Seri Paduka Yang DiPertuang Agong and HRH Malay Rulers.

Soon both with take their oath of office, infront of DYMM SPB YDP Agong soon enough, although too much 'rumours' before this thread on the line that the Prime Minister's nomination/s had been rejected in sundry by DYMM SPB YDP Agong and/or HRH Malay Rulers.

So it has been resolved then and the new Chief Judge and Court of Appeal President, as put forth by the Government via the Prime Minister will report to work in no time, regardless how and what people say, especially the opinion transpired through the net on this subject matter.

I can only summarise this up by reiterating the fact that the DYMM SPB YDP Agong and HRH Malay Rulers still have to 'listen' to the 'advice' of the Government, via the Prime Minister, like it had always been exactly 50 years ago tomorrow.

That, my fellow bloggospherians, is called "Constitutional Monarchy 101".

besr case scenario, this CJ truly doesnt know whats going on. worst case scenario, he knows who are the errant and non performing judges. yet, he protects and promotes them to their level of incompetence and consequently brings the judiciary to this low level.
meantime, this CJ continues with his insidious plan to replace the well tested and accepted common laws with his preferred syariah laws into the legal system.
all this with the tacit support of the PM. if not, how else this CJ continues to remain where he is. isnt this scary?

I was asked why I want to risk my neck and post blogs in yr blogsite zorro...

so I guess the truth is..
(you gotta be malaysian to understand my "truth" ya?)

Lie MORE & you get cash + no punishments (Mohammed2 of Aussie fame)

Best one: TRUTH with Proof?
YOU give the cash ...
+ Law suits (they took the page fr Singapore Lee Kuan Yew)
+ ISA
= free meal on taxpayers lah!

So this is the ONLY Justice we can get in Msia..

Now I recommend that we change the title of our laws from "British" to "Malaysia", then

we translate it anyways we wanna + Sprinkle liberally with "our" set of Syariah laws
and VIOLA!!
MALAYSIAN LAW !!!

That is gonna happen folks!!

BTW they are now gonna sweep the 30 cases not written sad "lie" under the carpet and I PROMISE you we will hear NOTHING MORE of this matter...

Or I am NOT GobloKing!

In response to bigdogdotcom's comment, if these two appointees were the most senior members of the bench (and assuming that this is the normal criteria), then their elevation should not have been delayed for a number of months (8 in the case of Court of Appeal).

If seniority was the criteria, the appointments are no-brainers. These two judges would have been a shoo-in for the top two posts. So the question that will now be unanswered is - why was there a delay ?

Did the Conference of Rulers object to these two appointments? Or perhaps these two were not proposed in the first place ?

Hi Zorro aka Mr Bernard Khoo. Wishing you a Happy Merdeka. If there is one person in this beloved country of mine to nominate for a "Gemilang Malaysian" award, I would say you would be the ideal nominee, SIR! Yes sir, today my heart bursts with pride to know that my teacher is a true patriot and an exemplary citizen. I have been busy of late and even though I used to glance at your blog and been unable to post any comments for some time, I would like to salute you today the 31st of August, 2007 on our country's 50 anniversary of independence. Please keep up your "perjuangan" as it is only men like you that will lead us out of the morass that we have got ourselves into. I pray that the good lord gives you many years of good health and strength to take on the demons that are destroying Malaysia. MERDEKA!!!

It does not matter whether they are the most senior or were earlier proposed or otherwise.

What matters most is the HM Seri Paduka Baginda Yang DiPertuan Agong and HRH Malay Rulers EVENTUALLY (assuming that the earlier nominations were rejected - no proof what so ever of the rejection by HM SPB YDP Agong and/or HRH Malay Rulers) accepted the two, which was nominated and advised by the Prime Minister, representing the Government of Malaysia.

Anyone can speculate till the cats grow horns and come home, BUT the FACT still remain, Dato' Allaudin and Dato' Abdul Hamid have been appointed.

Fact also clearly illustrate again, as it has been for 50 years, HM SPB YDP Agong "adhere" to the advise by the Prime Minister, representing the Malaysian Government.

And that is how Constitution of the Federation of Malaysia been practiced and implemented, for 50 years!

Can any mortal change this? Sure, do it through the Parliament!

JAS. I am humbled by your tribute but will continue to strive to be better in whatever I do.....for this my country.

I did remember, asking you to connect. How ABOUT IT ? Any wed. or friday at the National Press Club!

May I suggest you put the PERSON not the OFFICE he holds in the chamber.

Misben....I put the man not his position....the chamber is for people who can breathe. Take another read. Tks for visiting.