IS IT TIME FOR OPTIONAL RETIREMENT? 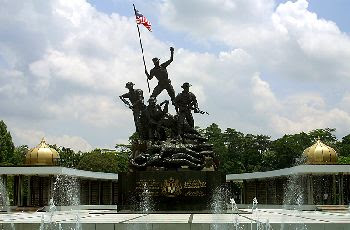 I told myself that for the next three weeks I will take a respite to savor the company of my three grandsons, Bernie, Ryan and Patrick and not be distracted by what is going on in happening Malaysia.

But being a hard-core, die-hard senior citizen patriot I have to put my country before my extended Bahamian family. (My daughter, former Assuntarian, Patrina, resident in Nassau,Bahamas for the last 13 years was offered Bahamian citizenship. Aware that Malaysia does not entertain dual citizenship, she refused the offer and prefered to keep her Malaysian citizenship.)

QUESTION: What is Patriotism then? Dying for the Government? NO. Laying down your life for the country? YES! Obeying the edicts and seasonal changes in policies? NO! Obeying and living by the Constitution? Unquestionably YES. Flying the National Flag? NO. Respecting the National Flag? YES! Bowing, bowing and bowing to the reigning Agong? NO! Stepping forward to take the bullet for the Agong (assuming his bodyguards were not adept enough) YES, YES, YES! Supporting the Cabinet Committee for Sports, the Sports Minister, the National Sports Council, or the State's Sports Association? A jeering NO. Cheering our national athletes when they falter and encouraging them to do better the next time? YES!

That's my dua-sen definition of patritism. I take comfort that I have done my simple bit living by and believing in these.

I used to start the day well with the comics pages. Lately, all positive vibes just goes pooofffff when I skim the local news. So now I do the opposite. But to no effect. Negatives thoughts about our country still needles me.

At my age what do I want? Like all grouchy old buggers, still not satisfied after 50 years of Independence? No, not totally satisfied, especially after 50 years. Over those 50 years we have progressed structurally, but not culturally as ONE MALAYSIAN RACE. Have we a Malaysian Culture? We have escalating crime, rapes, murders,et al; questionable security; worrying rampant corruption; racism; cronyism; close-one-eye-ism; incompetent and snail-paced civil service; poor accountability and total lip-serviced transparency; questionable human rights practices; a religiously partisan mainstream media; repressive laws like the ISA; cya (cover your ass) laws like the Official Secrets Act (OSA); and an affirmative action administration that favors top cats and fat dogs, thus leaving, after 50 years, an embarrassing segment of our poeple still under the poverty level.

Truth be told I just want PEACE AND SECURITY for this country to evolve as one Malaysian Race, A Bangsa Malaysia.

Yesterday, at Putrajaya, the Minister of Education, at the National-Level Unity Assembly and Integration of student Leaders, complementing the existing Pak Lah initiated Student Integration Program for Unity (Rimup) said: "We want them (the youth) to understand that in a coutry where the official religion is Islam and the majority of its people are muslims, other races are still allowed to practise their religions in peace and harmony." This, I have to take with a barrel of salt! It took 20 years for the approval of a Church in Shah Alam and it cannot look like a Church! Wasnt a hindu temple got bulldozed in Malacca a few weeks ago? The minister should apologise to the 1000 participants for his keris-wielding antics. He should be waving the Contitution when he declared to the assembled youths: The Ministry is serious about efforts to develop the nation and Bangsa Malaysia according to our ingredients as envisioned by the government through Vision 2020." (ingredients?)

He continued: (and Ghani down south will not like this!) "We will be able to create a Bangsa Malaysia with strong identity, patriotism, and high moral values in line with our caring democratic and tolerant society." A gargantuan undertaking and we wish it will not reflect what the BeeGees sang.......Its only words, and words are all I have...... yes, like all politically-motivated pronouncements will it end up in the glossary as motherhood statements, pregnant with well-intentioned meaning, but stillborn. Coincidentally, the assembly's theme was "Patriotism is our Survival." 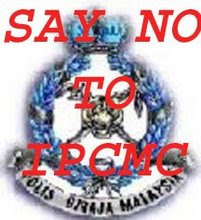 Security?
The Government, I may be wrong, has no succession plan for its civil servants. They push up a fellow just before retirement so that this guy can enjoy in increase in pension. Depending on who you know and not what you have done, you may get an exgtension (to do some damage control?).

Full of fervour and enthusiasm the IGP who won a 2 years extension promised errant and corrupt cops will face the music. Bet you this is another motherhood statement. Sometime recently a Royal Commission was set up and an elite array of people-who-matter were appointed on this commission. Its job was thorough and most professional since the public participated. Amongst many things this commission proposed the IPCMC. But this same IGP and his second-liners literally gave the two fingers to the commision. They categorically refused to implement the IPCMC. Strangely, some citizens even supported by "Say No To IPCMC". I just wonder it is a giver and taker game being played out....even in blogosphere! Resulting from this rejection, the crime-lords have gone on a Mardi Gras rampage. Our security is being compromised by the very people who have pledged to protect us.

So is it time for this Government to opt for early retirement? Now, even the Police dare disobey the Commission the Government initiated. Never overstay your welcome we are always advised. I believe at 50 one can opt.

patriotism? sorry, cannot be found here... some morons killed it long time ago.

But lately, it's hard to understand...

I think I'll settle for the simpler things in life, like appreciating our family and appreciating the friendship the Bloggerhood has created.

I think we can take it from there...Let's love one another; loving the country becomes natural then...

Daph darling, spoken like a true-blue patriot. Much cheers. Will you come for the 25th do?

Why optional retirement... retire for good!

Ever seen a picture of Hisahm while he was brandishing the keris in umno AGM last year? Both eyes closed, mouth somewhat agape and face muscles contorted. It shows that he was in a state of ecstactic pleasure. Has he any credibility to talk about 'Bangsa Malaysia'? You tell me. The true meaning of the two words is inevitably sullied the moment they leave the mounths of politicians like Hisham...

as long as one is still able to contrbute you can't... retire for good.

never mind the english teams but i think watching football together is patriotic enough. just like we did last night, amongst the muhibbah neighbours.

as Nick the singhalese fella put it nicely, the Original Muhibbah.

Spot on danny. It was picture perfect.But your dad is considering rental of wall space as screen, and the singhalese for connection and Jeff for length of wire input....I will charge for the beers next match.

Hi Daphne,
25th August is the Bangsa Malaysia Merdeka do and blog house launch,
Do drop in at people's parliament blog to get details and invite.

Pls check this out..the minister of education plans to raise the keris again in the upcoming UMNO Youth Assembly!


Nothing we can do about it! Just sad and upset!

Your daughter should have taken the Bahamian citizenship. Is it too late to accept? That way you can go as well to live with her.

I strongly encourage all Malaysians who are non-Malay and non-Muslim to migrate at the 1st chance they get. This bolehland is going to the dogs!!!

Unc bernard , first timer in ur blog, what can i say except , i salute u . and ur face reminds me a a army cook in the royal engineers , sgt wong . u stay cool unc,, god bless