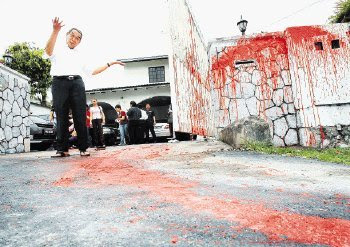 NST yesterday front paged the disappointment of all Barisan National component party leaders and opposition leaders over the no-show of the RM2.4million indelible ink. Rashid himself says the "smear" campaign was politically motivated. Probably he has his opinion on this, being the most hated man on both sides of the divide. But if it was politically motivated, the splash would be black ink.....but this is
RED PAINT.....and who do you associate this modus operandi with? Could it be that the vendor who was promised a 2.4million ringgit windfall is now so mad that he hired some local Ah Loongs. Worth pondering. No? And do expect Rashid to consult MCA Mike soon.
Yesterday, Rashid was red-faced, and now his homestead is also red-faced. My 88 year old mother always said: Don't play play wth ink....hard to come off.
Hantu believes that no ink was bought. I too believe him.....just wait...the truth will come out.

Is he looking forward to Green Paint next?

Red paint is still okay, my friend. Imagine what would happen if the perpetrators threw C4 explosives?

The fellas who threw the red paint screwed up!

They should have dumped tons of those black indelible ink all over this idiot's place!

That would really have made our day!

piece of shit borrow from ah long to buy his bungalow n can't pay up.

Actually this was the work of UMNO's Mat rempit. Rashit promised to deliver Kelantan on a silver platter, but now it looks like BN is going to lose Penang, Perlis, Kedah and Trenggannu as well. So the Redshit is in deepshit.

Malay Women in Malaysia....you are too explosive for mild mannered guy like me.

Anon 8.38....ah loong had nothing to do with payment for his house...ah loong has not gone into government loans yet...I think. His house was given gratis for work done for the BN, way beyond the call of duty.

well, Red is for rocket see...and these guys do like to connect dots you see. Just like when Uthayakumar says he will fight like a tiger, some dreamer connects the dots and does a Google Search on Tiger and walla, Hindraf is a Tamil Tiger outfit. So when I say green ..I guess since you not so imaginative as our dreamers....very hard to explain la...Maybe after the 6th beer tonight I'll get inspired enough...and then let me do the honours.

Anyway, today's NST front page, (o.k. la, sorry I bought the bloody thing,) Badawi asks "What will happen if there is chaos and instability?"

Of course I not so clever as them in connecting dots la. So I have to ask questions and I am only asking questions o.k Not saying anything. With idiots also reading this, have to qualify myself la.

O.k He, Badawi say "You have to vote for our future..our children." And then he as that question about chaos and instability.

So I presume only eh, he is saying to vote for future you got to vote the racist BN. So chaos will be caused if "opposition" win.

But you see when result come out eh..the winner is the government what. so surely the winner will not cause chaos and instability. They want peace, security and prosperity also. In fact winner will be busy celebrating and forming new government and going on about the business of government.

And the loser, BN, which is now the opposition, got 50 years to learn from the previous "opposition" as to how to conduct themselves when they lose.

Is Badawi saying, that if they lose, because they are bad losers, they will cause chaos and instability?

Hey, now I understand why they keep Kamunting and ISA, maybe because they know one day they need it too for temporary residence!!!

All this very confusing man!