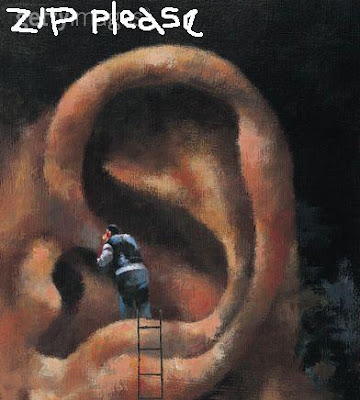 SUDDENLY some of us have been awakened and want to decide who should be Menteri Besars. News starts flying around that it should go to this guy or that guy. You have voted your man in. You did well. Just be happy your candidate won. Now don't climb into any high horse and say that your man should be the Menteri Besar. Worse still, like in Perak, if you are Chinese and the DAP won the most seats, you have missed the mission of the Barisan Rakyat by miles if you think that a Chinese DAP should be the MB. You still live in the Dark Ages. This is not a popularity race? The State Constitution says it will be for a Malay Muslim, but the Sultan can waive that. Leave it to the Sultan and I have no doubt about the integrity of this revered personage.

Last night I received a deluge of sms asking if there was a riot in KL. Man, I am down with some viral fever but I had to prove these fear-mongering idjeets wrong by venturing into town and inviting them to meet me for drinks at the Press Club. Guess they believed their friends more than me. they must have bunkered their homestead with more mattresses. Anyway, I saved some money.

So, some of you out there, just shut up and keep your mongering thoughts to yourself. Leave it to the Barisan Rakyat parties to work things out and dont allow the spin doctors in the Star and NST to cow you into believing that Dooms Day is approaching.

Need a few splashes with my buddies at the PJ Club now.

People stay calm.....bright days are ahead....think positive! think goodness! There are still hordes of sane-thinking Malaysians amongst us.....the rats have gone into their holes with their inherent stench....the air is definitely cleaner. think BIG people.....look out for each other.

for something serious...
that dap limks is f**ked
boycotting the swearing in of the perak MB?

Lim is more about his party and ego (JUST LIKE THE UMNO/BN) boys than about Malaysia and MALAYSIANS!

Man! I am pissed off with his juvenile and infantile stance!

EVERY blogger on MT and even his own blogsite is now slamming him for this stance....

and history has proven that not everyone can be wrong all the time..so I PRAY the egoistical beast in DAP will give way to some grace!

Like it or not, the Sultan has chosen, and in this case Raja Naz -our fav Royalty !!

So long as the PAS guy is a good MAN that is what the people are accepting....

WHY did they submit 3 names if they didn't want the PAS guy?

And does this NOT create ill will within the coalition of BR when this happens!

Zorro...KICK THE BUTT OF DAP FOR ME PLEASE!!!

Wondering why is our dear PM uttering words that would incide racial hatred? Making big statements about Penang abolishing NEP and blah blah....

If it was the other way around, I guess the guy would have been put under ISA? Just like the unfortunate HINDRAF 5?

I cannot log in to post at Kit Siang's blog so I'm gonna ask you here to air my view..

Please pass the news to LKS that I did not vote anti govt for you guys to boycott the swearing in of the Perak MB.

Are they blind & deaf!!! I don't give a damn if the PAS or DAP or PKY man gets to be MB. I don't care for the MB's color or faith. Let him do his job. If he fails, then get him out. We fought for meritocracy, remember??!!!

Accept it dammit. And don't you blow it. And where is Jeff & his take on this.

I am mad as hell over this.

AYE, AYE TO THAT.

THE PROPENSITY FOR HUMAN STUPIDITY KNOWS NO BOUNDS.

COS SOME PEOPLE JUST REFUSE TO LEARN.

Thanks to DAP and their untimely arrogance, we might as well forget about having a prosperous and peaceful coalition among the oppositions. :-(

I'm thinking positive but I hope the newly became (is the English correct?) powerful YBs have not started to behave like their 50 year old not so powerful anymore predecessors.

I sincerely hope that reports of some newly minted YBs boycotting the swearing in ceremony of the BR's new MB in Perak is not true. If it is, then they are not fit to represent us Rakyats. Might as well give the MB's post to the largest party in the Assembly, BN.

Yes brother, I feel that what is put down by you above should be taken and accepted. If what has been put up in Lim Kit Siang's is true, I guess our feeling "syuk" is only for the past few days. What are all those involved in the squabbling trying to prove?

I am a Chinese and I agree that Perak's MB should be a Malay. What is wrong with having a Malay being a MB working along with Malay, Chinese and Indian? We are all Malaysians and if the malay knows Istiadat Istana better than the Chinese, let the malay be the MB lah. While we want change, it is better to change in slower pace rather than risk a situation of resentment.

wish uncle kit is as wise as you...

“Compare society to a boat. Her progress through the water will not depend upon the exertion of her crew, but upon the exertion devoted to propelling her. This will be lessened by any expenditure of force in fighting among themselves, or in pulling in different directions.”

YES, can you please tell that to LKS!!! Suddenly after DAP said that it will respect the Sultan's decision, LKS announce to the whole world that he objects to a PAS CM, and wanna boycott ceremony. This is suicide for BR.

It is so frustrated to hear all these bickering. Sometimes I just wonder if the main purpose to stand in the election is for the sake to upheld the right or merely want fame and money.

The Perak MB is turning into a circus. Kit seems to have forgotten that he got this far because the people are united regardless of race or religion. Now he's boycotting the MB swear-in and disrepecting the Sultan. I can hear the BN laughing their heads off now, proving a point that DAP-PAS-PKR can't even get to form a government properly, much less run it.

Media Statement by Lim Kit Siang in Petaling Jaya on Wednesday, 12th March 2008:
DAP CEC has given approval for the formation of a Perak coalition government headed by DAP or PKR but not by PAS – DAP Perak SAs to stay away from swearing-in ceremony

The decision to appoint a PAS Assemblyman Mohamad Nizar Jamaludin as Perak Mentri Besar has caused shock and consternation to DAP leaders, members and supporters.

The DAP Central Executive Committee, at its emergency meeting in Penang on Sunday, 9th March 2008, had given approval for the formation of a Perak coalition government comprising 18 DAP Assembly members, seven PKR Assemblymen and six PAS Assemblymen.

As the appointment of PAS Assemblyman for Pasir Panjang Mohamad Nizar Jamaludin as Perak Mentri Besar representing the third and smallest political party in the proposed coalition has not received the mandate of the CEC, DAP Perak Assemblymen will stay away from the swearing-in ceremony for Perak Mentri Besar scheduled tomorrow.


The dust have barely settle after all the exitement over the weekend and now we get a load of this.

C'mon the road ahead is a diffucult one. We could do with more compromise and less squabble over who should be the next MB of Perak. It just the MB position, we have not even come to appointments of local councillors yet. If we cannot get pass this then that would definitely be hell. Might as well pack it up and give it back to them. Remember - the RAKYAT is watching. Let's accept the decision of the HRH the Sultan and move on. The are bigger challenge ahead.

C'mon DAP - get pass this and move on. Every action, every word that is uttered is closely watch by the RAKYAT. Don't fall for thcheap trick from BN and quibble over this.

REMEMBER - TO THE VICTORS GOES THE RESPONSIBILITY. WE HAVE WAITED MANY YEAR FOR THIS. DON'T LET US DOWN. FAILURE IS NOT AN OPTION HERE, FOR CHANCES LIKE THIS DON'T COME OFTEN.

The fish head starts to rot.... Barisan Rakyat is cracking, just after 3 days???? I pray common sense and goodwill will prevail. The rakyat will be the ones who suffers now.

This is only the begining of a long process. If we cannot get through this then might as well pack it up and give the MB back to BN.

DON'T DISSAPOINT THE RAKYAT. WHAT THEY GIVE, THEY CAN ALSO EASILY TAKE AWAY.

WIND OF CHANGE HAD HIT MALAYSIA,

YOU CALLED IT POLITICAL TSUNAMI.

SO YOU MUST CHANGE TOO.

WE CHANGED FOR MALAYSIA.

NOW YOU CHANGE FOR MALAYSIA.

Pls Mr LKS, we expect you to be wiser than this(to boycott the sultan's decision)In life, we must nvr think we deserve this and that (esp. the good things)Where we can compromise (esp our ego)for the greater good of the Rakyat who voted in true muhibbah spirit, please don't go spoil it. I do hope all elected Perak DAP YB's will have the guts to go against you tmr(if you have not retracted your orders)and go attend the swearing in ceremony of the MB of Perak.

WIND OF CHANGE HAD HIT MALAYSIA,

YOU CALLED IT POLITICAL TSUNAMI.

SO YOU MUST CHANGE TOO.

WE CHANGED FOR MALAYSIA.

CHANGE FOR AND THE FUTURE GENERATIONS

NOW YOU CHANGE FOR MALAYSIA.

"Worse still, like in Perak, if you are Chinese and the DAP won the most seats, you have missed the mission of the Barisan Rakyat by miles if you think that a Chinese DAP should be the MB."....

FUCK YOU LAH.. MELAYU UMNO WON MOST SEAT.. THATS THE REAL FACT.. OK? GOT IT?

Hello Mr Blog. Don't use four inappropriate letter words on Kit Siang. He is our hero and should be supported to professionally manage the political journey of Malaysian in his own right. He is our Malaysian Knight in shining armour. Lets ride along with him.