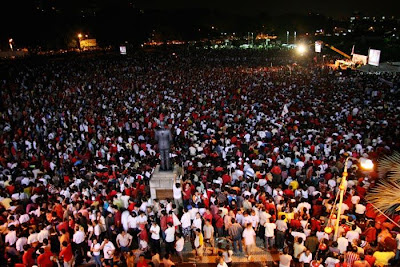 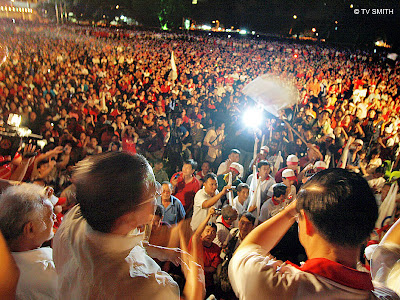 That was Penang last night. That was the DAP's wrap-up- wear-red rally at the Han Chiang Stadium. It is not important how many were there. It was important that an unexpectedly huge crowd was there. It was heartening to know that a 15 minutes rainfall did not deter them from the rally. It was encouraging to see that these are the people posturing for change and clamouring: ENOUGH IS ENOUGH.

OUR JEFF GETS TOP BILLING

But our blogger, Jeff Ooi earned my respect. I have not been to any of his ceramahs in these last 10 days. I had been wondering how Jeff is going to blend into Jelutong which are mostly the lower income people. In fact, as one blogger to another, I do feel worried how is he going to communicate with them. Previously, Karpal Singh was known as the Tiger of Jelutong and it is not easy to live up to Karpal Singh’s charisma and aura.

But our dear Jeff Ooi which every bloggers know, rocks them! The announcement was made in Mandarin and Hokkien (the more articulate one which I have difficulty understanding) and people were already excited about it. The women around me told each other excitedly, “wah, ee holiao lor”. I was expecting some veteran guy or even Karpal Singh. It turns out they are talking about Jeff Ooi!

When it was Jeff, I suddenly feel proud that we have a blogger there. The mention of the blogger make me feel like shouting, “I am a blogger too!” He has lost his voice but he belted out three songs with his guitar. Fuyoh, I didn’t know that Jeff can sing so well! The crowd sang along with him too. I got the video of the whole session and hope to upload it when my line is ok.

TONIGHT IN SELANGOR WE WILL SIMULATE

WEAR RED TO MAKE THIS STATEMENT:

TOMORROW WE WILL SEIZE THE DAY!

TOMORROW WE TAKE BACK OUR COUNTRY FOR OUR PEOPLE AND FOR OUR CHILDREN!

MAKE AN EFFORT TO GO TO THESE CEREMAHS TO GIVE SUPPORT TO THE CANDIDATS:

I am voting for change as I want a future for my new born son.

22 yrs mahathir have every opportunity to unite m'sians but he choose otherwise.

and badawi have the mandate to do it but he encourage his umno youth to instil fears on his fellows m'sians.

immaterial of the outcome after 8/3, it shows only we the rakyat, thru barisan rakyat could unite ourselves for a better future... by all m'sians & for all m'sians.

no wonder DAP dont need malay voters,they have mass support from chinese.
there is no end for racial politics in our country.

Looking at the photo above and the one in the STAR yesterday on BN Bodowi's attended ceramah in Penang, it is not difficult to tell how huge YB Lim and DAP's ceramah was compared to BN's.... in BN's case, the chairs were at least 1 metre apart with plenty of elbow room between adjacent chair. For DAP's ceramah, it was literally shoulder to shoulder standing room only. I should know because I was at SS2 ceramah; I was unable to find a good place to stand, let alone sit! Good luck Malaysia, Vote with Your Head, Not with Your Heart. BN is going to hell this time and hopefully the new government could haul up these corrupted cronies and little Napoleons up to face justice!
bodohland.wordpress.com

My dear anon 12.53
DAP is champioing Malaysia for Malaysians, if you did not know that already. Barisan has proven itself to be racist. Gerakan even called for Chinese to vote chinese. But DAP stands tall in saying they want to represent all. A fair Malaysia for all Malaysians! So, don't judge them yet! Judge if you must, those who did not bring change for the past 50 years!!

People say, the country will be in chaos if UMNO loses... so vote BN. People says, we need a strong government, so vote BN. Now I ask u, does BN need to hve 92% control of the parlimen? Does BN need 100% fo the dewan? Every election, the EC helps the BN to make the fight that much harder. Maybe 2008 we can still sthg thru the electoral process... don wait until the country deteriorates to the likes of myanmar, cambodia or philipines. PPl of those nations resort to people power uprising, bcuz the electoral process is compeletely unreliable. If we don act now, it may be too late....

BNs'strongest call has been that they have managed to grow the Economy. Is that true?

In the last 4 years of BN's reign our economy is purported to have grown at about 6% (it's hard to get info as our figures are always conflicting). . Oil as a percentage of our GDP is approx 8% (again an estimate as actual figures are under the OSA- Go figure, our National resources are an Official Secret). Oil in the period of Badawi's tenure has gone up by about 400% (without taking into consideration that Malaysian crude oil is one of the 'sweetest' crudes around with an extremely low sulphur content and high petrol yields). Another resource, palm oil, over the same period has seen a 250% increase in prices!

In real terms, without our natural resources, our economy has probably shrunk by as much as 5-7% maybe more

Singapores economy over the same period has averaged 7.3% growth and this growth is based on their manufacturing, services and delivery systems as they have no natural resources.

The above is my own dissertation and I stress it is with what little info the Government releases our way. My estimates for our oil and palm oil production for example are gleaned from the CIA World Fact Book, The International Energy Agency and other sources.

Another interesting fact (to add insult to injury) is that under BNs' reign over the last 4 years we have stepped up oil production by approx 6% from 750,000 barrels per day to 790,000 bpd, an obvious attempt to extract maximum revenue. But so irresponsible given the fact that Malaysia is running out of oil....