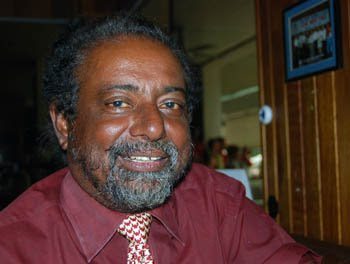 Allow me to digress a bit from the Election Campaign to send a message to a buddy of mine. there has been a lot of stories, gossips going around that Nades may be lured back to the Malay Mail. Since the take-over of the Paper that Cares, I ,( who had abandoned MM after the unceremonious exit of Rocky,) thought I would maybe support the "new". I even commended the editorial team in one of my postings when they broke the story of the child-porn MAS pilot-peddler. MM ran the story for a while .I published a photo of the alleged peddler but did not see MM pick up anything. I stopped buying MM because I believed pressure was exerted. However, yesterday and todays offerings convinced me that it is another BN paper. Today's page 8 gave a token mention to an opposition MP whilst page 13 sealed the fate of MM where I am concerned. No it has not sunk into gutter journalism yet but.........Sorry Yushaimi, Yusri (of course we can still remain Press Club mates). Sorry too Tony Francis, a journalist I still will hold the torch to (if you change the direction of this paper).

So Nades, change your compass setting or whatever sexton you prefer. The Malay Mail is not for you. I have known Nades since the early 70s. The one thing that stands out in Nades is PASSION. It runs in every fibre, every muscle, every nerve......PASSION flows from the bloodstream. I ain't no preacher although on the eve of your major heart by-pass operation you asked me to stop being a motivator. I can't help it Nades. It is my passion too. To you Nades I dedicate this Rod Stewart classic that has never failed to inspire and motivate me in my doldrum periods.

Before you pass judgement to the MM, you have to realise the new owners have yet to take over the paper.

I suggest you give them the benefit of the doubt.

If you know Tony Francis well, then he might be able to do something to help resuscitate the paper.

He comes with great credentials, Zorro.

If Nades were to come on board, with Terence Fernandez thrown in as a package deal, it's double trouble for all wrongdoers out there, Zorro.

They are proven to be hard-hitting writers and don't you think they would be able to give the paper a different dimension?

Give the paper a chance, Zorro. Let's see what happens after Tony Francis is given the full rein, shall we?

Give Tony Francis a chance!

He's what you call a turnaround specialist, okay...

Hi Loneranger, hiho Silver!
Sure we will wait for TF to take full
control of MM. In whatever capacity, I just hope (and I am sure, you too
hopes) that full empowerment be given to Tony to do what he does best. I did say in my post that he is one guy I will still hold the torch to. I am generous with slack when it comes to people I respect and admire. I went back to reading MM after I heard that Tony Francis and Shivadas were an in-coming team, and that the 'terrible-twins' (read Nades and Terrence) would come on board too. (See my February 13 posting)
But Loneranger, I cannot see the possibility of Tony Francis or his team given, to quote you, "full rein". The demonic word CONTROL is the holy grail in journalism and I do not doubt that the owners will keep that close to their chest. I was told that one reason NST allowed the sale was on condition that the new owners do not include Ahiruddin Attan in any capacity in their plans for the paper!

EX-MM: I hear you loud and clear. I am glad that this posting was able to generate good thoughts about the new team. Meantime, I wait with bated breath....honestly I will.

Let's see now.
First : MM would do well to have Nades on board. But Nades would be disillusioned in MM EVEN under the new owners who comprise equal part representing the very same people on NST's baord. Which means if he chooses to take up the offer, he's got to know which way the water flows. And if he's ok with that flow, he's not gonna be the same Nades of the Sun.

And the new MM will have Shivadas and Tony Francis. these are professionals but they are not about to shake anything or make anything happen. The bosses say this, they'll do this. But one thing I do know, they have pride and passion and integrity. That's a plus for the MM, more than I can say for the NST.
In fact, the Malay Mail will be better than the NST now, in terms of plain news coverage and play-up. Of course nowhere near the bravado of the MM under Rocky. But then, look what happened to him...

Shiv and Tony are not known to have that daring-do to push the parameters.

Tony was a great sports editor. Later he was made chief news editor of NST. Very experienced newspaper man. Nice guy but not the sort to make waves.
Then again, there's nothing more that the MM meeds at this point.

All in all....Malay Mail will be better than if it remains under the inexperienced Yushaimi.

They say a leopard cannot change its spots. MM was, and is, an organisation run by Umno monkeys. Whatever changes will only be token. Dont expect MM to become the vanguard of our fight against corruption, lies, stupidity. Tony Francis and company can only do so much. At the end of the day, the masters, that is Umno, will call the shots. That means it will be back to status quo. That means MM will still be a mouthpiece of this shit called Umno. So I call on wooly-headed realists to stop dreaming about a free Press. It can never happen, and will never happen, unless the voters say so. Zorro is right. How many chances are we going to give to MM and its ilk.

Zorro,
You are too passionate and will not pretend in that "semuanya ok" stuff ...if it is not!
Of course the powers-to-be will try the "break the bronco" stuff and if Nades or Tony and Co. breaks then you will have to go back to the drawing-board to access the calibre of Nades and co.It could be disappointing for you to face reality BUT you must know who's paying for the food in the Nades and Cos. households...and remember every man has a price and can compromise !
I hope I am dead wrong Zorro, but though the 4 names mentioned are good journalists don't let their weaknesses (if any) stop your PASSION for searching and exposing the truth!!

To Nades, Terrence, Tony F and Shivadas I say...please reassure this old teacher, Zorro, that you still have your dignity and ethics in professional journalism !
Cheers !

We are all aware of the journalistic prowess of Nades,Tony & the others u mentioned.

Should he take up the offer, he will definitely try to be a change agent...nothwithstanding this at the onset they will give him boundaries..can Nades work within it?

When push comes to shove in uncovering the shit & piss of BN Nades expertise will be curtailed...and his dissatisfaction and disaffection will show....

But Nades needs to live....who is going to put roof over his head & food on the table...Compromise his ideals that's what will occur ..

Too many good words about Nades everywhere. But he messed up endorsing Lee Wah Beng. Right, I accept, he will make a wonderful Municipal Council Officer. He will get the roads tarred and the drains unclogged. But is that what you are supposed to do as a State Assemblyman?

He is supposed to be working in the State Assembly debating and making laws and policies. The job on the street is for Municipal Council people who are paid for by the assessments that we pay.

So, basically, Nades, what the hell was the basiss of your bloody endorsement of Lee Wah Beng anyway? Need to get or keep a job with MSM? Then say so la!

Shiv as one of those in the team to revive MM??
Yes, sir, yes sir three bags full!

Both in the personal and career levels, he knows where his bread is being buttered.

Ask only honest, humble and hardworking ex-MM & NST journalists and they will give you the right picture of bah. bah blacksheep. Have you any wool..left, shiv?

my goodness,what a shock i get! anyway i wish u well, my dear Nades.i used to write anonymous letters to u & sometimes i knew u had accepted my suggestions in good faith.and my last letter to u saying i was a bit exhausted too and i hoped i would not be writing to u again.i know u r a good man, keep up ur good reputation wherever u may be.God bless!

Nades knows better what evil is happening in MM today.

And Tony Francis is doing a GREAT job flushing the paper down the toilet.

Circulation is only 17k! That's RM17k per month!

Shiv is speechless and clueless during meetings. Yushaimi Yahya tells the staff and the whole wide world he's a nobody despite being the 'editor'.

Frankie and Bill don't see eye to eye anymore. In fact they don't even go for dinners and drinking sessions together anymore.

And Umar..oh well...he's going backwards instead of forward. It's high time for him to retire and babysit Francis Nantha who might just see more stars then when he knocked himself into the pillar.

And to top it all, Ibrahim has no idea what is going on and believes Tony Francie 100%.

So Nades, don't bother wasting your time with a group of people who can't even earn the command and respect of each other and the staff.

p/s: Staff tell people like Frankie and Tony F to F'*( Off on their face la...its that bad.