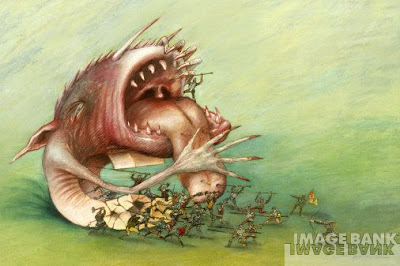 sorry to digress. cant help it. another innocent 18 year old kid died after national service. its more like national mortuary.
and the shithead of national service lee doesnt even show his face for the funeral. he sent a representative, a former assemblyman of temiang to be there to try explaining that the death has nothing to do with national service.
when are these shitheads gonna stop playing with our children's life? my kid is now 12 years and i dont her to be there for a russain roulette program.
Zorro, do the innocent children a favour. blog this issue until they respond. and if we need a rally to stop all these deaths, i will volunteer my time. and to tell the shithead lee that ENOUGH IS ENOUGH.

mark our words , the MSM will change its colors soon enough to stay alive ( like a chameleon )
for dun you think they dunno about the winds of change ?

Anak Malaysia: Thanks for your comment. My abrasive comment on LKS was made because the facts were quite straight-forward. And moreover I voted opposition. I dont take pot-shots if I do not get the true story. If you have all the facts how about sharing?

I wrote to the Editor of Malaysiakini?Now this is news! I have never written to the editor of Malaysiakini....maybe you read my blog that Malaysiakini whenever it is worthy, post under their Top Blogs category. Now you are not telling me that somdebody impersonated me? Can or not email me that Letter that you said I wrote. I might have to check the IP of the writer. and dont forget, if you have facts about Trengganu, share ok?

Yok Hoong....I have begun some enquiries on this and will work on this. Yes it is serious. How many deaths now?

anak malaysia has a strong point there about restraint !
We agree 99% and always believe in the overall clear and present view as for eg how Anwar was vilified eons ago now becoming everybody's fav man to watch or as they say the rising superSTAR ( holy shit ! )

really lost count but my guess is that there are more than 15 victims by now. Someone has the real figure?
zorro, we must stop this russian roulette program. they are hiding behind national integration to squeeze excessive rents and leave the innocent children at the mercy of fate. i repeat, ENOUGH IS ENOUGH. There is one death too many already. And that chairman Lee must be held accountable for all the deaths.

"My experience of the working press," he says, "is that they are a very degenerate group. There is a terrible incidence of alcoholism and drug abuse. The mental stability of large elements of the press is more open to question than that of many other comparable groups in society. A number of them are ignorant, lazy, opiniated, intellectually dishonest, and inadequately supervised."

"The individual journalist, if he has any panache or talent, becomes something of a celebrity. Much of his social life is built up on the press-circuit: bars, hangers-on, media groupies, the stifling and depraved gossip of the degenerate little media community, and the fawning of unfulfilled women, boys, and hucksters.... Journalism tends to attract the sort of person who settles whimsically on it as a calling or comes to it after disappointments elsewhere, because of the relative ease of entry into the field. These people, discouraged and purposeless are easily influenced by their angrier colleagues. It is by inadvertence, inexperience, the investigative nature of the press, the antithetical role of the employee, and the negligence of the employer, and not by any organized subversion, that the press veered away from being a mirror to society, and became a perverse sort of irregular and often disloyal opposition."

Anon12:58
Brother, I do not agree with everything that Conrad Black has penned, especially his opening paragraph. I still keep the company of Journalists who are best-in-class and yet have no compunction in sharing a couple of "setengahs" with me. Journalist do not keep regular hours per se and as such they do gravitate around hot-spot watering holes. You cannot imagine the number of scoops that originated from Colleseum Bar, Kum Leng restaurant, Old Town Sun Wah Bar and Jalan Gasing's Rennie's
Pub and later the National Press club. These were the places that I, an ordinary school teacher, got into "bad company" like Musa Scully, the late David Tambayah,Norman Siebel, Ben "16 tons" Cuenha, Maurice Khoo, the late Felix Abishegnathan, and a few others that distance and absence do not allow me to name. They all drank and the spirits flowed as blood through their the pens on paper or from their fingettips as they pounded their Royals and Remingtons. anon....you just inspired me....I will put up a posting on this. I DO NOT WISH FOR THE DEMISE OF THE MSM...I WANT THEM TO BE CURED OF THIS CANCER THAT IS EATING AT THEM.

Today, as requested thru email, I deleted comments by a reader. I tried to persuade him that no adverse comments resulted. He insisted that his comments be deleted. I have to accede to his wishes.