DANG! ARE WE MALAYSIANS FIRST OR RACE FIRST? 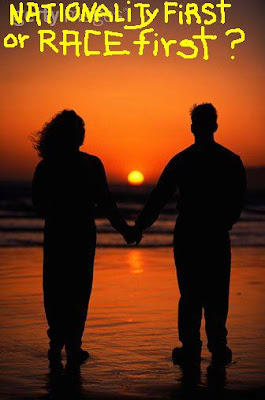 There we go again. The Selangor State Ex-Co has not even sat to chart our future and we have a bunch of people protesting that the racial composition is not right. Come on people, when are we going to rub off this scepter of race first before nationality. It is difficult after 50 years? Can we at least take little baby step towards being Bangsa Malaysia and not Malaysian Malays, Malaysian Chinese and Malaysian Indians, Malaysian Kadazan, Ibans, Dayaks etc....

I challenge UMNO, the largest political party to show us the way! Is UMNO up to it? Could this be the redeeming factor that could win back credibility that UMNO so badly needs.

In this context, I always like to relate the story my friend the former Director of the Science Centre, Jayanath Appudurai related about one of his trips to London: Three of us were having coffee on the sidewalk and an old Englishman asked to join us. He was a planter in the sixties and he asked: You three must be Malaysians! Nowhere but in Malaysia can you find people of different races enjoy each other's company over drinks. That says a lot about us, huh? Those of us who traveled and when asked we proudly say : WE ARE MALAYSIANS! Do we proudly exclaim this when a foreign tourist ask us this question back home here in Malaysia? Think about it? Let's do something about this. Baby steps OK?

Note: People's Parliament will be convening the follow-up Anak Bangsa Malaysia get-together in three weeks time at BLOGHOUSE. Keep connected for this event.

Zorro, I fully agreed with you. Malaysian first

As long as a party known as UMNO with its "ketuanan Melayu" or supremacy of Malays ideology still exists in Malaysia, Zorro, your dream of an utopian Malaysia will remains just that, a dream. For our dreams to materialise, we just have to annihilate this "divide and rule" party from planet Earth in the next election. We have proven we can do so collectively in the recent PRU12, coming together as true Malaysians and denied them the 2/3 majority, so why not a total annihilation for a true Bangsa Malaysia?? Deny them not even a single seat in Parliament is not a pipe dream if we really, really come together again!

Being overseas, I find that it is EXACTLY like how you said it to be, I proudly tell people that I'm Malaysian. And as someone I know said to me, the same thing doesn't happen when you're in Malaysia.

Before we can become a multi-racial country, we must FIRST become one country. We must first become proud Malaysians, before we can go any further.

>>>>
You three must be Malaysians! Nowhere but in Malaysia can you find people of different races enjoy each other's company over drinks.
<<<<<<<<


don't be naive. Malaysia is not the only 'multicultural' country in the world. infact i can't remember seeing 3 people of differing racial backgrounds having a drink in malaysia except in the schoold days of 60s or 70s.

There are many people like you and me regard ourselves as Malaysian. We are really tired with the race based politics played by Umno and its machais. Even up to now, Tengku Razaleigh is still very much a racist. Just go read his letter to Umno members in Rocky Bru and you know what I meant. So, even if Tengku Razaleigh can return to Umno main stream politics, he would not be much help to improve Umno. There are many Malay brothers and sisters are much much better than this guy.

Sang Keladai: This is a remark by an expat planter who might be recalling his good old days in Malaysia of the 60s. Yes I agree with you on how we mixed pre 69 but then I observed that the polarisation began in the early 70s. Its a pity. Australia is definitely more multi-cultural but it ends there. An uncle of mine got PR in Melbourne.He came out of a video-rental outlet and from across the street a group of male and female students give him the two finger and yelled: Chink, go back to China. After consultation with his kids, he packed his bags and headed back to section 17, good ole PJ. Back home here you dont get our kids chorusing these remarks across the street....only some intellectually bankrupt UMNO politicians do that because that is the only growl they are familiar with.
But I still hope and will keep the faith, that maybe, not in my lifetime but that of my grand children.

'..reflect the racial composition..' Arrggh! Sickening piece of apologist verbiage for losers talk. Why not '.. reflect the best talent..' or '..reflect the most capable..'. You know what I mean. Yes, I mean
the M word - meritocracy. And in a multi-cultural society, the choice is for fair competition to select the best to represent us Malaysians irrespective of ethnic background. We want the best; not the mediocre, not the emotionally challenged, not the bigoted to run our country.

to me, there are only 2 races in Malaysia- 1. malaysian 2. umnoputra

Umnoputra race is not confined to malays only as we can see the likes of Patrick Badawi,Semi Value, the nangka busuk politicians, to name a few. And these few people are elected into the race, not born into it.

Keep in mind there are lots of them left.

So in order to preserve the one and only race, gotta eleminate the other one. With no favor

Can bloggers like you please organize more activities to promote unity and Bangsa Malaysia? Bloggers please make this your next agenda. Organize with Barisan Rakyat so that those that promote one particular race only will be made irrelevant.

We are all in the same boat competing with the world at large and yet we are dividing among ourselves based on race. While others are speeding ahead as one.

Malaysian must wake up and unite as One to speed ahead.