24 MARCH: A DATE WITH the STAR 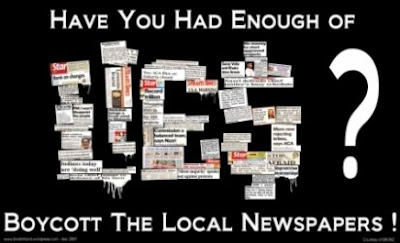 HARIS was to participate in in this coffee forum but since it coincided with Phase 2 of HartalMSM, it would be incongruous and bad taste for him to drink Wong's kopi. However, he promised to register me as part of the audience. Of course, we will wear our "dirty yellow T-Shirt for one anonymous commentator here:

Anonymous sent in this comment at 11.55am this morning :

After all of Haris’ vitriol on MSM, he would appear on The Star forum. What is he trying to tell us? Will he wear that silly t-shirt to the forum?

Politics is the art of the possible - Otto Von Bismarck (1867)

Anon at 5 minutes to noon here is some yellow literature for your personal consumption and intellectual growth, no less than from ADOI:

A REALITY CHECK ON SPIN OUTSPUN!

The mass media, as we know it, is under microscopic scrutiny post elections. And the ones who are holding up the big magnifying glasses are none other than advertisers themselves. For them, mass media is everything. And they don’t like what they are seeing.

Are billions of ringgit being spent on an indifferent audience?
As relentless as rain, spin had been the diet for Malaysians as long as I have been alive. But the tide is changing at the speed of light.

If mass media don’t get their content right soon enough, it could spell doom, and provide opportunity for newer players to replace them, quicker than they can think. Consumers are voting for their choice of media too. And they don’t care if myopic media monopolies keep focusing on the interests of the board, instead of the bored.

Even sms-es calling for the boycott of certain media have been circulating at reckless speed. This is the world of alternative media and marketers are watching the space. Blogs, interactive chat sites, mobile communities, all now have cult status - the devoted kind, not the stabby kind.

When infamous columnist Nadeswaran aka Citizen Nades got hauled up for a ‘telling off’ by the then Menteri Besar of Selangor, little was revealed about what Nades said in response. Perhaps, if the people knew, he would have been voted into the state government too.

His retort went something like “Nobody tells me what to do.”
So there you have it, the voice of the people has spoken.
Yet media masters distance themselves from the very man who can show them how one should talk to readers.
Will media habits change? Will SMS news alerts be more than adequate for the busy amongst us? Even if we signed up for 10 relevant alerts a day, it’s still cheaper than newspapers for a month.

Will a glance across the main pages of the papers do? Most of us read the papers with a built-in timer not to spend more than 7 minutes. Or what that 9? Is that a reasonable aperture for the ads in between the pages to actually work? And do we need three newspapers to tell us the same thing? Isn’t this like doing a Google search where you almost always read the first page only, and not the 133 subsequent ones that somehow match your query. I’m talking content here people. Nobody buys the papers to read ads.

Unless you’re a real estate agent or looking to sell your car. Content. Period. Get it wrong and you’re history.
Of course, the biggest charade surfaced post elections when readers and viewers watched with delight as some serious back-paddling of content by the main media took place. Again, another serious flaw was displayed: intellectualisation for its own sake. They’d gone from denial syndrome to senile syndrome, with chameleon slickness and shameless presumptions. A disaster recipe for surefire irrelevance.

Arrogant, self-serving content belongs to club newsletters, not in your daily state-of-the-nation update.
Spin is not a new jargonised expression I’m tossing around in this argument. Advertisers are the smartest when it comes to spin; they recognized that sloganeering was dead a long time ago.

Unilever Chairman for and Singapore Noel Lorenzana put t succinctly in a recent ADOI Conference when he noted the shift: “From Intrusion to Inclusion”. We in advertising have been talking about engagement for almost a decade.

Adding to that, Datuk Vincent Lee articulated in his recent newspaper column about marketers’ trend to spend more online, “As a hardcore ad man, I don’t think the ads that are at fault – it’s the media guys that have created the fallout. We know the old model of disruptive media will not hold on.”

He goes on to elaborate, “AOS (Advertising Overload Syndrome) is a bigger pain than George Bush is to the American voter,” citing a recent Adweek/JWT Report.

Does this mean mass media spend will go down? Have media specialists become irrelevant in this chaos? Will content (read creative) be the new messiah? More importantly, who will grow
the industry?
Who’s responsible for the new digital divide between brands and their consumers: Media or Creative? Isn’t it time for a gap analysis?

And finally, will advertisers dictate content to save the day?

I believe it was advertising great Bill Bernbach who once said, A little confession can get you a lot of compassion.”
Immortal words for our media capitalists!

the boycott will only work if we can achieve the numbers. In this respect, i would appreciate a link to my post on the same subject. I have already linked to yours as well as included you in my blogroll. See you at the usual. Cheers.

Did I read somewhere that the 5 BR states will be printing their own newspapers to counter the lies? No KDN necessary since it will be official govt gazettes. Looking forward to this.

If we are planning to make a difference, we need to Target the Bigger presses - the smaller ones will just fall in line. Aim for the STARs. They lose readership numbers, this will result is loss of advertisers - and... loss of SERIOUS revenue. Get those SMS-es going, the Time for Change is at hand