HANTU flew past and droppped this piece into the letter box with a note: Happy Easter, see u at the star Forum on Monday. 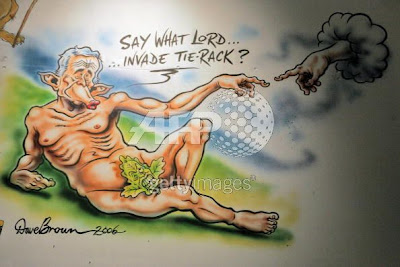 I have never given up on the resourcefulness of man. Always an optimist, I always give the benefit of the doubt to innovative shifts. Of course, this idea came too late for George Bush but I was wondering if Pak Lah could outsource the Ministry of Rural and Regional Development because this guy just doesn't have it. HE SWORE HE DOES NOT UNDERSTAND ENGLISH. This choice illustrates the paucity of choice in the BN, or like someone said, his name got drawn in Pak Lah's lucky draw.but we have to accept MMT....the luck of the draw must be honored. It was also said that after Pak Lah made the best choice of including Zaid Ibrahim he found choosing the others a chore....thus all names were put into the box and the viola, the new cabinet. The 4th floor boys witnessed the draw and when MMT's name was drawn, an uproar ensued but soon quelled by this opener: Hey, guys....now that Zak is no more, we need someone with similar nefarious trait....build more mansions.....rural and regional development mah!

Here is Hantu's offerings. Can this be applied here for non-performers after three months?

-- Congress today announced that the office of President of the will be outsourced to as of . The move is being made in order to save the President's $500,000 yearly salary, and also a record $521 billion in deficit expenditures and related overhead that his office has incurred during the last 7 years. It is anticipated that $231 billion can be saved to the end of the President's term. "We believe this is a wise financial move. The cost savings are huge," stated Congressman Thomas Reynolds (R-WA). "We cannot remain competitive on the world stage with the current level of cash outlay," Reynolds noted.

Mr. Bush was informed by e-mail this morning of his termination. Preparations for the job move have been underway for some time.

Gurvinder Bob Singh of Indus Teleservices, will assume the office of President as of . Mr. Singh was born in the while his Indian parents were vacationing at , thus making him eligible for the position. He will receive a salary of $320 (USD) a month, but no health coverage or other benefits.

It is believed that Mr. Singh will be able to handle his job responsibilities without a support staff. Due to the time difference between the and , he will be working primarily at night. "Working nights will allow me to keep my day job at the Dell Computer call center," stated Mr. Singh in an exclusive interview. "I am excited about this position. I always hoped I would be President of Dell..and now of "

A Congressional spokesperson noted that while Mr. Singh may not be fully aware of all the issues involved in the office of President, this should not be a problem as President Bush had never been familiar with the issues either.

Mr. Singh will rely upon a script tree that will enable him to respond effectively to most topics of concern. Using these canned responses, he can address common concerns without having to understand the underlying issue at all. "We know these scripting tools work," stated the spokesperson. "President Bush has used them successfully for years, with the result that some people actually thought he knew what he was talking about."

Bush will receive health coverage, expenses, and salary until his final day of employment. Following a two-week waiting period, he will be eligible for $140 a week unemployment for 26 weeks. Unfortunately he will not be eligible for Medicaid, as his unemployment benefits will exceed the allowed limit.

Mr. Bush has been provided with the outplacement services of Manpower, Inc. to help him write a resume and prepare for his upcoming job transition. According to Manpower, Mr. Bush may have difficulties in securing a new position due to a lack of any successful work experience during his lifetime. A greeter position at Wal-Mart was suggested due to Bush's extensive experience at shaking hands, as well as his special smile.

And Mr Singh doesn't even need to know the language!!!

Ditto for the double Mohammad.

There's a lesson for all of us there somewhere.

I believe we have lots of people born here now resident in Singapore and other places who have the capability. Their salary expectations may be high but incidental expenses would be a lot lower.

The real Hantu say the choice is wrong.Mohammad son of Mohammad is an urbanised Malay who knows f... all about life in the kampongs so how could he be a good minister of rural development.