THE HIGHER YOU ARE, THE HARDER YOUR FALL....BUT ONE KICKED THE BUCKET BEFORE HE FELL. 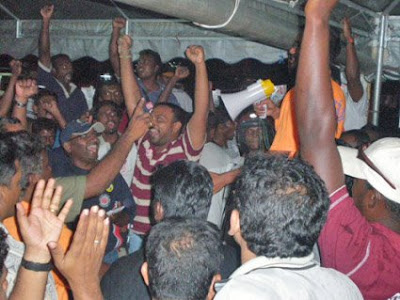 HANTU came in with this news but I could not tell him that I also received this bit about two hours earlier through email. I can understand the mood Hantu is in since Saturday night.....he threw temperance out of the window. Probably he just got over his hangover!

I publish this in its entirety and fondly dedicate this to the HINDRAF 5 who are still held under the ISA:

So Jeyakumar Devaraj has finally triumphed over S Samy Vellu. When I spoke to him this morning, he sounded tired but happy. It had been a long, long struggle.
'I think the victory was largely due to the nationwide swing to the opposition,' he said, modestly.
I told him that that alone would not have been enough to unseat Samy Vellu, who once famously defeated the DAP titan P Patto in an epic battle. 'It was your dedication, commitment to the cause and perseverance on behalf of the people over the years that saw you through,' I said. 'I think that shone through, making it impossible for the people of Sg Siput to ignore you.
'Plus you had an incredible team of supporters who gave their all in campaigning for you.' He couldn't argue with that. 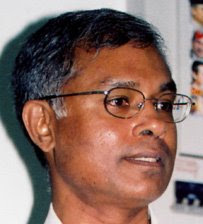 In one corner, you had Kumar, the soft-spoken respiratory physician who has sacrificed so much for the grassroots and marginalised communities. Even the MMA recognised his commitment to society and awarded him a gold medal for community service many years ago. That quiet front belies a steely determination and passion for empowering the poor. 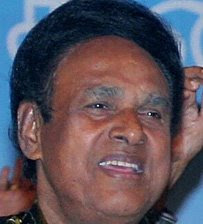 In the other corner, you had the flamboyant and eloquent Samy Vellu, the powerful MIC supremo, for whom funding for infrastructure projects was no problem.
The former represented a multi-ethnic approach to politics, someone who sharply critiqued the way the capitalist class were marginalising workers and other grassroots communities. Kumar, along with economist Charles Santiago, the new MP for Klang, will be a tremendous asset in Parliament in checking the trend towards neo-liberal economic policies while highlighting the huge gap between the rich and the poor of all ethnic groups.
The latter was an integral part of the entrenched race-based system of politics, a keen supporter of the capitalist class and whose ministry was responsible for awarding multi-million ringgit privatisation projects that generated huge profits for this class. Not to forget the Maika scandal that dogged his every step for years - until the Hindraf protests exploded into a cacophony of boos and jeers that greeted him wherever he ventured outside Sg Siput. It was in Penang - ground zero of the political quake - that the jeers were first heard in the Penang International Sports Arena.

IT WAS WITH SUCH ARROGANCE AND IMPUNITY THAT BN ADVERTISED THEIR FALSEHOODS AND PROMISES IN THE NST, STAR, AND SUN.

WHO IS HAVING THE LAST LAUGH NOW.

HOW MANY TIMES MUST I SAY IT IN THIS BLOG:

IF THE BN AND THEIR RUNNING DOG PRESSES DON'T REALISE THIS NOW, THEY NEVER WILL.

IN THAT CASE YOU JUST WALLOW IN YOUR OWN VOMIT!


THIS OF COURSE IS A JUST REMINDER TO THE NEW POWERS.

Have you seen Aljazeera's coverage on the recent election?

Man, it's damn good! If Barisan Nasional didn't learn anything from it, I really don't know what else to say.

from the title, thought you were referring to the satay-man-castle-builder-pseudo-michael-jackson who croaked this morning....