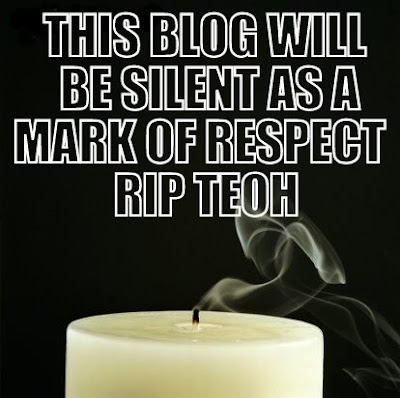 How to rest in peace?

On hindsight and looking at your Blog , you might have strongly declared your gallant mission to help Malaysia as a loyal citizen though your loose energy is sometimes misdrected and clouded by strong doses of reckless bravado which distract you from your stated objective , which is for a better Malaysia. Just look at your right bar with your inconsequential and out of touch banners on this and that. Think !
Have they changed anything ? Its getting worse !

Recap , re-visualise and strike the nail on the head not like a loose canon ! You have the spirit except the ritual might be off key , most times . But keep it up ! tune it

this is so frustrating and enraging to see our government having the less concern and care on this issue. as if it is just a death of an animal.

for goodness sake, he was found dead in the government building after he was taken in!!!
the whole government should be responsible for it. and this should be their foremost prime task to find out the truth immediate to return a good name to the government!!!

May your soul blessed this country, peace and justice would come forward upon your sacrified.

While your Blog's silence is in place, rest assured the whole Nation is speaking out LOUD and CLEAR to the present Government in ONE COMMON SINGLE VOICE We do not accept Teoh's death in such circumstances on any account whatsoever. This tragic incident shall leave an inedilible mark on our minds on all conscious-thinking Malaysians. Not on partisan line by reason of party politics, race or religion. But as any honest decent human person would.
To our own PM Najib, your Government is the BIG BULLY to trample basic universal human rights. If you do not seriously redress this present situation promptly, the Malaysian rakyat would kick out your Government come what may. And that does not mean we have to wait until the next GE.
malsia1206

Hi zorro, my apologies, got to steal your photo for my support for the vigil! thanks!

We felt the anguish ,torment,humilation you had gone through.God knows.

The righteous will be in everlasting remembrance

RIP YB Teoh, hope that your death
will not be in vain and bring
about a new hope for more transparency and governance to our
beloved Malaysia.May God bless your soul.

My heartfelt condolonces to Teoh Beng Hock's family,fiancee and friends.My heart bleeds to think of his unborn baby,who lost his dear papa due to a ruthless,merciless and an inhumane system,masquerading in the name of democracy.We have had so many corpses coming out of our police stations 'under the standard interrogation' procedures,now even the MACC has gone to such length to turn out a law abiding citizen who had everything going for him into a corpse.Let this be the last straw which broke the camel's back.

Let me also remind all those perpertrators who suppose to discharge their duties in the most fairest manner,that the Universal Karmic Laws will come back to haunt all of you.How can you people sleep peacefully?

Yes Unlce Z, give truth a chance..and no cover up please..

this issue has got nothing to do with race and please stop offending each other.

they are just as sad and angry as you and many are crying their hearts out with deep condonlences to the deceased family and wife to be.

this is the time for all malaysians to be united on this one issue and not let TBH death be in vain.

i think this is the right way to respect the dead..

The baruahs will spin that we are silent because we're intimidated.

We should shout FUCK YOU to the baruahs.

As mark of respect for TBH, we should take this opportunity to galvanize all Malaysians, irrespective of race, to kick these baruahs back into the shit-hole where they belong.

But I just want to expose the downright idiocy of one MCA branch chairman who sent me a SMS about the tragedy. He claimed that the death of Teoh was the work of DAP, with the intention to incite people's anger against BN ( it was like the 911 incident was caused by the Israel Savak ). He went on the say that MACC would never be so stupid as to put the government in such controversy and that those who raised hue and cry would better have a clear mind about the tragedy.

People of Malaysia, mourn for MCA as well.

but we should not keep silence anymore.

zorro...my tears are flowing and my heart is bleeding. why do good men die? Is this struggle getting anywhere?

Uncle Zorro ,this is truly a sad week.
Got the news that former Capt. Yusof of the Ancient Mariner blog is no longer with us. We lost a good blogger who believes in fairness and justice.

And for Captain Yusof too.

We also lost Ancient Mariner over the weekend...
May his soul blog in peace

the LORD says :" Vengeance is mine!" Amen.

may GOD blesses you all always.

Uncle Zorro,
Allow me to use this space to say Thank You to all who showed support in this sad time. As a fellow PA, the strength and support shown from the civil society in a motivation indeed for us to struggle on. The personal words or concern from friends are indeed much appreciated.
Thank you, all.

It's getting sicker and weirder in Malaysia!

OUR nation is shocked by the death of a young man after he had undergone an interrogation by the Malaysian Anti-Corruption Commission (MACC). It saddened us more as he was only a witness to assist the investigation and not even the accused.

As a practising Muslim, my heart cried for justice as prescribed by our Holy Book of Islam, the Quran. Our Holy Prophet Muhammad (Peace be upon him) taught us strict principles to imagine what would we feel if such a tragedy were to happen to our own son, brother or close relative.

All Malaysians should extend our deepest sympathies and condolences to the family of the deceased.

At the same time, it is a sin to let such an incident happen without a thorough revamp of the investigative procedures.

The investigative procedures used by MACC were professionally taught by Westerners. And it is a fact that these Westerners are godless people. They do not believe in the existence of Almighty Allah nor do they ever accept that there is a day of judgment after death.

Therefore, their ways of working are based on the ends justifying the means.

To them there is no meaning of sin. They are not afraid of accountability to Almighty Allah. This clearly is in contrast to the teachings of Islam.

I would like to humbly request the National Fatwa Council to play an active role here. The Fatwa Council should scrutinise all the procedures used by MACC and give a verdict according to the Islamic ruling. This is a huge responsibility but the nation is in need of such prompt action.

Uncle Z,
Did I hear any voice of support coming from the rich and powerful chinese leaders like Quek, KT Lim and Vincent Tan and company for Teo Beng Hock ?? NONE? Why? Because they are part of the rotten system that destroyed a young man's life like Teo. They are so supportive of the BN Govt and they GOT NO EYES OR EARS TO SEE OR HEAR. What they want to hear is the sound of money NOT sound of wailing in a funeral. The rich and powerful chinese community had betrayed us and the country not UMNO,MCA,GERAKAN so on and so forth.Did any of them extended any financial support to the lost soul? NONE! So, don't blame the Govt or the system but you OWN kind i.e the greedy chinese rich towkeys. It is them who had ALL the years before you and me that had supported the BN Govt. They are to be blame for Teo's death and no one else. I hope you will dare to post my sincere and straight comment. I am very up-set and angry for his death and at the end of the day my pointer points towards these bunch of greedy ,selfish rich chinese towkeys. Pl post it for all to read. This much I owed to Teo and his breaved family. May his soul rest in peace.

It is pointless. We can hold as many ceramahs, candlelight vigils, sign as many petitions, protest, rant, whinge, moan till the cows come home, BN will still rule Malaysia.

No matter how much we register our disgust here in your blog or other blogs, it wont topple BN.

BN with the police, army, EC, MACC, judiciary, cash, media and etc is just too powerful.

In short, we are wasting our time, effort and energy wishing for the impossible.

WONDERING WHO ARE THOSE MARDERFARKER ACTING AS ADVISERS TO THAT MARDERFARKING AGENCY...

GIVE ME THE LIST SO I COULD SPIT AT THOSE MARDERFARKERS WHEN I COME ACROSS ONE!

Get someone to check the neighbor's building for cctv camera.

Don't know what to say anymore, those pariah even think of stealing a dead man handphone...

Like the tragic mongolian case perhaps we should ask who called the shot to have him killed?

His dead was a plan B option to pit DAP against PKR to ensure the demise of PR. Who would have benefited from this - of course the no. 1 idiot - the useless pm.
His wife is bad but he is the devil himself.

Since plan A failed because there was nothing for the deceased to tell, plan B was the sinister alternative, and was put into action.

unmo's survival seems like depends on human sacrifices. If this what Malay unity and pride is all about then this must be the fake defender of Malay themselves.

Bro,it is indeed saddest day in our peace loving Malaysians.
Past few days,the UMNO-controlled Berita Harian and Utusan Melayu contunue to fan racial sentiment issues and try to potrayed Melayu is genius and no one can undermine them.Nazri,famous for 'Biadab' issued the idiotic statement tried to defence now in famous MACC.
I wish that we are not born here...