Just about two years ago January 18, 2010 I posted WATCH IT SELANGOR. HERE 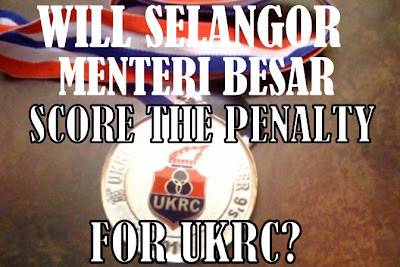 Consider this as WATCH IT SELANGOR Part 2.

Shanghai Fish too blogged on this on two occasions HERE & HERE

Nobody doubts this fact that three of us belong to the Barisan Rakyat Bloggers group but that does not mean that we will blindly support Pakatan if they fail to fight for the little men of UKRC!

From as early as I can remember the Malay Mail took up the cause of UKRC and recently my good friend Yushaimi Yahaya, Group Editorial Advisor, lent his support for UKRC, HERE

What transpired at the 30 January 2012 meeting:

Section 29 (2) of the National Land Code clearly states: 'The Land Administrator shall give to any person or body claiming to be interested in the subject matter of any enquiry an opportunity of being heard thereat, either in person or by his advocate and solicitor, and of producing such evidence, oral or documentary, as appears to the Land Administrator to be relevant thereto.

However, the DO Gombak states that no Advocate or Solicitor could be present or assist in the enquiry. The UKRC Community and Public wonders why? YB Saari Sungib who was present during the enquiry also wonders why?

Andrew Gopal was the first person invited by Dato Wan, as President of UKRC to present the facts of the claim made by UKRC of its recreational land and all relevant document from the first correspondence dated 3rd August 1957 to the approval obtained from the State Exco dated 12 July 1958 were produced to the Panel including the Originals which were verified by the Panel members. Andrew gave evidence to justify also as to the payment of $690 paid by UKRC on 25 August 1958 pursuant to the said approval and also whereby a Survey plan on UKRC land was approved by the Survey Department on 5 December 1961. The were 2 other UKRC members allowed by Dato Wan to present their views and the contribution by UKRC to the Community for the last 54 years.

The Panel took note of the facts presented by UKRC and there were formed DO of Gombak was keen to know whom could utilise the facilities of the club, whereas the other two Panel members had no question to ask.

The respondent were MPAJ, as pursuant to Khir Toyo's gazette, where MPAJ was given instruction to take control and manage UKRC's recreational land. The Pengarah Pembangunan of MPAJ, En.Yazid was in total loss when questioned by Dato Wan as to UKRC land status and history and he agreed based on the document served, UKRC had obtain approval from the State for its recreational land. He had also no objection as to UKRC operates independently as a recreational club.

The 2nd MPAJ Officer, En.Johari Atli spoke in the capacity as a Legal Officer of MPAJ, and was questioned by Dato Wan as to the Gazette issued by Khir Toyo and instruction given by the State to take control of UKRC's recreational land. He explain that MPAJ was more a Administration Authority and as it was Gazetted as a open Space by Khir Toyo, the State wanted MPAJ to take charge of UKRC recreational land. However as UKRC was doing a job, MPAJ left it as it is.

As expected, the 3 MCA members, the trouble makers in the village were there to object. The 3 are, Liew Kien Hing, Liew Mun Onn and Ms. Lee Lim Took. UKRC had in 2009 sued these persons for trespass and vandalism when UKRC was doing minor renovation to its Hall. They said that they were not allowed to join the Club as a member and if UKRC is given the land, the residents will not be able to use the club and the community hall, they may not be able service a bank loan if they took loan and the bank could auction the land and that UKRC was a dollar to dollar club, where their parents contributed 1 dollar and the government contributed another dollar to build the club. When question by Dato Wan, how they got the information, the 3 yahoos mentioned that their father told them so. They wanted MPAJ to take over UKRC to be a public club.

Then, the current Village Head of Kuala Ampang, where UKRC is situated, Mr. Lim Ying supported UKRC's activities and its land status by saying that he has been a UKRC member for the past 40 years. He disputed on the statement given by the 3 saying that all are welcome to UKRC and that they wanted d to built condominium inUKRC's land that resulted in UKRC and residents protesting which made khir Toyo to mess UKRC's land status by Gazzetting it as a Open Space under the control of State and subsequently instructing MPAJ to take control of UKRC's recreation land.

Dato Wan mentioned that a report will be prepared from the findings and evidence produced in hearing and will delivered to MB by end February 2012 for MB to make decide on UKRC's recreational land, where not necessarily that MB should comply with the report prepared by the panel members.

The hearing was held, pursuant to a motion tabled by YB Saari Sungib, ADUN Hulu Kelang in seeking the support of the members of the State Assembly to return UKRC's right to its recreation land. The motion was passed on 1st April 2010.

Its also puzzling though why the DO of Gombak did not invite YB Saari Sungib and YB Azmin Ali to attend the hearing!

UKRC hope, justice will be delivered by the panel to MB in order for MB to return UKRC's right to its recreational land and as mentioned by MB in the minutes of the motion passed, that he acknowledges the fact that UKRC has got the approval for its recreational land in year 1958 and that he is concerned about the issue.

UKRC has been informed by MB's Press Secretary today (30 March 2012) that MB will be tabling the UKRC land issue at the coming EXCO meeting on 4th April 2012.

UKRC members and the Village Head are hoping to meet/talk to other EXCO members to support the land alienation to UKRC when MB tables the UKRC issue.

UKRC hopes that MB will not be convinced with the Objections made by the 3 MCA objections.

If that happens, definitely Pakatan Rakyat can say goodbye to their votes in Ulu Klang. There is about 1000 votes alone from UKRC supporters for Pakatan.

NO THREAT INTENDED, JUST A FRIENDLY REMINDER THAT IS BEST TO GIVE AN EAR TO.

WILL YOU SCORE THE PENALTY FOR UKRC?

Zorro,there has been so much infighting among the PKR stalwarts,that it has rendered Khalid as 'Jibby ii',an hopeless irrelevant MB who has no power to correct the wrong.Thus the only thing the man can do is sit on his hands.I always stressed that the only way Umno can take back Selangor is that PR hands over to them on a silver platter.

Your article has proven once again the old adage, everyman for himself,
The rest go to hell

Don't have to hand over on a silver platter. Pakatan will lose in Selangor.
As a Selangor voter, my family and I will vote for BN.
We like TS Khalid. But we don't like Anwar who is controlling him that his hands are tied.

I was at UKRC yesterday for their Junior Football Carnival and must say that Andrew Gopal and his Committee are such a wonderful people in serving the Community.I salute their passion for sports and I can even see the Hulu Kelang Assemblyman, YB Saari Sungib whom was present, so delighted seeing the Juniors taking part in the Competition organised by UKRC.
I am sure MB Selangor will return the land back to UKRC unlike Khir Toyo whom wanted to rob the land for condominium.

Pakatan Rakyat will deliver its election promisie to UKRC.Sure MB knows that UKRC has a case and its contribution to the sports community. Otherwise why do he has to call for a Public Hearing.
BN can forget in getting Hulu Kelang.Kep up the good work UKRC.

No point in condemning the MB as another Jibby II who is clueless and indecisive. Wait till April 4th before jumping into any conclusion. Just being the head honcho in Selangor does not mean he can do as he likes. A Pakatan Rakyat MB is not like a UMNO/BN MB with extraordinary powers to do as he pleases.

Moreover a Pakatan Rakyat MB has to listen to his ADUNs from DAP, PKR and PAS. He has to be extra careful before making a decision, lest it is blown out of proportion by the evil UMNO/BN and its prostitutes in the MSM.

Let us not get carried away by declaring to vote for the evil UMNO/BN based on one election promise.

How many times have the UMNO/BN reneged on their election promises in the last 50 years? The non-delivered promises are so numerous and yet we are eager and ready to give our vote to a corrupted, racist, arrogant and scandal mired UMNO/BN.

Let us use our heads and not our emotions when making profound decisions that could alter our destiny for all posterity.

Mauriyall said:
Let us not get carried away by declaring to vote for the evil UMNO/BN based on one election promise.

If BN has failed to keep election promises that is BN true and true. We do not expect the same treatment from Pakatan. I also said:

NO THREAT INTENDED, JUST A FRIENDLY REMINDER THAT IS BEST TO GIVE AN EAR TO.

If anyone in this comment box have intimated that they will not vote Pakatan, these would be the stakeholders. They are the residence who nurtured the club to what it is today and some people want that field so that they can build condominium blocks?

To get a good picture visit their website and other postings that some of us bloggers have put up over the years. Mauriyall, I really feel for these people. You would to if you pay the place a visit.

I am all for sports and games as these activities bring together diverse ethnic groups not only to enjoy the camaraderie and sportsmanship but also nurture in them that they are Malaysians first and not Malays, Chinese, Indians and others.

To avoid any ambiguity in my stand, I fully support UKRC in their effort to retain the club and the field for residents in their area.

It would be a disaster if PR politicians let some greedy developer to grab such a prime property and take over the administration of the club.

Hopefully this too does not end up like the TPCA fiasco.

It was not my intention to belittle and chastise the actual stakeholders but was a general remark to those who threaten PR for not doing enough within a few years of being in power. That too while being sabotaged by the Federal Government and its stooges at every turn.

To me, it is ABU. I would gladly give another chance to PR to prove their mettle than to support the devil and his cohorts another 5 decades to ruin our country and bring it down to the likes of Zimbabwe.

Mauriyall, noted with gratitude to a true comrade. ABU.