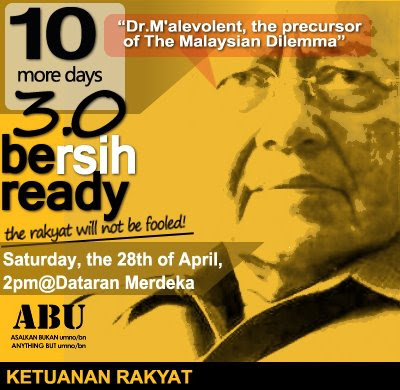 Months before GE12, Haris Ibrahim had been monitoring the SPR website assisting voters who found that they were moved either to other constituencies or even to other States.

On September 21, 2007, two months before Bersih 1.0, Blogger Ahirudin 'Rocky' Attan, a Puchong resident and one among 5,000,000 qualified Malaysian voters who never registered all his life found out when we urged him to register as a voter that he is already a registered voter in Perak. HERE

In the commentary section, AKJ mulls over the possibility of somebody stealing Rocky's ID to "elope with a starlet and get married in a neighbouring country or to start a multi-billion dollar scam to export nuclear warheads".

Rocky replied he will go to the SPR to get details as to when and how he got busted. Yep, we all went to Ipoh check out with the Perak Election Commission Office. The chief, conveniently had a meeting in Putra Jaya and his second, third in command entertained us. We were hoping that Rocky’s registered address would be one of those tin-miner mansions. Sadly it was a shady-looking shop lot….which opened its doors discretely but hesistatingly when we knocked.

But luckily Rocky’s male status and ethnicity was not molested as Blogger Major (Rtd) D Swami of the 7th Rangers was HERE. 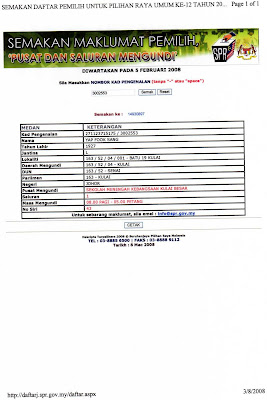 Of course, as even predicted by Dr M BN will win GE13 with the willing help of the Election Commission who has fine-tuned election fraud to an unmatchable benchmark. This time around, it will be postal votes and the phalanx of foreign workers blessed with citizenship.

YESTERDAY I was summoned to the PJ Session Court as one of the OKT I bailed in November 2009 was arrested and brought to court hand-cuffed. He has not been attending most previous hearings. If I did not appear the Rm1,500 would be forfeited. The Judge levied another 500 bucks as punishment. YB Ronnie Liu chipped in and the cuffs were off and the session proceeded. THANKS RONNIE! As a reward Shanghai Stephen and I gave YB a lift back to SUK for his 4pm meeting.

I entertained myself with what I wanted to do for sometime but had been vacillating. Here was an opportunity to kill boredom. I went into the SPR website to look for some fun. Months ago I was in the company of present and former military personnel. I learnt that each serviceman was given a service number. Numbers beginning with 300 were officers and those with 100 were lower ranking servicemen. Over the weeks I was able to get names of some servicemen together with their service number.

And you know what? I couldn’t stifle an audible WOW at some search and I got a dirty look from the Judge.

Why don’t you do what I did….here are some names and their service #. Hit the DOA on my right sidebar to enter the SPR search engine and have fun:

Hi, Zorro,
Knowing what can happen, was worried u got blown away with C4 when I didn't get your update yesterday.
Take care.

Thanks for concern buddy...cannot die so easily one.Got a few more things to do lah.Ciao.

Wow! Seeing is believing!!!
Are they aware of their ID being used by someone else?

Zorro, ain't their service no# suppose to be secret?
Can I post these findings in other blogs without getting into trouble?

Maj.Swami was aware and his service # cannot be used by anyone now. Lets hope the armed forces personnel will check. If they dont check they wont know, will they. I dont see you getting into trouble for posting the truth from the EC website.

Dear zorro,
I am not at all surprised at the extent of fraud and manipulation being practised by the EC. They were given a blank cheque to do as they like by our one and only 1Malaysia Pee EM who appealed to the scums who support him to DEFEND PUTRAJAYA AT ALL COSTS.
What you see in the electoral rolls is the handiwork of scums and vermin who will sell their soul, womenfolk and even sully their religion to be seen as the supporter of their messiah - the forked-tongue, flip-flop, lying, and hypocrite who cares two hoots for the sanctity and purity of the Al Quran by declaring his innocence by placing his dirty hands on it.

His mentor and supreme advisor, the evil Mamakthir Mohamad Kutty has instilled in him the means justifies the end. Under such circumstances more fraud, gerrymandering, blatant vote buying and the abuse of government machinery using the PDRM, RELA,etc. would be the norm rather the exception.

When one has sold his soul to the Devil for wealth, power and position, he is doomed forever. The EC and the minions under him are such a despicable lot that they show utter disregard to common decency and fair play.

The EC chairman is another Little Napoleon displaying what a little dick he is to everyone. If there was a pariah worse than the mamak, then this turd fits the bill.

Numerous daily prayers and countless pilgrimages to Mecca will not absolve his crime towards humanity. There is absolutely no salvation for these mongrels.