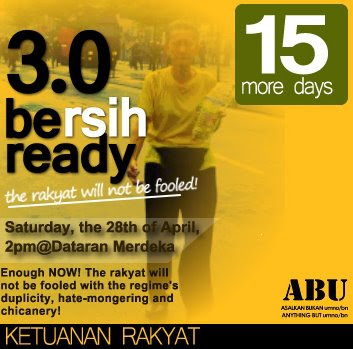 Electoral reform coalition Bersih 2.0 has unearthed more instances of fraud in the latest electoral roll ahead of its April 28 rally, including 24,105 voters in Sabah and Sarawak allegedly re-registered in Selangor.
During a press conference today in Kuala Lumpur, the Bersih 2.0 steering committee claimed that 15,520 Sabah voters and 8,585 Sarawak voters had been registered twice in Selangor in the latest electoral roll updated until first quarter of 2012

Those in 33 cities have confirmed that they will organise solidarity sit-ins on April 28, in support of that organised by the clean and fair elections NGO Bersih 2.0 in Kuala Lumpur on the same day.

Out of that, at least 20 cities have settled on the time and venues for the events and started promoting their respective events on social media and local event listings. HERE

B-bring back our dignity & rights

E-eliminate those election cheaters and schemers.

S-sit and protest for fair election

I-independent election observers from other countries

H-hinder evildoers from eroding our rights and freedom

3-three musketeers – all for one and one for all

A Painful Joke
BN GOVT IS LIKE A CONDOM

THE BN GOVERNMENT'S NEW SYMBOL IS THAT OF A CONDOM, because it more accurately reflects the government's political stance....

A condom allows for inflation, halts production, destroys the next generation, protects a bunch of dicks, and gives you a sense of security
while you're actually being screwed!

Damn, it just doesn't get more accurate than that!

Can you do us proud?

Hey Shiok Guy....long time no hear. How are the boys faring? Good of you to come by.

Thank you and they are doing fine in their own way. God Blessed.

My elder is going through puberty and hormone changes. A lot of emotional issues and self beating as late.

Our center has finally open and we have enrichment program going on in the center from 2-5pm from Mon-Sat. I am managing the center now and with my 2 kids enrolling in the center.

We have 7 kids now and a lot more is coming but frankly we do not have the human and financial resource to cater for more.

I have never left your blog as per se, and those of other too like LKS, Rocky, Patrick and more. Just that I tried to do more for the center and the kids with autism. I hope my kids and others will be independent and can take care of themselves, before I kick the bucket :P

Nice to be back, my blog shall back to the radar more soon.. :)

Shiok, where are you based now?

I am based in KL, Happy Garden