WE WANT A SIT-IN AT DATARAN MERDEKA. DON’T FORCE US ONTO THE ROADS.

Over dinner at CITTA Mall, I told the Mayor of Jalan Changkat that having Bersih 3.0 in Dataran Merdeka maybe an oversight by Bersih committee because the St. Mary’s Church is just across the road. The Mayor fumed and glared at me: “The mother-effing Government has broken every law in the book and you are worried about breaking a law they contrived for Peaceful Assembly,” ……..and doused his anger with a big gulp of his beer wine. 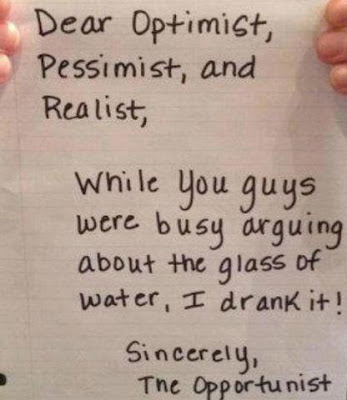 “This is the one we were talking about, supposedly called the anti-terrorism law,”

Judge Napolitano: Why The Patriot Act is Unconstitutional. – YouTube - http://www.youtube.com/watch?v=kNRSs6LsGeI&feature=related

We really like that gem of a pic on the optimist,pessimist & realist. Sometimes we know we have to look very hard to find & unmask the treasure you intentionally hide away in Zorro Unmasked. Afterall you dun like blady pampered kids we know that.

Something we cannot say about many spoon fed Malaysians, therien lies the

Regardless whether it's a 'Sit-in, Squat-in, Shit-on, Pee-on or Wank-out Assembly', it MUST be a "win-win" situation for both the Organizer & the Govt.

It's totally pointless for one party to say it should be held here & there, while, the other party says it should be held there & here instead. While the Govt. had given the GREEN LIGHT to Bersih to uphold their agenda & then in-return Bersih should also comprehend with the Govt.'s instruction pertaining to the venue of the so-called Assembly.

Dataran Merdeka is a historic site & it's usually a heavy traffic congested location. Moreover, it's also a tourist attraction & thus, allowing Bersih to conduct their activity the said venue would only pose a NUISANCE to other people of whom could have NO WHATSOEVER interest in Bersih's nonsense. Why disturb others due to one's own selfishness, right???

Moreover, to allow the Assembly on a tourist attraction area would only tarnish the image of Malaysians. Tourists will perceive Malaysians as a group of UNCIVILIZED BARBARIANS shouting & behaving like stone-age cavemen & cave women. If the agenda of Bersih is to make Malaysia a "Better Country", then, by displaying such BARBARIC actions to tourists will only make Malaysia a worse-off country. Macam mana nak maju???

Let's be FAIR & CIVILIZED, guys & gals!!! To have a Assembly is sure a "YES" but please do it at a appropriate venue.

Anon451pm....so tell us where is a ood location. Another run around.

Common sense explained it all.

Imagine if you yaself doesn't even know where a good & proper location is, then, how can anyone expect you to know the cause of your fighting??? Ain't this likened to a baby wanting to take part in Olympics 100m sprint but he/she doesn't even know how to even walk yet???

No offence but I find it puzzling of you to even ask such a silly question. Thanks!

Well, please don't be surprised to find out 80%-90&% of Bersih 2.0 participants were 'ignorantly' present NOT knowing the true reason of Bersih's cause. These ignorant participants were there simply becos of the hype of it. Such hype could be either triggered by words, news, actions, lies, propaganda, etc.

Scientists had proven this sought of action is called "Human Kinetic Chain Reaction (HKCR)". Such behavior are often witnessed in 'riots' whereby ignorant individuals simply follow & pay apart in a riot because others are doing so. However, when this 'Reaction' gets out of control, "Rampage & Disaster" will then occur. Scientist claimed this is a very dangerous reaction all human possessed & this reaction is almost impossible to control.

I had asked many friends who took part in the previous Bersih rally asking them why were they there for & to my surprised most of them can't even explain the true cause of Bersih. Thus, if I summarize this down demographically, I would be sad to say Bersih is a dangerous event as it could spark national disaster should it gets out of hand especially with the said reaction scientists had proven.

As much as we should respect human rights but such dangerous event like Bersih MUST be carried out in an isolated venue whereby even if "Rampage" does occur, other innocent individuals would be protected from the influence of "Human Kinetic Chain Reaction (HKCR)".

so tell us where is a ood location. Another run around.

Anon548....me not being an adult have to ask the authorities for advice as to the best place to hold this sit-in mah. Strange an adult like you can miss this.Time to change your pampers...of course you as an adult know how the pampers are worn, yes?

Doc....Human Kinetic Chain Reaction (HKCR)by any chance are you intimating that it is aka amok? In those early days in electronic organisations, we call it mass hysteria.That should be worth some study. Anyway thanks for the "enlightenment". Isolated venue? Can ah, give an example DOCTOR!

'Human Kinetic Chain Reaction (HKCR)by any chance are you intimating that it is aka amok?'

Aiyah Anon548 & Dr. Azahar, let me the smart one answer this for you lah. Asking this old wank Zorro for an answer is equivalent to asking a donkey to sit lah.

OK,OK,OK....the best place & the most ideal place for BERSIH is inside a COFFIN. Each participants should buy themselves a coffin & then lie inside it. The name of this assembly should be changed from 'Sit-in' to 'Lie-in' & all the coffins are to be painted YELLOW.

By everybody lying in their YELLOW COFFINS will also mark a TRIBUTE to that DEAD MALAY FOOL from PKR who 'mati katak' during the last assembly from heart attack.

Inside their YELLOW COFFINS, they are entitled to yell/shout how loud they want & it would not cause nuisance. Moreover, such assembly will go down into the Guiness Book of Record as the largest COFFIN PARADE in the world.

No need to thank me Anon548 & Dr. Azahar. I bet ZORRO is fuming MAD reading this now.

Bak Kut Teh....ROTFL and I have not spilled my happy hour pint yet. You have be be related to Ib Ali, no?

Aiyah ZORRO, Ib Ali is an ARSEHOLE & the difference between BERSIH & IB ALI is that 1 is a 'katak yang belum mati' & 1 is a 'katak lemah mati sakit jantung'.

my dear zorro, there is a big difference between 'amok' & 'human kinetic chain reaction'. Based on your question, i can see you lack the understanding between the said 2 definition.

i don't know how on earth you came up with the word 'mass hysteria' as this word was frequently used by the olden days hippies high on weed & i'm worried you are once part of it. Anyway, that's history.

i'm sorry i'm unable to suggest you an ideal place for your event but if Pudu Jail had not been torn down, then, I would surely reckon that's the best venue as the jail's 4 barricading walls could prevent unwanted hooliganism from infecting other innocent individuals should 'human kinetic chain reaction' be triggered.

Dr is it? Amok triggered by non-human actions? Animals don't run amok!Prove it to me scientifically? Anyway it doesn't matter. You are a Dr, as though that carries any credible weight.

As to Pudu jail, you are off again.That space cannot hold our crowd lah. Please come up with a better alternative, doctor! I like to credit you with some good sense and propriety. You really disappoint. Amok, a non-human action!

Suggest u ignored this 'Doc' of whatever qualified discipline.

This is a give away - perhaps someone with self-inflicted wounded ego, & yet brain-washed with distorted bell-curved qualification.

A mouthful? Bcoz that's how this 'doc' can be made understanding. Remember, the saying of all shorties have extra high alter ego, to compensate for the natural inadequacy? So, only at those spurious level could they be possibly made to understand.

This is further confirmed by the Pudu Jail suggestion! Ouchx2.

Hi zorro, i'm afraid you had gravely misunderstood my explanation. With no intention to find fault here but i hope you would be clarified as per below:

1) The word/term 'non-human actions' was earlier used was becos the so-called "beings" attending Bersih Assembly are of course "HUMANS". The correct word/term of which I should use is actually 'non-being actions' but unless you regard yourself & other Bersih participants as "Animals, Beast, Monsters, Raksaksa & so on", then, the word/term I had used earlier is indeed wrong. However, this will only disgrace yourself & others being labelled an animal. I'm afraid you ought to be a little smarter in tackling specific issues, dear friend.

2) The reason why I suggested Pudu Jail was because this venue is indeed huge/big enough to contain Bersih participants. Pls. be reminded the quantity of genuine Bersih participants is actually 'less' than 1500 people. The reason why there are more than 1500 people in the previous assemblies was due to the said "human kinetic chain reaction". Should the upcoming be held in Pudu Jail (thats' if it still stand there), then, "human kinetic chain reaction" effect on other innocent individuals will be limited as the jail is an isolated venue with barricading walls refraining others to get affected by the dangerously said reaction. This was the reason why I said it's 'important' to hold it in an isolated venue.

My suggestion is only fair to the Bersih organizer, the govt. & 'the rakyat'. The reason why you see it differently from me is simply because you're currently standing on 1 side of the fence of which makes you can't see things from a "fair & neutral" perspective. This is alarming, my friend Zorro.

Judge Napolitano: “A nation of sheep breeds a govt. of wolves” – YouTube – http://www.youtube.com/watch?v=fh2eSnuFZxo

Finally, for the Bolehland "Sheeple"