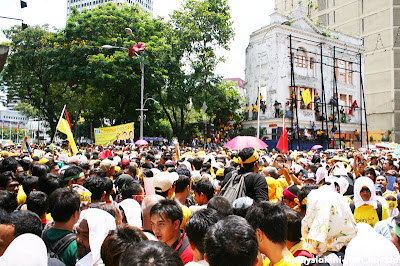 On Thursday 26 April, Old Blue Eyes aka Shar, Old Fart aka Bill Arul and I paid our respects to SB Loy at the National Press Club before going into Dataran Merdeka to lend solidarity with the Occupy Dataran Merdeka and Anti-PTPTN students.

No tents were pitched as all 61 were confiscated. The students had put up their sleeping mats in two separate groups on the padang and some were already sound asleep.

I wrote about this briefly on my Wall.

Went around to interface with pockets of people who came curious or were supporters of the students. At around 2.00am a young malay lad came out to me: “Uncle Zorro, I met you in a warong in Port Dickson during the by elections. I am here for 428. Will you be reporting live like you did in the Bagan Pinang by elections? One of your people told me what they were doing and asked me to volunteer. I sent you some sms and you used it in your live report.”

I have been at this since Bukit Gantang days and the last one was at the Sibu state elections. I did not do it at Bersih 2.0 so that I could defy the ban on me together with the 90 others from entering KL for Bersih 2.00. I immediately gave Said an answer, “Yes, I will do it on Saturday morning.” On Friday morning Virgin called to say, “Uncle B, I have booked a room for you from today on.” I told the Virgin that I am free to move around and Bersih 3.0 was not an illegal gathering and that I was going live on Saturday morning with the help of Doreen Van Nadaraj, Stephen aka Shanghai Fish HERE. On Friday night Kam K, the mayor of Jl Changkat showed me how locked down Dataran Merdeka was….blocks, metal barriers and BARBWIRES….just as Flyer168 had smsed me earlier…..but there were thousands in festive mood.

TODAY I offer you two threads, one by Abdul Haleem, a Malaysian in Singapore whom I featured recently HERE and Donplaypuks whom I have featured a couple of times under my Friday Guest Blogger.

BERSIH 3.0 and everything else which was not so “Bersih”.

You got a fake photo, for heaven sake, a clear doctored picture...come on observe a little more, don't just click only.

We all know a lot of people went...

Thanks for the support. Bersih 3.0 was the greatest of successes. Have no doubt about that.

Proof - the lying and blame game has begun from BUMNO/BN.

But can anything be more stupid than Rosemajib saying the doctors had confirmed tear gas and chemical water would not hurt a fly. Let's gas him from close quarters and see how "harmless" it is to him.

Dpp
we are all of 1 Race, the Human Race

Zorro, the picture u have is a doctored one I think. Dataran was empty, but in your picture its full of yellow shirts..

I agree this pic is not of yesterday. A Merdeka Day function?

Apologise for this misleading pic. I have put up a genuine one.Thanks for feedback.