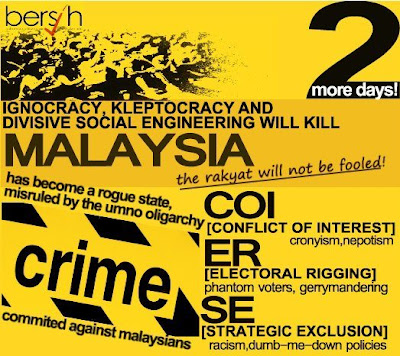 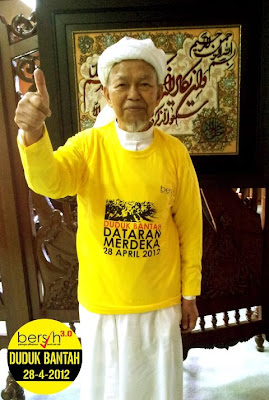 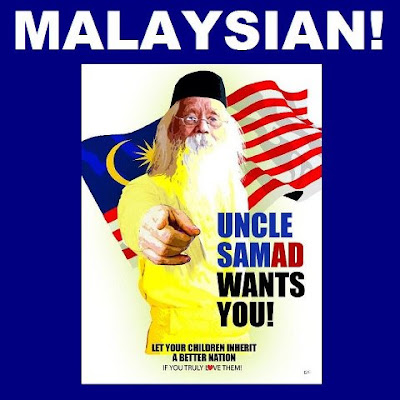 This one for Tunku Abdul Aziz

When it matters, he has shown his true colors.

See ya, of course we r not afraid

At last His Highness the Froggy Prince has shown his true color as GE-13 draws near! Does he honestly think he is able to make a difference with his 'personal opinion' otherwise why didn't he just shut the gap up, huh? Who is listening?

AS predicted he and his morons have not transformed at all he still lies when he claimed that Talent Corp has attracted more than over 600 with their initiatives. But Naljib what Najib did not tell you is the overwhelming number of Malaysians professionals that left over the same period of time. In other words the bucket is licking by a broken pipe, a lot more professionals are leaving Malaysia than those over 600 returning for the ten years they will only to pay 15% income tax instead of the 27% all Malaysians need to.
Like magicians the use of words to lie and not tell the whole truth is Najib's style. He has no answers to the French submarine deal and hasn't the courage to give his answer in a French court. He can't hide the truths any more, he is shitting in his pants. If he says he just cannot afford the cost to go to France, I will provide him with a first class plane ticket to France and a 5 star hotel stay with limousine throw in. All these will be guaranteed by a bank.

Mayor without Mandate - no one voted him in and who gave him powers like Homes minister and police?? Another UMNO Stooge needs to be taught a lesson...he and his family.....enjoy the same paint work like the last SPR/EC Chairman....next your children will also suffer....we are in anti GADAFFI- President Assad of Syria Mode!!...

Though I don't agree and understand Tunku's stand , we should not ring praises on someone when he says something that we like and condemn him as a traitor when he says something that we don't . He has clearly said that it is opinion but does not disagree with his DAP supporting BERSIH . Otherwise , we will be no different than umno/bn where no expresses any opinion and just follow what their warlords tell them to.

Turku is entitled to his opinion and yes there is a ominous element of danger we mustn't ignore. Stay vigilant, equip yourselves properly and have on hand the Suaram legal field contacts and the Malaysian Bar legal aid numbers on hand.
Brilliant uncle samad poster, zorro. Bring on B3!

I'm certainly GLAD to hear Dataran Merdeka is now closed-up for 48hrs. This is the best way to avoid further problems.

BERSIH indeed have their rights to pursue what they wish but it should be within the context of "Law & Order". Pls. have it in Stadium Merdeka as offered & as requested in the previous rally. If BERSIH thinks Stadium Merdeka is NOT huge enough to hold all its' supporters (I doubt it could even reach anywhere near 3/4 of Stadium Merdeka's maximum capacity), then, have it in Stadium National Bukit Jalil of which was also offered by the authorities. If they still think Stadium Bkt. Jalil is still not huge enough, then, I believe BERSIH are simply filled with druggies 'high' on hallucination.

Its amazing to see how some of you are taking Tunku to task for his opposing views. What happened to freedom of expression/choice?? You Opposition cant tolerate a different view than yours?? What kind or type of democracy or freedom are you people shouting about when you cant even accept Tunku's viewpoints??

Seriously, before you people go out and scream about democracy and freedom this and that, please take a honest view of yourselves first.

1) The Govt. took 1 step back for allowing 'Peaceful Assembly' for the upcoming BERSIH rally.

2) The Govt. took 2 steps back for offering alternative venues which have VALID reasons to say its' not suitable (Stadium Merdeka/Bukit Jalil was offered)

3) BERSIH took "NO STEP" back to insist the rally MUST go on.

4) BERSIH took "NO STEP" back insisting it MUST be held at Dataran Merdeka or no where else.

Kindly digest/evaluate the above & ask ourselves who is the one that is NOT willing to 'compromise'??? Correct!!! I heard you say "BERSIH". If BERSIH can't even adhere to basic "FAIR PLAY", then, how on earth can they even preach asking for "FAIRNESS"??? Amazing & yet puzzling, right???

Since BERSIH is taking such a HARD STAND on NOT even backing off half a step towards their request, then, this means BERSIH is trying to "PLAY ROUGH". Thus, I wouldn't BLAME the authorities such as the PDRM & FRU to retaliate using FORCE. It's BERSIH of which is NOT so BERSIH which started the ROUGH play & thus, NO MERCY/SYMPATHY should be shown to any ignorant BERSIH participants who eventually gets hurt/injured or even killed.

I'm NOT against the Assembly but it should be carried out in a FAIR manner by using a more CONSTRUCTIVE way. Simply behaving like a COW which can't say 'NO' is just NOT the answer & please, please don't ask me "What's the better way then?". Use your BRAINS & 'think out of the box'. Please DON'T be "spoon-fed" thinking answers will always come to you without making the effort to even think.

This is the PROBLEM with the mentality of PAKATAN RAKYAT supporters. They had been sooooo "BRAIN WASHED" until they can't even distinguish between what is 'Correct, Wrong or Neutral'

When any individual says something that is in-line with PAKATAN RAKYAT's agreement, these BRAIN WASHED DONKEYS will stand to applaud like Malaysia FC had scored 10 goals against Barcelona FC. However, when someone says something that is against PAKATAN RAKYAT's agreement, then, these BRAIN WASHED DONKEYS will condemn & insult as if their father/mother had never taught basic manners.

Which one are you???

sharp shooter....you missed the target, yah. Have you ever seen ANTS moving backwards. We are the ants but we come peacefully in hordes. No taking any steps backwards.Be sharper and know what you are shooting at...always aim slightly above the bulls eye...remember the theory of gravity. Try fishing....it is therapeutic.

malchindian, yes indeed : he's a TURKU as u have called him, TQ !

Tunku Aziz is my uncle. He doesnt care about his family members.. He never gave a helping hand to his late parents. Being the eldest in the family...where was he when his family needed help? The onus of helping out the large family was left to my late father and other elder children. He was the well off one BUT did he gave a helping hand to the poorer family members and help out with their children.. No definately not!

He is self centred and selfish. What he does is expected. When an abled educated man is heartless with his own kin..you think he care about the country and the people? Surely not...all that he does is to build himself a glorious name and hoodwink others. Its all about making a name for himself and feeding his BIG EGO!

No loss for DAP...kick him out..cos for sure he's got some other better things waiting at the sideline....its a usual thing for him....

Of course Tunku Aziz has a right to his own opinion BUT why need to make a press statement about it? He is part of DAP's Central Executive Committee, should he not show team spirit and solidarity here? Is it not enough to voice his opinion within the committee itself?

Sure, he can make any amount of press statements that he wants and voice his opinion about anything provided he is not part of an organisation. A loud "lone" voice of dissent speaks about betrayal and arrogance...

TUNKU AZIZ you're a SOB!