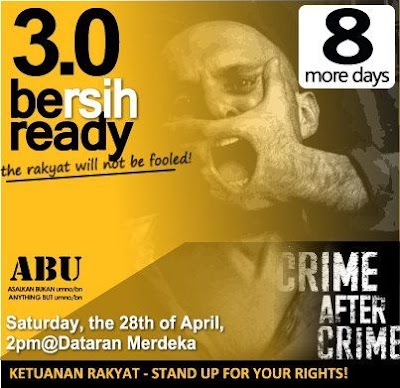 Yesterday, the 19th of April 2012, many Bills were rushed through Parliament. One of them which appears to have escaped the attention of the public was a Bill that sought to amend the Election Offences Act 1954. The amendments are, to say the least, shocking and have far reaching consequences upon the voting process.

They are designed solely for the purpose of making the voting process less transparent. Needless to say this Bill was passed.

1. Those that publish defamatory, racist and sexist remarks may do so with impunity

Section 11(c) which had required any print materials to have the names and addresses of its printer and publisher is DELETED IN FULL.

This means that anyone can now put up anonymous defamatory, racist or sexist posters without identifying the publisher or printer. Poison posters will now become standard fare. This goes completely against Bersih 2.0’s demand to end dirty politics.

s14 1(A) is replaced with a clause which allows the Election Commission to appoint time slots to determine when polling agents or counting agents of a candidate may be present. Therefore the time when an agent of a candidate is allowed into the Polling Station is no longer fixed and is now left to the discretion of the EC to decide. They are free to remove Agents from Polling Station at will.

The reality is that polling and counting agents are usually appointed by the candidate and this ensures a more transparent process. However, with the new amendment there are possibilities of abuse. The time schedule is best understood by the candidates as they organise their agents according to their time availability, as most of them are volunteers. If the time schedule is at the discretion of the EC, this may mean that different persons are being rotated and this does not allow the agents to observe inconsistencies systematically. Worse, when such a time schedule is applied during vote counting, as it again may open up opportunities for mis-counting.

3. Curbing candidates and their staff from checking on identity of voters

S26 1(e) which allowed for checking of the identity of any person entering a polling centre is DELETED IN FULL.

The implication is that candidates and its election staff are not allowed to check on the identity of voters to establish if they are genuine or even to help them to identify if they are at the correct polling station. This also means that phantom voters or multiple voters will not be detected. The 50m exclusion zone outside the Polling Centre is now extended to 100m or more, depending on what the EC to decide. This makes it impossible for election monitors to see anything illegal going on.

It will also make it impossible to see if a voter is marked with indelible ink thus minimizing its effect.

s26A Sub-section (2) and (3) are DELETED IN FULL. This means that all channels of election observation are sealed off as it now does not allow election candidates and staff to observe the registration of voters during polling day. Such an amendment opens up possibilities of abuse and fraud. There will be no more Barung Observers who were previously the only non-EC people able to look at the IC of the voter and pick up discrepancies. This is a major blow to the plans to weed out phantom voters. They can now walk in freely and the Polling Agent (even if he is allowed into the Polling Station) will have no opportunity to look at the IC of the voter. The same point about indelible ink made above, will apply

Today, BERSIH 2.0 reiterates its call for the Election Commissioners to resign immediately as it has failed to uphold the rakyat’s demand for a clean, fair and democratic electoral system. In fact it is unashamedly doing the opposite.

If anyone had any doubt that Bersih 3.0 is necessary, that doubt is now dispelled with this latest move. These amendments confirm our worst fears that the 13th GE will be the dirtiest yet.

The audacity with which these amendments are proposed and the speed with which they were passed reflects the utter contempt being shown for the rakyat’s call for clean and fair elections.

The EC must resign for allowing such amendments to be proposed.

We urge members of the public to read the amendments for themselves and then to fax the EC at 603-88889117 to express their views and if seen fit to call for their resignation.

What do you expect! Of course they will sneak something like this among the many laws they rushed to pass.

The BIG question is why are the opposition and Ambiga so quiet about this that the law can be passed without even a whimper from them? Were they sleeping???

Another step backward. Soon BN will ban elections because the rakyat does not know what is good for them.

Malaysia is turning into a big Jurassic Park!

Pack & leave Malaysia! Let the scumbags in BN roam the park and scavenge rubbish bins in time to come!!!

This is SHOCKING!
Those BN scumbags have antagonized a whole nation. This is it, ENOUGH is finally ENOUGH!!!

How did the Bill get passed so easily? Weren't there enough Pakatan MPs around to stop it? It was mentioned in tv news Parliment sitting went on till 2am Fri morning. What happened then, many already tucked into bed?

That is Malaysia's parliament the boleh land !

With the UMNO/BN in power with a simple majority and a lame dick from Sabah appointed as Speaker by the UMNOputras to look after their interest the Opposition cannot stop any Bill in Parliament.

The Opposition can point out the shortcomings in a Bill but it will still be passed because the UMNO/BN has the majority in the house to pass a bill.

The only way to stop such abuse of Parliament is to kick out UMNO/BN and never to give them a 2/3 majority.

Let us vote in Pakatan Rakyat and if possible, give them a 2/3 majority to be able to bring back good governance by liberating the JUDICIARY, PDRM, MACC, IMMIGRATION, ETC from the clutches of the UMNOputras.

It is ABU and PR for me. I have become totally allergic to UMNO/BN.

I know a 'simple majority' is all to get a Bill amendment passed, but question is were our elected Pakatan MPs representing us on the alert? How many were present that night and did they give a good fight?