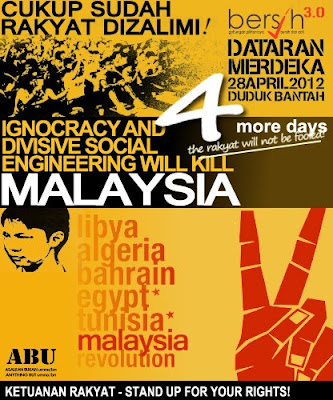 In my posting of 20 April, I commented….

“I met many friends that I befriended at rallies over the years. It was motivating that they are still in the loop. They were overjoyed that so far the HM and DBKL have not, despite their hidden hands in the fracas, issued any “No sit-down at Dataran Merdeka.” I cautioned against such optimism. Hisham has declared Bersih as not threatening national security. I never, will never believe him. It is too early for DBKL to give the no-go. They will wait to change things when Bersih is confident. They did it the last time. The no-go will come at the eleventh hour. Mark my words. However, when the no-go does come we have to be united and support Bersih 3.0 at no where else except Dataran Merdeka. It is public open space. It belongs to the people who payed taxes. DBKL is paid by the people to be the CARETAKER. Have you ever heard of a caretaker who tells the BOSS (us of course) that we cannot come into our property. We will kick ass, right? WE WILL DO THAT ON 428 YAH?”

IT HAS BEGUN….THE EXPECTED HARASSMENT.

DBKL says NO and Hisham has magnanimously offered Stadiums. We will not be duped! Their goons are capable of breaking stadium fittings, etc….and the blame will always be on US. So let’s be at Dataran Merdeka.

MERDEKA STADIUM IS NOT A GOOD IDEA. BECAUSE THE IMPACT IS NOT THERE AND THE MESSAGE IS CONFINED.
I THINK THERE MUST BE BERSIH 4
BECAUSE THE AMOUNT OF VOTER SURGE IS BETWEEN 20 TO 30 PERCENT WHICH IS NOT ACCOUNTABLE.
SO NO WAY PAKATAN CAN WIN MANY CONSTITUENCY.
THE ONLY WAY IS TO HAVE BERSIH 4 ON ELECTION DAY AND MUST ASSEMBLE 2 MILLION PEOPLE WHICH I THINK IS POSSIBLE.
TRUST ME IF NOTHING IS DONE PAKATAN WILL THRASED VERY BADLY AND IT WILL SOUND OBITUARY FOR PAKATAN THAT IS R.I.P THERE LIES THE DREAMS OF PAKATAN. OR THE END OF PAKATAN.

What a bunch of sewer politicians and their shoe-shine boys!

Of course no one believed that Home Minister when he declared Bersih as not threatening national security. Infact we were wondering when his Act II would come. Did that stupid buffoon think we believe him?

This Sat 28 April 2012, all right thinking Malaysians on both sides of the political divide will stand up and question their actions! Many are just fed-up, they have had ENOUGH and we know what that means.

in one of my earlier comments in a separate bersih 3.0 post on this blog re home minister commenting that the event is not a security threat, i said "Beware the hand that bears gift, specially so if the hand is an umno hand"

that comments still stands.....we must be cautious and more importantly we must standfast and united

for this land we call home and for our future generation

Can I find out where to obtain the yellow Bersih3 t-shirts?

Why is UMNO/BN so scared of BERSIH 3.0 which is ONLY a SIT-IN (DUDUK BANTAH)? It is to be held in an open space (DATARAN MERDEKA) where everyone can see for himself that it is a non-violent gathering to make the government of the day realize the importance of a FAIR AND CLEAN election.

It looks as if the UMNO/BN government is so dirty and wishes to remain so that anything to do with a CLEAN AND FAIR election is anathema to them.

Let Najib, Hishamuddin and Nazri come up with their usual contradictory statements to dupe the uneducated poor to think that BERSIH 3.0 is a tool of the Opposition. No one except the UMNOputras, Mat Rempits, Perkasa, Perkida and the UMNO thugs and miscreants are against a CLEAN AND FAIR election.

UMNO/BN was able to rule for the last 5 decades through DIRTY AND FOUL elections by gerrymandering, vote buying, proxy voting for the dead and non-existent voters and fear mongering. They created race based politics and have gone a step further by bringing in pitting Islam against all other religions in the country.

UMNO/BN has become poisonous to the well being of the state and its citizens. They want the present status quo to remain in perpetuity so that they can keep plundering the wealth of the country for themselves and their cronies.

Let the Organizers of BERSIH 3.0 stay firm and not give in to pressure or sweet talk from UMNO/BN.

The General Elections should not be allowed to take place without the reforms in the Electoral Roll and the EC. The demands of BERSIH 2.0 must be met. Hole BERSIH 3.0 at DATARAN MERDEKA on the 28th as scheduled to drive home the message that the citizens are genuinely fed up with the present state of affairs.

The Home Minister this time round is diverting his pediment onto his lackey. He is just trying to be a nice guy, for a change, especially so with GE just around the corner. He must think we are fools that have been led around b the noses for so many decades and can be led around once more.
But a leopard never changes its spots !
Do one more thing just kick these deceitful and corrupted scumbags and parasites from Umno out of Putrajaya in the coming GE. They know their end is near and has got the P.M.out pleading for one more chance and telling lies that his Talent Corp. has succeeded to bring back over 600 of them and not for the added incentives he is offering ! Reduced taxes, free import taxes for two cars just to name a few.
Soon it will be more cash incentives !