GET UP, STAND UP! 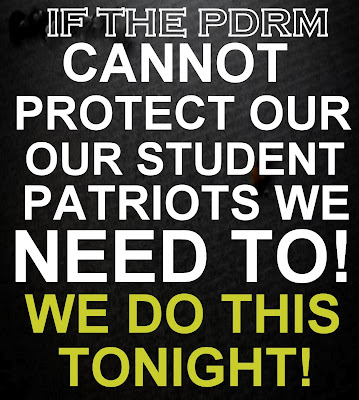 GET UP, STAND UP SPECIAL BUNCH!

Camp at ya own risk. If those STUDENTS think they are TOUGH & HEROIC, then, why CRY like a BABY when they encounter problems, rite??? I'm puzzled why people instantly finger point it at UMNO/BN when there's no single proof to prove so.

Everybody wants to be BRAVE but only a handful that are indeed BRAVE. Those who thinks/like to act BRAVE but always end up only knowing how to complain/blame are just MERE WANNABE BRAVE HEARTS.

The students think Dataran Merdeka is their father's house ar? You think so easy to simply occupy ar? If you can occupy, others also can occupy. If this happens, then, toughness should determine who actually occupy the spot.

Stupid dumb bunch of students. Why bother being students with such dumb brains?

Eehhhhhh....may i ask do what tonite?

Are we suppose to reply on Zorro & gang to protect us? These old stooges will faint & die of heart attack like that PKR fool who mati katak in Bersih 2.0 lah.

i sincerely see BERSIH 3.0 gonna be much more worse than this. the best thing is too stay away from dataran merdeka & don't get into unnecessary problems. not worth getting into trouble for it.

as much as free & fair election should be upheld but our life is even more important. just stay home & enjoy ya weekend better. don't get brain washed by Bersih & PR blokes. don't get used by them for their own political gains.

let PR & Bersih fight against BN themselves. we just sit & watch without needing ourselves to get harmed.

next time around if there is an attack just retaliate and fight them.
Nothing to afraid of any more and there is no such thing as mati katak as said by Bah ku teh. It is all the fight for justice!
So what just do it and fight back.

I'm a student in UiTM & I have witnessed 1st hand incident towards the entire fracas which happened early this morning. I'm afraid the media/press had reported their story wrongly. Pls. kindly allow me to highlight my fair share towards what I've saw before my very eyes. It's as follow:

I can't remember what time was it but it was certainly after 2am after my trip to the nearby toilet. I saw a group of man wearing mostly 'hitam' & one of them (a gemuk) introduced himself as the 'leader'. He told a few of us he & team are here for a "clean-up" exercise becos DBKL told them there are full of rubbish scattered around Dataran Merdeka. I then asked him what rubbish is he referring to & he replied "saya datang sini buat tugas aje". I then asked "tugas apa?" & he replied that he & team needs to clean-up tents becos' Dataran Merdeka is 'not' a camping site. Later, one of my friend shouted & yelled at the 'gemuk' telling him to "Belah & pergi mampus". Next, the entire black team started their operation.

I regret to say we as the students were wrong as we are the ones who provoke & started the entire fracas. My friend who got injured was the one who started hitting 1 of the guys in black first & my friend now is feeling guilty to be the actual cause of the entire fracas.

I admit we as the students participating in the camp assembly are a bunch of students whom always fare 'badly' (ooopps sorry, I mean horribly) in our exams/studies & this is why we are protesting for "Pelajaran Percuma" becos if there's no 'free education', all of us there will end up as "kutu" whom can't even secure a job such as taxi driver. I admit we are a "Failed Lot". We simply love 'Free' things & what else more "Free Education".

The Men in blacks are just doing their job. Please put the blame on us as students of idiocy who can't identify a proper place to camp. We didn't "sesat dalam hutan" but we surely did "sesat di tepi jalan".

Thank you for ya attention, Tuan Zorro.

There is no 'escape plan' when the state uses it's might to oppress it's people into meek submission. There is no psychological security in escapism from executing your moral obligation. You will pay the price for your cavalier indifference. Ignore at peril as the state will tighten it's ratchet on you. You have to take ownership of the issues that plague this nation that is quickly descending into a savage state. Intervene now before it's too late! We made this govt...we must finish it! The inner is the outer..there is no division of realities! The society is us!

Thanks Noor Hayati Farhan for the feedback.We can all learn from this if proven correct and truthful. Thanks again.

Noor Hayati, DBKL cannot ask others than their own personnel to do the clean-up. They should be in uniform, yes? We have to find out if DBKL directed these black clad cleaners!

The next exercise would be cleaning-up the YELLOW MAGGOTS come 28th April.

these trolls are annoying but i hav to admit their comments are really damn funny & creative.

Wow, a lot of strays coming in with their mangy comments. Must employ DBKL to help.

this is the problem with malaysian students. When they are supposed to study, they don't study. They'll go & do all sorts of nonsense besides studying. Now they got into trouble, they merajuk here & there.

Don't waste your breath on these jaguh kampungs. They were probably thrown a bone by their master to bark at your site.

But seriously, if these are the type of scraps who are left in Malaysian, I suggest you and all other progressive thinking Malaysians to pack and leave Malaysia for good. There could be millions of such Malaysians but so what! Just leave! Go somewhere where you are appreciated as human and you can contribute your skills.

Malaysia is already a failed state. Corruption is legal and actively promoted. Thugs roam the country and destroy while the so-called law enforcement people stands by and watch. Better still, these law enforcement people take part ... they take bribes, they bash up people. The Ministers and their assistants take money from the country as if it is theirs and they did not even be discrete about it. They threaten you openly if you question them taking the money.

So, Zorro. Just pack and leave Malaysia. Let Malaysia rot. Pretty soon, these scum bags will have no one else but themselves to screw.

And then, they will be screwed by other nations and they will be relegated to the bottom rung of society, becoming servants to foreign masters ... they work for the bones that are thrown to them from time to time. These scum bags are too stupid to do any work that requires intelligence.

Hahahahaha Anon5:16, you are a funny dude.

Firstly, you are asking Zorro to leave the country but may I ask to where? Timbuktu? Even Bangladesh or Afghanistan would accept expired blokes like him la.

Secondly, you are advising others as if you're an expert & so may I ask had you left the country yet? I believe "NOT YET", right? Well, should I be wrong & if you did have left the country, then, you're even WORSE than Zorro. You're a COWARD who left your homeland without putting an effort to fix it & yet u got the cheeks to give advice. I pity your ancestors becos' they tried so hard fleeing your original homeland either in China, India or Jawa to come to Malaysia only to see to have you fleeing to another country like a STRAY DOG being chased away from my gate. *Sigh*

yo Guru,
Why all these dogs following you around. better stop throwing leftover beer cans in the trash.

Not to worry Hawk....these strays only sniff and incapable of any bites.

I was hoping to catch you at Dataran last night. Been some time, yah?

I'm sure these status quo sanctioned junk yard dogs of blogosphere are just mischievous little farts, as far as Cikgu Bernard Khoo is concerned. Their barks are worse than their bites. If ever there's credits due them, I'd say its because they walk in a pack,and shoot in the back. Believe me, this senior citizen of our presently tumultuous nation have seen worse, circa May 13th 1969.