The timing could not have been worse. Just when the Election Commission chairperson pronounced the electoral register the cleanest in the world, video footage surfaces as proof of the claim the rolls are sullied. In his constant avowals that the electoral register is as clean as a hound's tooth in the face of recurrent evidence of its contamination, EC chief Abdul Aziz Mohd Yusof is getting to resemble ‘Baghdad Bob'. Followers of CNN's coverage of the 2003 American invasion of Iraq will remember 'Baghdad Bob', the Iraqi information minister who cut a pathetic figure in his daily press briefings that insisted the American advance on his country's capital was a fairy tale. If the performances of Muhammad Saeed al-Sahhaf, dubbed ‘Baghdad Bob' by the press, were something out of absurdist theatre, what to make of Abdul Aziz's insistence the past year, as sundry signs emerged to the contrary, that the electoral rolls for the 13th general election in Malaysia are above board? 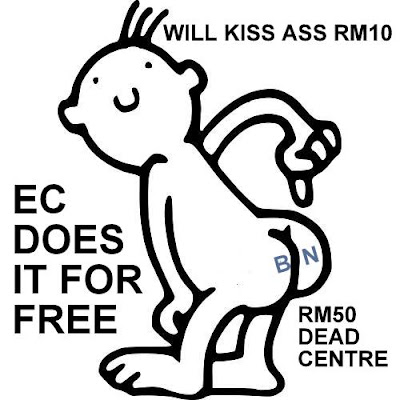 UNCLE ZORRO
UNCLE LIM KIT SIANG COMING TO CONTEST IN MY HOME STATE JOHOR , I WANT TO ROLL OUT RED CARPET LOR FOR HIM , REALLY GOOD NEWS OR WHAT ! YIPPEE

give this moron some brain food.

Zorro, shouldn't the countdown read 5 days (instead of 6) to Bersih3?
My logic? It's 5 more sleeps to Bersih3. Ta