In 1974 and in 2013, the Malays opposed the government, but Najib has created a red herring and claimed that in GE13, it was a Chinese tsunami. 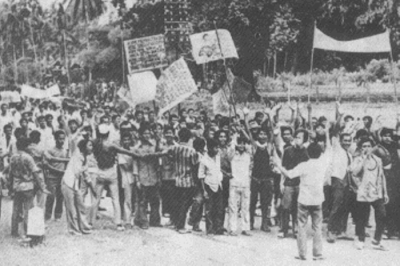 The root cause of the BI was abject poverty and starvation. The rubber smallholders faced ruin when the global price of rubber plummeted. The farmers could not cope with the rising cost of living and rural families had to forage for food in the jungles.

IT IS NOT!
It is Malaysians fighting tyranny. 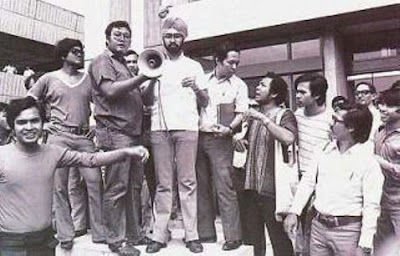 Abdul Razak warned of tough reprisals and over 40 students and lecturers were detained under the ISA. Among them was Anwar Ibrahim, who was detained for two years.

The wounds which Abdul Razak, Mahathir and Najib opened are still festering.
Our awareness of their crimes and of their despotic rule are more acute.

Their policies have cast long shadows and there will be more BALING INCIDENTS until Najib and the illegitimate BN government step down.

Meanwhile Shabery has turned cheeky to release Tanda Putera and threaten to follow red dot to make websites with political news to get lesen from BN!

May I suggest that "someone" creates a Wikipedia entry for the Baling Incident?

Now Turkey also have their version of Bersih Rally!

Ambiga said that the electoral reform pressure group will support the ‘Black 505’ rally to be held by Pakatan Rakyat in Kuala Lumpur on 15 June should it aim to urge the Election Commission (EC) to resign.

EC must be removed for the damage inflicted on our democracy! We can't watch and remain silent pretending that all is well with the recently held election. Every rakyat has a right to voice out their dissatisfaction.

Further inquiries have shown that the well-funded UMNO/BN conspiracy to demonise and destroy the DAP (the DDD Brigade) has a central high command and was hatched as far back as September last year or some eight months before the dissolution of Parliament in April and not just three months in January as earlier thought.

The spawning of the outrageous allegation of a fictitious DAP-funded “Red Bean Army” of 3,000 cybertroopers with a budget of RM100 million to RM1 billion in the past six years is just one of tasks of this secretive but well-funded “DDD” Brigade.

bloggers now must be careful as sedition ac can send you to Jinjang Hotel!

When supporters allegedly provide fund to the opposition, the police cry foul and threaten action. But when Umno-BN gets financial aid from those 'biggy' (name withheld) companies, then that's perfectly acceptable, normal and encouraged.

It's a case of "don't do what I do, but do what I tell you to do". I can imagine how foreigners get tickled each time they're informed of such lop-sided governance - for want of better things to do, perhaps.

I can't help but wonder why BN is such a bad loser. You have governed this country for over 55 years, but can't you play this political game more gracefully?

Let there be fairness for once and fight it out on a level-playing field.

Hee hee hee! I left the country many years ago for the same reasons that hundreds of thousands of Malaysians have been doing. Now and then, I return to Malaysia as a tourist.

All I can say is I made the right choice. I am living a far better life where I am now than I was in Malaysia.

For those of you who are still in Malaysia, my strong advice to you is LEAVE MALAYSIA! There is no point in saving the world when the people that needs immediate saving are those closest to you, by you giving them a better present and future, elsewhere.

Let the country rot! Its current leaders, their ardent supporters and their families are destined to be colonised and treated like second class people all over again anyway.

Umno is seen — and it is true — to fight for the interests of certain people and its members only.

"Umno fights for positions and rank, to enrich themselves, for reward and their own pockets," Dr Mahathir said in a stinging evaluation of the party that he dominated as president from 1981 to 2003.

The above was reported in the Malay Mail. Why are the people of Malaysia still vote for UMNO when Mahathir already told you guys that UMNO politicians only fight to reward themselves (him included, I suppose). How to enrich oneself if not by corrupt means? Since Mahathir already admitted that UMNO politicians reward themselves, can the rakyat of Malaysia go and make police reports so that the MACC investigate this?

Anon125opm, we will not let the country rot. We will prevent the rot. It is too good a country to abandon.Only if you feel that you are second class, then you are. Only then should one leave. Good that you believe that you made a good choice and there is nothing wrong with that.Malaysians today will not give up a struggle so easily. It is our young people who are fighting back.This you might not be aware of.

Anon125opm is likely one who ran away with 'black money' he/she laundered?

A NGO have requested the government to censor Facebook!......sore loser.Cannot beat us then ask to censor FB.You can also censored You tube,twitter,google,malaysiakini and all online news that speak the truth so that all of us will only read Utusan,Star,straits time,sin chew!

Anon428pm, I would not judge Anon125pm so harshly. Everyone has a right to choose his place of abode.

There are many reasons for a person to consider emigrating. I left Malaysia 30 years ago for my children's education and I have not regretted a day I made that decision. All of them graduated and holding post graduate degrees. Also, holding fine jobs in Singapore and Australia. They have become Australian citizens but, I kept my Malaysia passport and I shall fight on!...until my brothers in the land will see a beautiful rainbow country....a place they called home, Malaysia.

go to hell lah Apek Tua, you Chinese are ungrateful lot. Take only never give back. See what you get from Anwar Ubrahim? Nothing. Just live on your pension. You are aleady old. Kubur sudah tunggu.

Going by the actions of the HM, the Coms M together with the tandem actions of the new IGP, Bijan's cabinet certainly looks lethal. Add the ex- judge and the winner of the PC award and the infamous Mamakthir.... the country is heading towards a towering inferno! Definitely not a One M reconciliation process!

Anon 11:46.
What have you given back to the people of Malaysia? Have you paid any income taxes? What kind of contribution have you made? By spewing venom is not contribution lah. Most probably you are the ungrateful one who only knows how to take. Kubur memang menunggu untuk kesemua manusia. Siapa boleh lari daripada hakikat ini?

The top Umno leaders and their lackey public servants seem to have modified the Air Asia slogan ‘Now everyone can fly’ to ‘Now everyone in Umno and the Public service can lie’. Najib lied about Altantuya, MACC lied about Teo Beng Hock, the police routinely lie about the deaths in custody and the encounter killings, the top election officials lie about the indelible ink and their other crooked activities designed to help Umno cheat and win the elections. So why shouldn’t the DBKL chief join the above crowd and lie so as to please Najib and earn brownie points for himself?