THE ONLY WAY TO END TAIB’S MISERY IS THE ABU WAY! 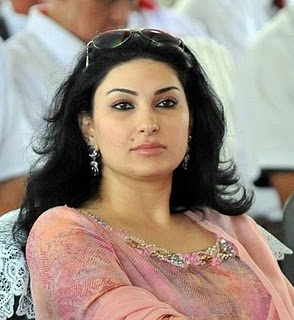 There is talk that Taib had unleashed his anger when he returned one afternoon to find that his young Syrian-born wife Ragad Waleed Alkurdi was not at home. Does he feel out of place in her young energetic life and is this making him more possessive?
Rugged Ragad is said to love fast cars. Is Taib up to it if she decides to try out one of the many fast automobiles at their homes by going 150 miles per hour?
Everyone is now waiting with bated breath to see if there is going to be a baby on the way. After all, the rich not only keep money in the banks, they can also have their own private sperm banks.
If Ragad were to have a baby coming along, close friends of the family say it would greatly upset his older children. Sulaiman is already at odds with his father and the one who was most unhappy with Taib’s marriage was Hanifah, the baby of the family until Ragad displaced her as the family’s youngest member.
After all, having lashed out at her husband in front of office staff at Wisma Bapa Malaysia on Friday 12th October by delivering a sharp kick on his shin, we now learn that Sarawak’s ‘First Lady’ was back publicly attacking him again in front of dinner guests last Friday evening!  According to reports:
”Ragad threw and smashed Taib’s head with her hand phone in front of many guests who came to his residence last Friday. Everyone left after the incident happened”.

How can Sarawakians allow a foreigner to brutalise their revered chief? How can they allow such humiliation to be inflicted on their  pak uban. Perhaps it also came to mind how his son Sulaiman was well known for his brutal attacks on former Deputy Chief Minister George Chan’s daughter, before she left her husband.  Perhaps he has more sympathy for her situation now?
Almost everyone in Sarawak can sympathise with Ragad’s feelings, but since they are a more peaceful people, they should consider the more effective and permanent way of relieving him of future beatings the ABU way!

Footnote: Since no Act has yet been passed on husband bashing, we homo sapien belong to the animal class classified as mammal. As such the ACT below might apply.

PUTRAJAYA: Veterinary Services director-general Datuk Dr Abd Aziz Jamaluddin said “Anyone caught being cruel to animals will face a fine of up to RM100,000 and a jail term of not more than six months under the Animal Welfare Act to be tabled in Parliament next year, (2012….. Ragad would escape prosecution if it is still not implemented.)
He said the Act covered all animals, including fish and insects, whether owned by individuals or businesses and would define as cruelty the failure to feed them.

It must be a daily nightmare for her having to face a bag of skins.

Hahaha!! ..and when his sent of dentures would do the Wayang-Kulit
in the still of the night!

Maybe Related to President Assad of Syria......?? anyway only sandiwara...ABU-BN is BEST!!

Say NO to THIEF Minister of Sarawak ! Enough of stealing & looting and raping Sarawak's wealth.

She has learned to like eating 'kuaci', and she enjoys eating until she falls asleep.

As for the Veterinary Director generals's ruling, we should allow mosquitoes to bite on, instead of smacking it?

WHEN A HUMAN WHACK ANOTHER HUMAN THE FINE CAN BE JUST A COUPLE OF THOUSAND RINGGIT FINE BUT WHACK AN ANIMAL YOU GET A WHOPPING RM100,000-00 FINE!!!

Poor rich bastard, having to take viagra everyday is insufficient to
tame a foreign bitch! Any further distractions from her may cause his heart to stop clicking...this is the price of getting an underage wild fun loving "animal". Allah must have sent this woman to be a curse to this rotten, corrupted little white rajah of Sarawak. The beginning of the end of Taib's animal kingdom.

There is a Chinese saying that means roughly "human schemes and acts, heaven looks and records". Perhaps, what is going on is just payback time!

The only way out of these shambles is to have these pretenders voted out of their ivory towers in the coming GE ! Don't forget to seize back all that is stolen from you thereafter.

....can somebody please go and check the armed forces c4 stocks.... another foreign looker is going to get it....

Back in KL we have Prime Minister Najib Razak at his Diwali sandiwara best, promises the Indians "No Batu Caves condo if BN regains Selangor"!
Man, he sure sounds a Saint, reminds us of ex-MIC chief Samy!

Go on continue to screw the Indians till the eleventh hour of 13th General Election. Hope they wake up on time before casting their votes!

No one escape Kharma ! Well the show has begun and we have yet to see his downfall!
For the rich and famous their downfall will be the hole problem ..hehehehe!Can you blame her ? His old shaggered paws stroking her silken smooth skin ? It gives her the crisp man!Well as they usually say this old man will die for money or a .unt ? good that he has now met his match begging for that bodily goodies!

live our life with the end in mind so that we live mercifully while we are alive!

having such a young wife at such an old age is just dessert for a silly old man. i wonder who is the trophy now?

Taib should be worried of another carpetman!

Anon, I had to delete your comment. Your request that I pass around your gossip is despicable. Our subject is in KL and a close friend just saw him a couple of days ago. Pls peddle your gossip in some other sites, not here.

lim kit siang and you make a great couple