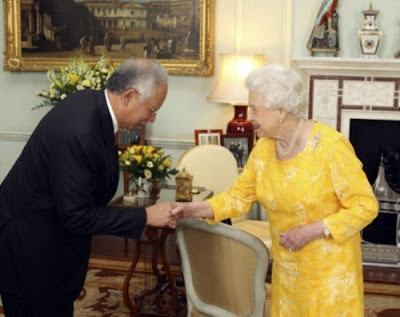 could land you in the 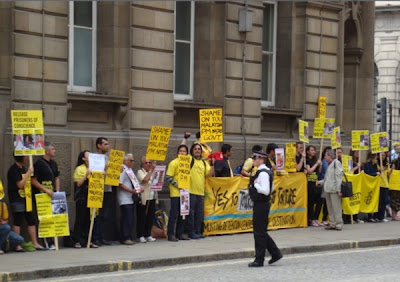 WHAT BERNAMA DID NOT REPORT BUT SARAWAK REPORT DID!

The flash crowd that turned up to boo Najib’s event at Mansion House (the official residence of the City of London’s Mayor) was larger than yesterday’s outside Downing Street. They had been joined by Amnesty International, who have spoken out about the treatment of the Bersih demonstrators at the weekend. Amnesty commands considerable respect in the UK.

The Malaysian PM had come to court the City’s investors and it was embarrassing. Investors do not like countries with uncertain human rights records and an unhappy middle class.

Few non-Malaysians turned up in the end, but some of the investors who did went and chatted first to the crowd of protesters outside. One, who described himself as ‘working for a global investment company’, said that he was well aware of the human rights issues in Malaysia and confirmed that his company monitors the matter and that such issues are of concern.

Brushed off
Meanwhile, the main topic in the crowd was the news that Najib’s lunch with Cameron had been cancelled. Was it owing to the human rights issues or simply because the UK PM was too busy they wondered? Neither looked particularly good from the perspective of the Malaysia PM !

Once again this gathering went off peacefully and the policing was minimal and friendly. Malaysia secret service people were there of course, frantically taking photos of the crowd with the doubtless intention of finding out as much about the Malaysian nationals there and later making their lives as difficult as they could. So we photographed them too.

Najib swept in at the agreed time with a big convoy of Malaysian cars and hurried up the red carpet inside. He saw the crowd and gave them a cheery wave – as if they had come up to give him their support! But, he didn’t risk going over to give autographs!

The Queen is known for her wits! So he bowed eh?

He'll need to bow lower and tread with care when he returns and emerges from his plane at KLIA, or we challenge him to dissolve Parliament and call for GE-13 since he is so sure(cock) of himself and his regime!

The grand old lady must be a avid BERSIH follower.

I like the picture. Her Majesty has class...so sweetly subtle!

Najib's pig farm courting investors?!...good joke. Which foreign companies will bother with Bolehland when they have the Chinese market and the investment opportunities there. This is just a shopping trip for the self-claimed Fart Lady...Lady Botox.
The British Queen in Yellow sure knew the way to amuse herself... very graciously.

I see Yellow, every where.
But I like the color of gold.
How I wish all I touch turns to gold.
By the way, is the Queen, in protest too?
wa..ka...ka...ka

Maybe the Queen did intentionally
wear yellow to pissed Najib off
because her staff told her that
yellow color is forbidden in Malaysia because of Bersih.It is indirectly a snub at Jibby.The queen knows that Jibby's days as PM are numbered.I think that that
Buckinham Palace ordered Cameron to cancelled the luncheon.The Queen is upset because of the rowdy behaviour of our GOM
ordering the men in blue to attack the Tung Shin Hospital.

Also the Queen saw images of the men in blue brutalising peaceful protestors.The Queen should have ordered her officers to arrest Najib and his boys for war crimes.
Attacking hospitals is a warcrime.
And war criminals have no diplomatic immunity.

Next time our Special Branch start taking pictures, not only take pictures of them, but immediately call the immigration people and tell them that these guys are working without a permit. Surely their tourist visas or even business entry visas would not have allowed them to take pictures in furtherance of their duties which can be for a purpose that might be detrimental against human rights.

hahahahahaha... Your Majesty, BERSIH salutes you.

Najib officially concedes defeat as he bowed to YELLOW!

The Queen was on our side. Kotor, eat your heart out!!!
Najib, did you have the balls to make a diplomatic protest to the Queen?...UMNO dickheads detest the illegal Yellow.

Just giving her support to our Ambiga, i reckon.

oh no! now we have to ISA the queen for wearing yellow!

In Bahasa Melayu, it is called "Menyindir" or subtle repproach.

I saw his face blushing and his pink lips murmuring!

I think Her Majesty looks lovely in yellow, don't you? And all those yellow roses at the back? Nice subtle touch, if you ask me, Zor!

he was saying to QE,

Hey, Queen ...come in YELLOW then you baru tahu !!

Queen is telling Jibby that yellow color clothings should not be deemed to be haram!

Looks like these goons will ban our Royalties form using YELOOW as their colors now! kekekekekeke

She sure has a wicked sense of humour, eh?? heheheh... Jibby, u dirty fella, Yellow is the colour this summer!

With US$33 trillion to her name and at her disposal the Queen won't only have wits. She'd have plenty of warts, too! :D

Najib's action pisses off the Queen too.
This is a diplomatic slap.

Najib should count his blessings the Queen left him some breathing space, did not totally slam the door at him though the intended British Govt Luncheon was snatched back. LOL!!!

Let's hope the Pope will don on something bright yellow too when Najib comes acalling.

without internet, chinese-paper readers will NEVER know of her majesty's humor/sarcasm in YELLOW !

Oh yes, Britain could do with Bolehland's timely Projects/Deals/Donations...why not?

Speech by the British High Commissioner at the British Malaysia Society event - http://ukinmontserrat.fco.gov....=599960082

Jibby & gang going to Rome next to meet the Pope...

To talk about the "A...h" issue or Bolehland's donation to the Vatican?

OANA (The Organization of Asia-Pacific News Agencies) - http://www.oananews.org/view.php?id=187580&ch=BNS
July 15, 2011
DPM TO WOO SURABAYA INVESTORS TO MALAYSIA
SURABAYA, July 15 (Bernama) -- Deputy Prime Minister Muhyiddin Yassin is arriving here later Thursday to a busy schedule, which includes a meeting with a group of young Indonesian entrepreneurs and corporate figures in Surabaya in his effort to woo investors to Malaysia. The Deputy Prime Minister, who is accompanied by his wife Noorainee Abdul Rahman, will be here on a three-day working visit until Saturday. Surabaya, the second largest city in Indonesia after ...

Rather, Bolehland can do without them all...!!!

Jibby, Mama & gang are enjoying the last kopek, to spend more of the the rayaat's tax $$$ with new deals/projects!!!

Hmmm... Looks like the PM was checking on the Queen's finger to see if she too has a RM37.0M diamond ring too. I wonder who's ring is bigger?

HM The Queen ,sure had a wicked sense of humour...but oh boy don't i just love it..! Long live the Queen ER..