Citizens of Pahang! Since the beginning of the Anti-Lynas campaign, much has been achieved by the people of Kuantan. People getting together to avert a future disaster has stopped construction of the site. International experts have been summoned to make an assessment. But something is still missing……only the Kuantanites have organized themselves, despite intimidation from “hired” pressure groups. 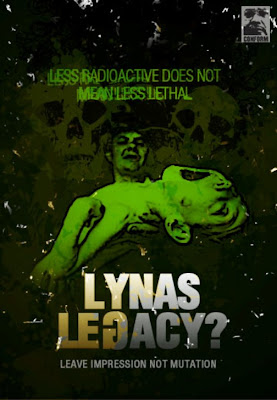 Citizens of Pahang, your votes sent the people (listed below) into Parliament and your State Assembly. You must now encourage them to support the Anti-Lynas campaign. You have friends and relatives in Kuantan and they need YOU to get your YBs to make a stand on LYNAS. Never forget that YOU put them in those constituencies to represent YOU. THEY must serve YOU now. Serve them with a notice that they must show their support for the Anti-Lynas campaign. You owe this responsibility to your state, your relatives and friends in Pahang.

Nothing is guaranteed when radioactive materials are concerned. Think Fukushima, think Bhopal, think Chernobyl. If LYNAS is stopped, the danger of radioactive leaks, etc. vanishes and Kuantan is saved and your children and their children is save from harm.

ACT NOW….call you MPs and Aduns. The children of Pahang and their children depends on what you do next.

I have left out the Adun of N36 Pelangai, the MB as he feels that there is more danger in the cell phone than thorium poisoning!

God Bless All the people in Pahang.

Your MPs and Aduns

Citizens of Pahang feel that BN will protect them from the effects of radioactive leak. Afterall, there are so many MPs and aduns from BN and they feel very safe. Since they themselves are not concerned like the Perakians, let it be an unpleasant gift from BN for their next generation. Afterall, they may not be around to see the effect.

Since the BERSIH 2.0 date is getting huge attention. I wonder if folks from the Anti Lynas would like to join in.
Make it a big rally. A combine rally.
Anti Lynas group gets to carry their own message.
Can this happen?

If the citizens of Pahang put pressure and lean heavily on their MPs and SA members and let them know that they mean serious business,even the Umno members will cave in.If they know that their getting elected in GE13 depends on their getting Lynas out of Malaysia then only will they wake up from their sleep.

These Umno Aduns are put there to toll the party lines.You have to pull them by their noses because these people are bred to be led.They have blind allegience to their masters.When they know that their livlihood is on the chopping board will they listen to the people.

Malays form the majority in Pahang.It's time they stand up and be heard.It's time they ask Abrahim Ali of Perkasa and KJ of Umno youth where they stand.To stand for Malaysians against a foreign firm coming to our country to create havoc.Or to stand against Bersih which is trying to fight for a more neutral EC.

Isn't this a bit odd ? Isn't Pahang a part of Malaysia ?

so why Pahang MPs or Aduns only ?

Are the rest of Malaysia dead ?

Hmmmm. How many of these VIPs actually live in Pahang or spent most of their time in Pahang? How many of them can stand up and say, I do not own another residence or long-term accommodation other than where I stay now in Pahang.

I bet you most of them are only in Pahang for meetings and even then, they lived in posh hotels.

OH, my conjecture applies to ALL Vips inclding from BN or PR.

The people of Kuantan against Lynas.Is it just a group of residents against Lynas or is it against Lynas and Umno.All the warlords of Umno,lapdogs MCA and MIC are so quiet as a 'TIKUS'.These goons when you need them you can't find them.When you don't need them they are always a nuisance barking like they are on heat.These good for nothing makan gaji buta,creepy like bloodsucking leeches.

Uncle Z,how to distribute those Chernobyl pictures to all Kuantanites, and surrounding townships.Put them under car wipers. Get them pasted on lamp posts, after all Ah longs can do it, why not for a good cause? ISA No?

Radioactive wastes do not differentiate race. Bukit Merah is a good example. Let's stand up and be counted.

Passion1, capital idea.Those pics can be retrieved from the net.Do it.

After the Lynas plant is built, Kuantan will be exporting radioactive salted fish, radioactive keropok etc to the rest of Malaysia. Radioactive dust too (free of charge!)

Vote for candidates that oppose Lynas in the next election.

This is the only way to save your future.