FEISTY, GUTSY, BUT STILL FIGHTING FOR HER LIFE. 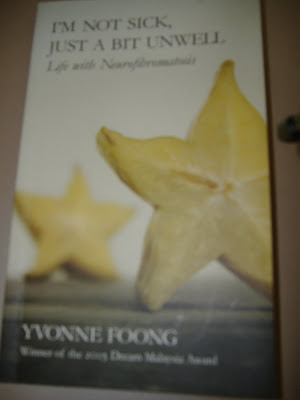 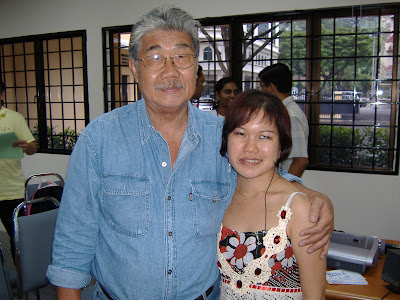 Yesterday, 8 July, I met 21 year-old Yvonne Foong at the MIC Putera Bloggers Buff. I went there primarily to support young Bloggers. It was there that I chanced upon and bought her book "I'm Not Sick, Just A Bit Unwell". I heard her speak in her frail voice about her illness; got her to autograph her book; took a photo with her....and came away ashamed of myself....ashamed that, though healthy, I still grumble about the weather, the haze, the traffic; ashamed that I still get irritated by little things; ashamed that I take so many things for granted; ashamed that I do not spend enough time learning from the disadvantaged; disgustingly ashamed about fussing about little discomforts; shamefully ashamed that I should do more listening when people like Yvonne have lost her hearing because of the multiple tumours that grow on her nerves.

Let's get her to tell about herself:

At age 16, I was diagnosed with a rare and incurable genetic disorder called Neurofibromatosis (NF) Type 2, that causes tumors to grow in my brain, spine, and along peripheral nerves. To date, i have undergone four major surgeries, locally and abroad, the first on 16 August 2002 at GH when I was 16 years old, to remove some tumors in my brain and spine.My second was done free courtesy of Dr. Rick A Friedman in Los Angeles.

The most recent surgery was done on 25th October 2006 in . Through tireless fund raising efforts in exactly a year, Heart4Hope managed to raise approximately RM230,000.00 for the removal of an Acoustic Neuroma and the purchase of an Auditory Brainstem Implant to assist hearing.

The money was raised with the collective effort of some relatives, friends, and kind members of the public, who came forth to assist me physically and financially. Although the money raised is used for my medical treatments, I believe HEART4HOPE is not just about me, but about everyone who shares my belief in hope.

Living with NF has taught me to be far-sighted and ready to face sudden changes in life. NF is not only a physical illness, it also proved to be a financial burden, especially when one does not take practical measures.


I’ve been thinking about this very large tumor growing in my frontal lobe of the brain. Actually I have many tumors in the frontal lobe, one above the acoustic complex, some extending into the temporal bone, into the orbit, jagular bulb, oh my god i easily have more than 10 brain tumors all over. I can’t even count, try as I might! Next time I see the radiologist, remind me to salute him.

Okay complains aside. What I’m trying to say is, I am concerned about the biggest tumour in my frontal lobe. I had just sent an e-mail to Dr. Schwartz, asking whether we should remove it, and not wait till it turns malignant. I don’t want to rush and risk having complications. If the tumor turns malignant, the cells might invade surrounding tissues and cause brain damage.

Let’s see what Dr. Schwartz says. I’ve been considering this for so long. But today, it feels more urgent than usual.

I wonder if my Medulla Oblongata is becoming weaker. Because I easily feel cold, and just as easily perspire. I try to avoid trembling, because when it happens, my brainstem vibrates as if it is threatening to move out of place. I also wonder if any tumors are growing in the hypothalamus, because sometimes I sense my hunger rate is odd. Not to mention, I need to sleep longer hours than a healthy adult would.

Yvonne blogs extensively at http://www.yvonnefoong.com. Her blog banner reads: Fight for Tomorrow. Things I read in her blog yesterday jolted me. Her friend Keishaks who is also afflicted with NS says: The human spirit is never defeated until it surrenders. Her friend and publisher/editor John Ling told her before coming to Bloggers Buff: the crowd size does not matter. Even if only one person came, and benefits from meeting you, that one person matters.

YVONNE, IT MATTERED TO ME. YOU TOUCHED MY LIFE AND I WANT TO BE A BETTER PERSON.

Make time to visit her blog. You may come away enriched.

In March 2007, a cluster of tumours were newly discovered adjacent to her right optic nerve. Orbital MRI and visual field tests showed that the tumors are causing mid-moderate pressure to the nerve. She can still read, but have difficulty focusing sometimes.

Close monitoring using MRI and visual tests are needed to detect any changes in tumor size.

More tumors are growing in dangerous locations in her brain and spine, as well as along peripheral nerves under the skin.

One of the many worrisome tumor is growing admidst her Jugular Foramen in the brain.

The tumors need to be closely monitored by experienced surgeons in the field of Neurotology, Neurosurgery, and Neuro-Opthalmology.

Yvonne, who currently resides in Malaysia, is under the care of Dr. Rick A. Friedman and his associates at House Clinic, Los Angeles. Dr. Friedman had successfully removed two tumors from her brain in recent years.

Yvonne needs around RM4,000-RM5,000 every six months for brain and spine MRIs, visual field tests, and miscellaneous medical expenditures. This is not inclusive of unforeseen circumstances.

Through the internet, Yvonne hopes to continuously raise funds for healthcare.

i can only pray for yvonne. and will definitely check out her weblog. thanks uncle bernard.

Bernard... thanks for helping to spread my cause. It was a pleasure seeing you. And no, don't feel bad. I think the society is only balanced with people who complain about social issues. Because if nobody voice up, probably nothing gets done because the authorities might become tidak-apa. Traffic jams are worrisome and affects everyone. It's a good topic!

Unker B, very, very impressed by this gutsy lady. Good of you to highlight her story... we'll see what's in our power to help her alleviate her misery a little.

Will visit her blog.

Yes, we should learn to bitch less too...

You know what, Zorro, i cried and cried after reading the account of a brave young girl who showed us what human spirit is about. We should be ashamed with ourselves, being healty and all, complaining about trivial things. Yvonne has put things in perspective. Yvonne, thanks for teaching us not to take things for granted.

i read her blog regularly... brings me back to reality and makes me appreciate life more.

;) thank you uncle.
Thank you for your support on the day, was pleasure to meet u, albeit couldnt spent more time chatting with u.

Thank you. Yvonne is such a sweet girl, hope we all can network together to support her. She needs all of our support.

Hope to meet you all one day again!

I bought the book a while ago but never go to her blog. Thanks for the info. See ya soon

Dear zorro sir,
Thanks for the info and I was waiting to go home to check her blog. Her survival spirit speaks volumes. More than all my postings on motivation and positive attitude can ever achieve. I'm humbled.

Hello Zorro, Good to read your blog and hello Yvonne, all the best to you too. Will drop by your blog soon.

Thanks Zorro for highlighting this issue. Will surely visit her blog and see how I or any of my friends can help. Keep up the good work.

nstman!
you were mentioned at our weekly mi rebus today.

and zorro .. God bless for telling yvonne's story. i shall not bitch about anything (other than people who are selling us and our country out).

If I had to pick a star for that day, it wouldn't be Tim or Kenny for that matter as I think Yvonne really brought the real meaning of blogging to the floor and to the would-be bloggers in the event.

Danny, touche & spot on and my sentiments too.She spoke unprepared but the outpourings were from the heart.

so much to learn from Yvonne.
thanks for psoting about her.

Uncle.. thnx a lot for ur support in making Bloggers Buff 2007 a great success. It is a great plessure for me to get to know you lat Sunday. I was very much inspired by Yvonne and her strong will to fight aginst her the problems. We'll will always there to support her and hope to see all of you again in the nearest future. Once again..thnx for your support.