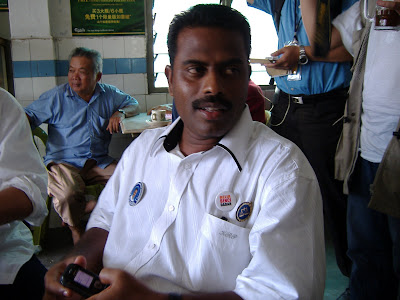 At first look, I liked what I saw. I instantly liked Chegu Pathiban. We left it to experienced ex-journo, now turned bloggers Rocky and Noraina to engage Pathiban, whilst we others observed.

Yes, I like the way he handled the questions. I admonished him on the photo evidence we had of MIC youths making derogatory and unbecoming gestures on nomination day. His reply was that he did not see that. I advised he read blogs. He humbly said he would. I liked his clean shaved face, pleasant demeanor, clean shirt, polished pair of shoes. His bearing made a good statement of good breeding despite poor beginnings.

I felt sad though because I fear for him.

My fondest wish for him, Pathiban, is that he loses this election. 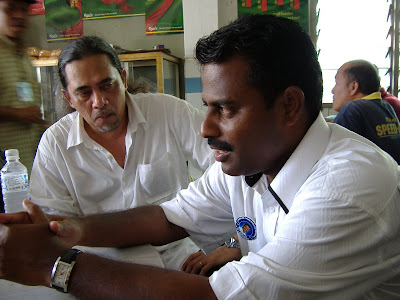 If Pathiban loses he would get out of the clutches of the MIC and Barisan N.

Young man, because I like you I hope that you do not get elected and be used.

Finally from one ex-chegu to another allow me to say this: Politics (in Malaysia) insidiously and imperceptibly corrupts a person. You are too nice to be a politician. So I hope for you own sake, you do not win.

One last parting shot: Beware of those who pat you on the back . It maybe a prelude to a stab there. Be wary of 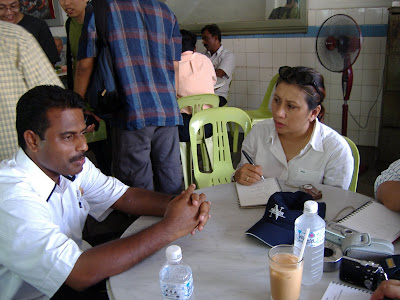 those who give you the Premium Grade smile, teeth and all. It may be a rehearsal to a bite. Also be aware of the throngs who shake your hands, especially those with greasy palms and there will be hordes of them .
So, Pathiban, I hope you do not win and you can sleep easy. Think about this.

Overheard from the next table from one bumi to another: Vote for Pathiban. Our mentri besar says that our religious teachers say it is not haram to vote for another race. Since when has this been an issue. Think about this.

Hantu asked two shoppers at the emporium a few doors away from the kopi-tiam: So how do you feel about the Mentri Besar appointing his personal representative to be in Ijok after the election? The reply: A bit too late....Datuk Siva died waiting for many things.I retorted that they should accept this magnanimous gesture! Reply: okay lah, if the rep makes his service centre on the now-closed landfill. What does that say? Think about that.

Hantu asked a heavy-set chinaman what he thought of all the big guns coming to Ijok. I had to dig deep into my meagre hokkien to deduce this: Come, eat free, talk, talk, talk and then leave us alone. Such stark truths. Think about this.

Hantu whispered to me before we sent off K Pathiban. "Why are you so patronising towards the two Americans. Cant you smell the CIA? Dumb me, I never thought of the possibility. But no fear, I engaged one of them over the NFA...their National Firearms Association.

Just tell him this, beware of Samy Vellu. He's gonna be dirty alright. They'll make him then they will be satisfied.

Yes, Parthiban seems like a decent chap. So is the candidate from PKR, Tan Sri Khalid. All the best to the folks in Ijok! The gravy flows for them. Enjoy while it lasts.

Anymore by-elections? Which constituency will be lucky one? We needs them to perk things up a little. Otherwise, life in Malaysia boring and mundane.

uncle zorro! i love this post of yours. so honest. so straightforward. so real!

eventhough i am far away, i felt i was there. that is your skill in writing, chegu zorro.

keep it up and give us more!

then tell me what they say!!!!

Ask the local Indians what the previous guy did for them in the past... NOTHING. He probably didnt have the support of the leadership.

And I heard this from a Selangor MIC division head.

But some people never learn.

Ohhh ZOrro, this posting is honest, definitely from the heart and you made me smile (then again you always do).

And I cordially answered "I see them every tuesday what...you think they got nothing to do is it?"

I am glad you had a great time Zorro. Now you take care and dont have too much of late nights.

pathiban, do the IJOK folks the biggest favour. if you ever win, please resign at the appropriate time so that there will be another by-election. in this way, more goodies can be thrown to the people of IJOK who has been neglected for the past umpteen years under BN. dont you think that the folks, till today without proper amenites, deserve that little bit more now? please let your conscience lead you and you will nto be enveloped by the corrupt BN system.

Zorro have spoken so many reasons why Pathiban should loose.If Pathiban wins..he will be another lazy ... makan gaji buta hypocrite and a yes man to UMNO...so better loose and be himself.
So now..we both have said it...and it case he wins....the voters are full of shit...that's the only reason he can win...right zorro?

Yok Hoong,
May I zorro? I guess permission is given. I am afraid that would not be possible. Since Macap and Ijok has cost the gov a lot of money that now we have to borrow from Papua New Guinea, Irian Jaya and Somalia, the BN and SPR has decided to make all future candidates sign a bond that they promise not to die while in office. So from now on there will be no more buy-elections.

Q: Parthiban is a chegu..so he gets his salary from the MOE, right?
So, if he is elected, he gets his allowance for ADUN? How does it work?
Does he stop teaching altogether? How? So his students will be left out on the lurch? How? Can anyone attempt this question?

Anthony, Pathiban is an officer in the District Education Department. He was teaching until moved to the Ed.Dept.

Susan...nothing is impossible with BN, they can resurrect the dead..we call it chicanery, they call it tactical strategising. We await someone to reveal this. Meanwhile, the least we can do is get the fence sitters off their butt. Wishful thinking?

That would really throw a spanner in the works.

A politician will always remain a politician. He immersed himself and there's no turning back. Pray that he has the strength to do what's right if Mr. Parthiban is elected.

"May the best Hatchet man wins"

Looks like you have raised the bar. As for me, sad that I couldn't join you guys...

Shar101,
I used to think you were that blogger. But now I believe you must be the president of Pundak or its financier. Idup Pundak!! (I am always careful that I don't mis-spell this one).

Btw, Zorro! I have just told Ena @ Jalan Sudin that I plan to go back to Kedai Kopi King Kuan sometime in the not-too-distant future to talk to the people in Ijok about their new "man". Let's see if we can also get the Cikgu to join us.

Rocky, was just thinking about it last night after to and fro texting with KTN over the MU-Everton match. YES, make it soon. If Pathiban says he has no time to meet us we can construe what he means....but lets him him a chance....till now he is a nice untainted guy, who can be a friend of mine.