VOTE THE BEAUTY IN AND THE BEAST OUT!

It was Eleanor Roosevelt who said that a woman is like a tea bag, you can't tell how strong she is until you put her in hot water. 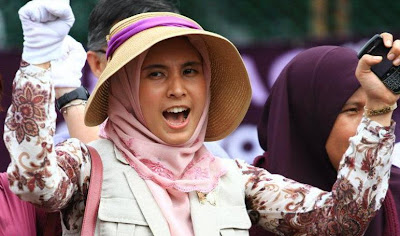 Nurul for sure has gone through enough of that brewing process. Remember she lost her teenage years when her dad was bludgeoned, dragged into a choreographed kangaroo court and jailed for 6 years. As though not sufficiently tempered, as a young mother of two she had to endure another government engineered deviltry by a sponsored and well-coached frustrated fairy. And now an imported backdoor sponsored senator, a jantan at that, wants to do battle with Nurul in Lembah Pantai. But she is taking this challenge in her stride. She will prevail unless UMNO’s imported newly minted foreigners overflow the prepared ballot boxes. She will win in LP despite the Election Commission’s chicanery. She will win because she is strong. A strong woman won't let anyone get the best of her. A woman of strength gives the best of herself to everyone. No matter how many rocks she has stumbled upon her FAITH AND STRENGTH remains intact. A strong woman is one who is able to smile this morning like she wasn't crying last night.

She has got her father’s pit bull instinct and her mother’s stoical fortitude. God shook his head the day He built her but I bet you He smiled at this creation of His!

Dang! This girl has got balls! They are a little higher up that’s all. And that is all the reason I need to campaign for her. And all you DECENT people in LP would CAMPAIGN and give her your VOTE. Wouldn’t YOU?

And Nurul it shall be.

Just for being her father, Anwar Ibrahim deserves to be absolved of all real or imaginary sins. Nurul Izzah is arguably the best thing that has happened in Malaysian politics since Wan Azizah.

Not only that she is young and full with energy. She is wise as well.
Compares her with older politicians that are holding 2 or more terms as an MP .
She even made KJ ( fondly known as Kera Jantan on the online world) from umno looks like a lemon.

Nurul has more guts than the spineless Nong Chik.This lowdown Chicky not only raped the EPF cash cow.He also milked it till the tits turned red,black and purple.All because he wants to buy the Lembuh Pantai elections.

When Nurul roll up her sleeves and ready to go rock and roll with Nong Chik,he will shake and trembled like a cornered rat.Pants all wet.After Nurul is done with him,Nong Chik's squeezed balls will not be bigger that jelly beans.

A definite YES for Nurul.

Sir,
You got my hairs standing on ends. Good will always prevail. God save the RAKYAT.

In the early 70's in Australia, the new catchcry in Australian politics was "It's Time!". Make history in Malaysia, and let's VOTE for a very important and ugly regime change of UMNO/BN to Pakatan Rakyat with a truly beautiful and intelligent woman "Nurul" for Malaysia for ALL Malaysians, and Malaysians for Malaysia - God bless proud Malaysian forever!!! Chris HH LIM, Sydney, Australia

In the early 70's in Australia, there was a very popular, political catch-cry "It's Time!" and the Australian Labour Party won by a landslide!

Now, we have Nurul as our beautiful and intelligent female Pakatan Rakyat politician who will and can lead Malaysia for ALL Malaysians towards a much brighter and transparent future for generations of Malaysians for Malaysia - WE can all proud Malaysians once more!!!

No more migrations for Malaysians ever again!

Count me in Brother Zorro. I will walk with her, all the way.

I hope she will be our PM one day! She has more 'balls' (like you said "a little higher up that's all")than our current PM.

If as a first-timer she could dislodge someone like Shahrizat who had Tony Fernandez's moral support, as a full-term MP taking on an appointed Minister in Pakatan Federal Territory, she can make mincemeat out of him.

Don't be misled by much publicity given to RNC. The fiasco in handling Bersih 3.0 cannot be simply forgotten. Only massive cheating using foreigners might affect the result of such a contest.

Dont worry Nurul ! We the residents of bangsar are with you.
If fact ,you dont have to campaign in Pantai hills,bangsar, medan damansara cos their votes are for you, safe and sound.
From all the indians voters.Real !
Suzyratna.

In the film "The Ten Commandments", Pharoah Ramses said, "So it is written. So it will be done!" There is no doubt that our princess will get our votes once again. A friend of mine who is staying in LP told me, "The ugly face of RNC is enough to rile me to vote for an angel like Nurul."

You all must be kidding! A chip in the old block? pardon me , I was an ardent supporter but no more, not until all accusations against her dad and to herself are acted upon! What has blinded you all? I need some answers! where are the answers? Until then PKR can just dream!

Her beauty can give Thai PM a run for her money. Then again its really money we want

Nurul has what it takes to be a good polictian. She has done good so far. Yes LP do support her and show her unworthy opponent out.

Time in the Malaysian political arena we see more fresh faces and capable young talents. Stick with those corrupted old pig arses from UMNO/BN, we will doom in hell!
Generally, Malaysians are very level headed and will do what is right!...kick those rotten bastards out of Putrajaya.

She has two votes from us.

Why don't you go and suck Najib's two eggs!!...good for your below par thinking ability...and if you included wiping Fat Mama's blowhole, it certainly will double up the whole process.

Nurul has got what it takes, even though her father is lacking. He is her blessing. God taught her life through him. Her strengh comes from her mother.

Malaysia’s debt is an impending danger to the country’s economy. At the country’s current rate of borrowing it will end up with a RM1.6 trillion in debt by 2020. It’s under BN rule that the country will become another Greece.

Why deeper into debt? The answer is simple: Irresponsible and inept fiscal spending, hefty leakage in government spending due to rampant corruption, cronyism and wasteful spending.

Looks like Rais Yatim trying to get 1 Malaysia "baptised" on this merdeka day.... hahahahehhe.....What say you Rice Yatim?....stealing this nation money not enough now stealing other nation song....this is 1 Malaysia... 1 Malaysia boleh!!!!!

Residents of LP are awaiting the GE13 with posters on cronism.We are pissed offed with children of BN ministers being offered multi million ringgit contacts. The daughter of raja nong chik who was given the multi million contact EVEN if does not know the purpose of the "hole" she has under there.
Corruption ,corruption corruption
Lets slam them once and for all.

Nurul, we are residents in Mont Kiara and Sri Hartamas and we are all with you.ABU

To anon, if your father is a criminal are you one??? Use that thick head of yours, one is judged by one's actions not what you are!! Look at UMNO, wah fantas pedigree you see the shit they are doing ??? don't go and tell me the NEP bulshit blabla and bla. Umno has always been for themselves, you think they care about the poor, whether bumi or not???

Bring it on GE13 and we will teach these BN crooks! August 30th be there in Dataran for Malaysia!