"That is not true, they are all members, I think some of them were from the Subang division. I don't know how people can come up with such allegations," she lamented. 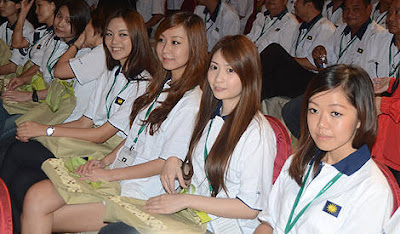 Tee said that it was "very disgusting" for netizens to question the women's membership just because they thought the women were pretty.

"The AGM is only for central delegates, and the Beliawanis who are from a number of divisions, were invited to the AGM to be observers," she said. However, she was unclear which divisions were invited.

As Beliawanis chief, she was UNCLEAR! Accepted Hazy Tee.

OK ladies, hor been a bit. One of you can at least come forward to testify that you are not part of MCA’s desperate measures for desperate times gimmick. One of you must do it, better still, all must come clear and level with us. I myself posted in Facebook that two of you look familiar as beer promoters. Maybe I am wrong…..I apologise in advance in the spirit of the month: apology month!

BITS ABOUT THE YOUNG LADIES HERE

Pretty models got paid for their job!

Well, is this person taking part in anti ISA rally organised by Opposition a PAS member too?

With MCA cronies controling most of the GRO-related business along the Bkt Bintang belt, I will not be surprised if the GROs could moonlight in the day-time as mCA beliawanis come election time to entice young voters (or chee-ko ah peks) who are seeking erection of their own.

The beliawanis were merely there for "window-dressing" purposes, as the spirits and morale of the MCA delegates can be low when they see those Wanita aunties.

It was reported that half of the delegate left the convention after lunch. It must be the aphrodisiac effect of the bak kut teh served in the convention, causing unplanned erections in the presence of these beliawanis that made them rushing to nearby hotels for instant relieve with GROs.

As of July last year, PR was leading the voter registration drive, signing up twice the number of voters compared with BN in the first half of 2010.
The DAP was leading the fray, registering 32.5 per cent of 169,838 voters registered between January and June last year.

So OTK is correct in saying that MCA is now irrelevant.

MCA is in dire straits to uplift or refresh its party image, so bringing in these 'beauties' to parade before the press is their latest no-brained strategy!

People's perception of a political party is the degree of 'youthfulness' or 'freshness' in political ideas and thinking - definitely not pretty ladies or handsome boys!

Whoever thought of this strategy ought to have his/her brain checked. Please don't treat us, voters, like fools by tempting us with such low class eye-candies!

Yes, ada gaya beer promoter. Notice the one with the thigh exposed?

For the first time in the history of MCA’s annual general assemblies, no past presidents attended last weekend’s event. Lee San Choon, Tan Koon Swan, Dr Ling Liong Sik, Ong Ka Ting and Ong Tee Keat were all absent. Was this a sign that MCA leaders excel at the character destruction of their opponents?

My simple message to my Indian bothers and sisters:

To my dear Indian friends, please vote wisely if you want Malysians to have a better future. You have seen how BN had brought down the country and how non-malays are discriminated. Don't just because a few kilos os rise, sugar etc. you sell you vote to them. Please tread carefully and wisely so that the future generation will not blame you. Look long term and for the good of your children and grandchildren. Give PR a chance and if they are not good kick them out in the 14 GE.

If you have not learn your lesson after 53 yrs under bn there is no party that can help you. Pls learn from the Chinese voters. They are ahead in the polictis of this country. You know why? They don't only read msm which churn out inaccurate news and rubbish but keep abreast with time with on line news too. Change and then see. Do your part for change and then demand. Pls wake up before it's late.

Definitely professionals on hire la! Wat the fuck r they trying to proof??? Com'n, these ladies will do anything (well, almost anything) for a quick buck, much less a parade into a hall full of dickheads who after seeing them, probably all drooling and having a hard-on! These useless buffoons!

Chinese schools asked for education fund, Jibby the Hutt said to children: go back and ask your parents to gamble more, so that you not only have the fund, you have also the scholarship for university.

Bernard,
It is your duty to lead this investigation into uncharted and apparently 'unclear' territorial of this mysterious 'Subang Division' of Beliawanis! Pls come back with pictures and video documentation of the highest quality as fruit of your successful endeavour! Go fort!

It reminds me of the phallic structure Suharto built before he left for the afterworld. Maybe this is a parting gift by Tee to her boss. SoilDick Last Stand or The Goner's Last Boner so to speak.

This is shameful...an insult to all wanita mca members.

You pakatanis expect all MCA women members to look like the jubah clad makciks you have in PAS and PKR is it?
So in other words to qualify as a true member, you must be old, fat and ugly , like YB Fuziah (kuantan) and YB Zuraidah (ampang) is it?

This is how low MCA has gone. First treating these girls like they are trophies. Second, treating the rest of us like idiots. Does Soi Lek seriously think we will buy his claim that these girls are (a) MCA members; (b) senior enough within the party to attend this meeting.

The girls are probably offered money just to show up. While the MCA members are there to drool.

Maybe that was Soi Lek's tactic to boost attendance of MCA senior members. Otherwise, he would have been speaking to an empty hall!

People are talking about mca ladies and Sivaji tumpang the column to rally his brothers and sisters?

Zorro,
Many said Indians are kingmaker in the coming election. What say you?

Maybe Zorro will be kind enough to create a topic for Indians like Sivaji to talk about their kingmaker role, possibly can be traded easily with some goodies from Jibby The Hutt.

"I went to ALL the banks about loans."

Barisan have cheated the Indians for 50 years.

(1) Are we equal citizen of this country, if yes why there is BUMI and Non-Bumi
(2) If Malays can have felda and felcra settlers today, what happen to Indians who sweat their blood for the development of the country (3) When Malays can have MARA and etc financial aid for education , why the Indians still need to beg for education fund
(4) Indians are well known for their administrative service and servicing profesional group in government, look at the goverment department today, hardly can see any indians? what have the goverment done.

Till today everything have to beg beg beg only . Enough is enough No more turst in Barisan Nasional & MIC also. Kick them out let us vote for an alternative goverment.

Indians in Malaysia are hoping for goodies from BN. Syiok for one day and then suffer till PRU14.

uncle, someone posted this link in m'siakini for the tiger show....ooops sorry, tiger beer launching show at skypark, here's the link

see the photo titled "Me and the tiger crystal girls" where the four so called tiger beer promoters posed with a guy in a black polo T with a japan flag logo. Don't you think that these 4 promoters look the very similar to the mca beauties hehehe

Why JAIS did not complain when MizzNina sang for Guiness in Arther's Day without tutup aurat?