Yesterday in their Reliving 40 Years series, the STAR featured two ladies I knew as friends. 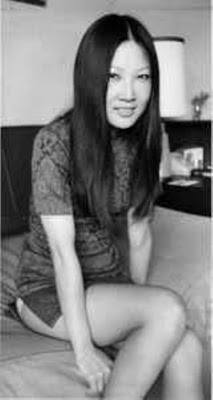 I met Adele at one Press Ball. We used to have lots of Balls those days like the Ad Agency Balls. Every organization held one ball or another annually. However, when we questioned why nobody held the government’s Ball, a furor ensued and we never had anymore Balls and henceforth only Annual Dinners…..no more holding any Balls. Period. I digress….

Adele, when we reminisced, reminded me that she boarded with Mum when she had a brief stay in Taiping. I was training to be a teacher in Penang then. I remember Adele for many things, some told to me by her journalists’ colleagues. But we all agreed on one thing…..her legs were meant only for mini-skirts which was the rage then and dang, she did carry those minis so well. All typewriters stopped clacking when Adele entered the Press Desk. She had straight, healthy jet-black hair which was in vogue then. In 1975 she moved to South Australia as a political staffer and later became the wife of the 35th Premier of South Australia, Don Dunstan. "She has the high cheekbones of her Asian forebears," wrote one, "and she walks with the in-born grace of the East." The fact that she was from Penang added to her exotic status. If you thought she was a bimbo, how wrong you are. She chided the Australian Press:

"The trouble is that the Australian press is still infantile," she said. "It does not know how to control its bowels. Only one paper has to get on to a good story and we get several cases of verbal and pictorial diarrhea, all trying to go one better."

If cancer of the lungs did not end this young firebrand’s life can you imagine what she would today say about our Main Stream Media! Maybe much worse things! No? 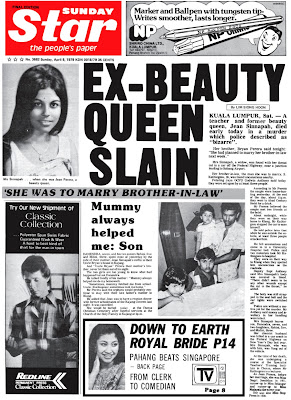 JEAN PEREIRA SINNAPPA and I were colleagues at Sek. Sultan Abdul Samad, PJ. I did not know Jean was the wife of my regular oasis (read watering hole) buddy until a school teachers’ get-together. From thence our friendship gelled although she taught in the afternoon session. When I was the President of the Staff Council, Jean was an able secretary. Being a former beauty queen Miss Negri Sembilan of 1971 as well as Miss Selangor and Miss Malaysia runner-up, she was a celebrity of sorts but remained her usual charming and unassuming self as a teacher. According to her, Sinnappa always chided her whenever she went for her regular Saturday visit to her hairdresser. She confided that Sinnappa told her that she was always beautiful to him and it was not necessary for those Saturday visits. One New Year Eve she called me to tell me this: “This morning, Sinnappa told me to go make myself the most beautiful lady for him tonight.” We lost Sinnappa in the early hours of the New Year in an accident. Jean was flung out of the car but survived with minor injuries.

On 7 April, 1979 I was in school waiting for my Selangor Under 18 football team to assemble. Aklis the clerk rushed up to me and told me that Jean was murdered. At her funeral I requested to be one of her pall bearers. I do not want to go into the murder trial and want to remember her as she was always – graceful, gracious and gorgeous.

Weeks later when I was a guest of DJ Constance Haslam at the Radio Malaysia studio I asked Connie to play this song:

Bernard, may I say many thanks for sharing fond memories of these two fine ladies. Yep, I remember them too and it was just like yesterday. How fleeting time flies. The song, very apt, Bernard, very apt.

Wow I am impressed. You must be one terror guy in your heydays. Our life is so dull these days. Nothing sex-citing. Only Anwar Ibrahim and Mat Sabu. Anwar should have met these two.

It is Don Dunstan. Not Dan.
Thanks

Yes I do remember Adele Koh. When I was studying in Melbourne from 1976 to 1980 I remembered she has to play host to Mr and Mrs Harry Lee. Mr. Lee was then visiting Australia and calling on Don Dunstan was part of his itinerary.

The Australian Press then had predicted the official meeting between these two men and their wives to be an awkward one.

Our sweet Adele was person non-grata in Singapore as far as Harry was concerned but dear Adele, no matter what, had to play the gracious host and she carried out her task with her usual sunshine smile and personality.

Yes, Adele. Our beautiful Adele. You left us and Don too soon.

Roti Sunshine....was it the Herald that LKY shut down in Singapore where Adele was a journalist. She was told to leave Singapore.

Yes, I remember Adele Koh. I was then a new migrant to Australia. She impressed deeply through her marriage with Don their contribution in building a bridge between SA (Adelaide) and Penang. (this claim of mine requires verification...old brain is rot, not 100% sure). Help out Zorr?

Jean sinnapas son,Darryl who is an acquaintance is doing well for himself.Last I saw him he was a CEO of a waste management company in Dubai.Hangs around at Cobra cLub PJ when he is in town,loves rugby! FYI mate

Why is it that ladies of the past are more beautiful than our girls now?
I am sure your Mrs is also beautiful. So is my grandma.
But the girls now not so.
Jangan marah ye girls.

I cannot remember whether it was the Herald or not. Sorry.

VP, thanks for the good news. He lived thru it all....say Hi when you next meet him at CC.

A-Man, beauty is in the eyes of the beholder mah. Yes Karen was and is still beautiful....very subjective coming from me....her students over 25 years can tell you more. In La Salle Sentul some of her Form 3 students (also my students) told her they were disappointed in her choice....and after the fact many years later they told me that I was a lucky sob. All true.

WandererAus....bridge from Adelaide to Penang? Not sure....but I know Adele was criticised by the Australian press for wearing a tight fitting and long slit cheongsam when presented to Queen E II. Dang what is a cheongsam suppose to be? A purdah?

This is a meaningful celebration of two extra special accomplished ladies. I was in Form 1 at Bukit Bintang Girls School when Mrs Jean Sinappa was teaching Science there. She was graceful, gracious & gorgeous - exactly as you have revealed. Not snobbish, so humble and caring. As for Adele Koh, news of her was so widespread as I entered uni and I thought it would be good to hear her speak. But God had other plans for her. May the legacy of these two ladies live on as examples to the young ladies of this era.

Zorro, thanks a million for the great tributes to these wonderful women. A big loss to this world. Thanks

My father said Sinnapa behaves like a slut. Why are you admiring her?

Why do I admire her? Answer: Why should I admire you and your father?
OK puppy, go back to your papa with the tail between your hind legs.

Sorry Zorr, I did'nt make myself clear enough. What I meant was bridging the two cities fostering closer relationship. I did'nt think then, Australia or Malaysia have acquired bridge building to China standard...even, China still have a long way to go if she try to link Penang and Adelaide. Beer must be doing overtime work! haha

Salvatore, grateful for the link. Cheers and more power to you.

Yes, Penang and Adelaide were twin cities and they used to have an Adelaide Week in Penang every other year with Penang Week in Adelaide in between...Don Dunstan and Adele Koh used to visit Penang then with Lim Chong Eu reciprocating the next.

Don't know if they still do it.

Anon1031pm....yes that is correct. I remember in one of my visits back to Penang my brother took me to our regular Go-Go keow teow man. But he was not around. The neighboring stall told us: Ee key leauw Ausitalia. Yes he was there to promote Penang.Willl have to talk to Guan Eng when I see him next wednesday.

I rememebered Adele Koh's curtsey to
the Queen,it was spectacular!!!!!!oo la la .
PoorJean - her untimely demise could be a BOLLYWOOD box office seller!!!!!

Yes, we remember Adele Koh. Even had breakfsst with her - it must have 1967/8 when she was a temporary Resident Fellow at Clinical Students hostel, University of Malaya. She then doing her Masters (must have been in Arts). She often came down and had breakfast with us medical students along with Ms Josephine Geh ( another Resident Fellow).
Very poised and polished and such a great loss when she died so young.
PHTan

MCMC's directive to local TV stations not to air the 'Undilah' video has really ridiculed Najib's claims that Malaysia is the world's ‘best democracy’.

YAH ADELE WAS AN AUSSIE ICON- SHE WAS OUT TO SHOCK THE CONSERVATIVE AUSSIES AND WAS WAY AHEAD WITH HER REVEALLING FASHION....SORT "THUMB YOUR NOSE" TO EVERYONE LIKE DON...

Hi Joyce, I read your comment but deleted your post because it had your email address. This is to maintain privacy. I will email you shortly.

Hi,it's Joyce again. I haven't heard from you and I was wondering if I had given you the wrong address, it's jr_weitz@yahoo.com. Thanks.

Hai Zorro! I sure wish that they could reopen Jean Sinnapa's case again and bring some closure to her demise. What with all the forensics technology out there, I am sure that we can at least get more information about her murderer!

indeed me was in form 4 then and the rest of the boys goes gaga upon seeing her...alas ..r.i.p ,of course SAS PJ has always being in news.

Great article on both the ladies. A wonderful tribute to Jean Perera. From A Malaysian, now living in Peru

I am intrigued by this case. Jean Parera, saw the doccie, its a pity there was no DNA testing that time. But they can still test even after many years. If that guys had not lied it probably would have ended up differently. Justice was never served, maybe people were scared more truths will be revealed.

Anon419pm - "Jean a SLUT"??? Well, she made Malaysia proud with her crowning glory. What did ur father or u achieve??? Condemning people. Be it a slut, whore or a bitch....i am truly proud of my aunty. May her soul rest in peace.

I remember Adele n her legs made for mini skirts. She was a lecturer in the Royal Military College, Sg Besi. All of us knew her as a fantastic forthcoming lady. She is always in my thoughts n spirits. My honour to have known her. Thank you, Bernard