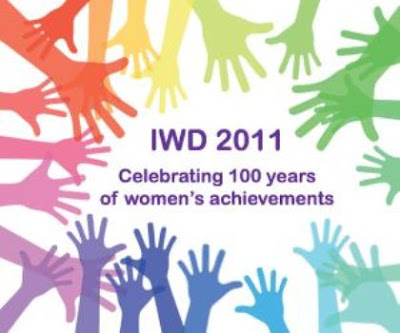 Fauzi, Ariff and I went into Umbai to check out its ikan bakar on the eve of Merlimau polling day. The fare was so so. I was distracted by an old Malay lady that resembled my favorite Aunty Zainon of Jalan Pauh, Taiping. This Aunty Zainon look alike was mopping the eatery complex at 6:00pm. I thought she should be at home with her family awaiting family dinner. I gave RM50 to Ariff to discretely give to her.

I dedicate this posting to her and those of her age who I am sure worked and continue to work to make ends meet or to help out the family.

I salute them on International Women's Day.

I also dedicate this posting to Kuantan resident Ah Mei Chey (sister) who I met at every by-elections since Sibu. HERE

This posting too is especially dedicated to these lady-scavengers from the richest state – Sarawak. I read about them on the morning of polling day in the Sarawak Report. 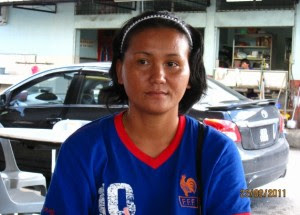 Nuratiqah binti Abdullah told us she is 34 years old and has three children aged 8, 9 and 15. Her family lives in resettlement area but on land without a Temporary Occupation License. Therefore she is unable to access basic utilities such as water and electricity. At night, her house is lighted up with only one bulb running from a car battery.

The home was partially damaged when fire broke out 3 weeks ago. The children’s school uniforms were lost in the fire. Her husband is jobless and occasionally joins her at scavenging. An invalid father-in-law lives together with them. He receives RM150 in welfare monthly. 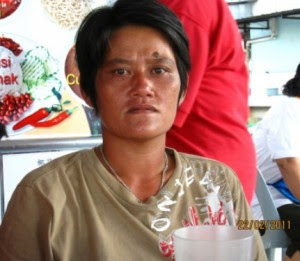 Nanong binti Sidek is aged 37. She lives within the resettlement scheme. Her dependents are two young children; son 12 years, daughter 9 years, for which she receives RM200 in child welfare support monthly. Her husband deserted the family 4 years ago.

She lives with an aged father, who suffers from diabetes and heart ailments. She formerly worked as waitress in a coffeeshop, but was unable to withstand constant scolding by employer. She has been scavenging since 2008. 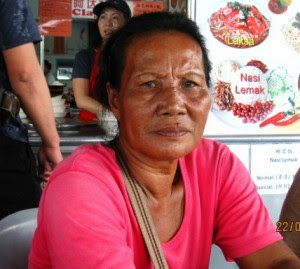 Kiat anak Resat is 69 years old. She too resides in Kampung Stutong Baru, which forms part of the Stampin Resettlement Scheme. The resettlement scheme itself is made up of 1154 lots of land. She formerly worked at a construction site for 6 years before she took to scavenging for the last 4 years.

Her husband is wheelchair bound due to a stroke, for which they used to receive welfare of RM60 per month for 2 years until it stopped. She has 5 grown up children; her 3 sons have no fixed income (one is an alcoholic), her 2 daughters are already married with families and contribute little support.

Down the road from the dump can be found some of Kuching’s wealthiest developments. Taib’s other son Abu Bekir’s apartment at Village Grove is about 300 meters away and he must pass them every day. 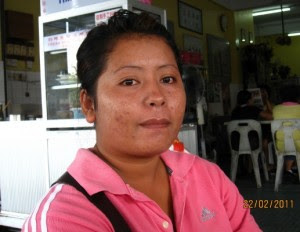 Betty anak Gelangyan is 22 years old and the newest to the group. She is also from Kampung Stutong Baru. Her mother is 43 years old and unable to work as she suffers from epilepsy, for which she received welfare of RM70 per month for 2 years before it stopped.

Betty works in coffeeshop RM400 per month to support her family and a 19 years old school-going sibling. To try and supplement their income she started scavenging 4 months ago.

Our source told us that according to the ladies, although they keep some of the salvaged items for personal use, they also try to use it to barter for foodstuff such as rice with the neighbours or with the local grocery shop where they live.

I TIP MY CAP IN SALUTATIONS TO THESE LADIES.

Not for this women! or bitch!!

Why DAP is defending her.

she should be in Jail!

When I see the meagre sum the welfare gives to the unfortunate and compare to the so-called arms commissions, AP licenses etc given to those thieves it really makes me wonder how those people can still give their votes to the UMNO/BN????

Good tribute by Zorro to the unsung ladies of our country.

How about the one closest to you? No mention of her at all?

Duke, that one reserved for Mother's Day or Grandma's Day. Women's lah, not Woman's....so early you are sloshed?

If Khalifah Umar Al-Khattab still lives he will beheaded you.