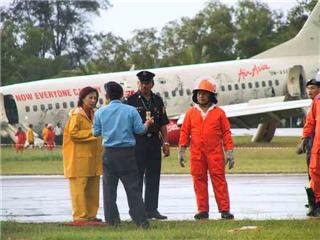 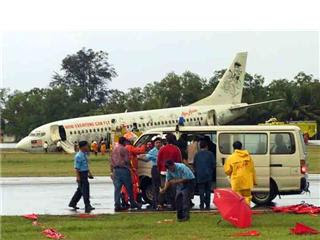 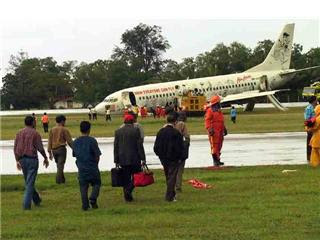 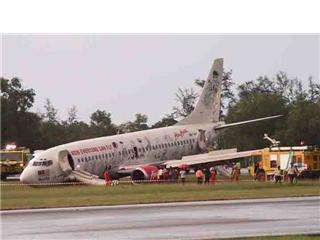 JUST CAN'T FIND WORDS TO DESCRIBE THIS! DID IT REALLY HAPPEN?
HOW COME OUR MSM COULDN'T FIND SPACE FOR THIS?
IF IT DID, THEN THIS POST IS A REMINDER THAT NOTHING IS PERFECT!
Posted by zorro at 10:35 PM

Hi Zorro,
Yes this was a real incident, but it happened some years ago, November 2004, I think, in Kota Kinabalu.

The plane skidded off the runway while landing in heavy rain. A few people suffered minor injuries, but it was not really a big incident.

Probing. Like I said, it is a reminder that nothing can be taken for granted. Thanks for visiting kitty.

AirAisa is a fantastic airline otherwise Kalimullah will stay clear from it. The fact that Kalimullah joined into the AirAisa Grouop, AirAsia had to be good.

I hope htat you will now understand why such bad news cannot be known to Malaysian and this was not new worthy. If it has been the case of MAS, then this is definitely news and should be a full page of two page news.

Sick and tired opf this Sleepy Head, son-in-law, Vincent Lim (4ht Floor boy) and Kalimullah. But I must admit that they are all great people worth all the RESPECT we can find!!

Hmm.. looks like "NOW EVERYONE CAN CRASH LAND" and look what you get from buying second planes from MAS, but seriously how come the MSM dont carry news report like this? must be those 99 cents trips they give out.

It was in Kota Kinabalu a few years back.It wasn't a crash landing.It was a pilot error when he was making a turn into the apron he over steered and landed on the grass.

I think nobody was hurt, just jolted by the nose wheel diving into the soft ground.

MAS has had more of this type of incident in Sabah and Sarawak mainly with their Fokker F27.

I have flown with them a few times.There is nothing wrong with the airline and you get what you pay for, no frills.

You pay through your nose with MAS and they serve you horrible food and no more booze on domestic flights.

Zorro,
Maybe u should check out this pict. Nothing was reported on this.

did some research and found this

looks and sounds real enough for me

Hi Muteaudio,
The incident with the Malaysian Airlines B777 left engine failure happened November 2006 immediately after take off from Stockholm airport in Sweden.

The left engine was shut down and the plane returned to Stockholm airport and landed safely. The B777can fly on one engine if needed.

I don't think it was reported in the local MSM, though.