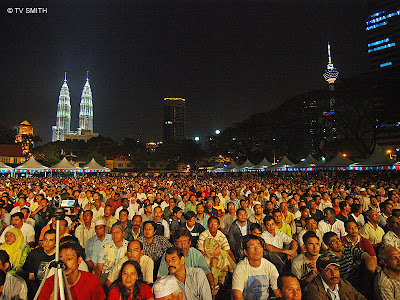 Raja Petra and the forever radiant Marina had invited Malaysians to be part of their 35th Wedding Anniversary Bash. Malaysians have a penchant for big parties, so the grounds of the venerable Kelab Sultan Sulaiman was inundated with 20,000 Bangsa Malaysians eager to party. Like in all great bash, you need to have a mysterious guest of honor. Pete's GOH was Datuk Seri Anwar Ibrahim, celebrating his release from the five-year-ban inflicted by some kangaroo court. Now here is the surprise! Displaying the old school charm sadly missing these days, Pete whispered to DSAI......"Datuk Seri, today is an auspicious day for you....you are free....you will celebrate only once the significance of April 14 2008." " But today is your wedding anniversary!" insisted Anwar.
"Then you will have to throw a humongous wedding anniversary party for me when you become the PM", Pete pouted in typical RPK repartee. 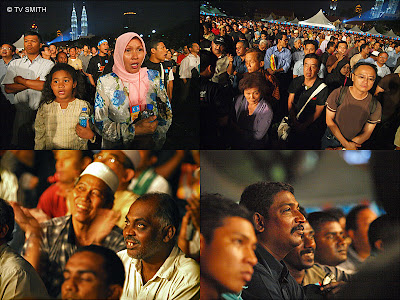 Once this was agreed and Emcee CheguBard was alerted, Malaysians stood at attention and sang the National Anthem. I choked and stifled a sob.....I seem to be doing this of late whenever the Negara Ku is sung. Then the Keadilan anthem was sung.....stirring stanzas sung with vehement gusto....raising the hackles on my nape. When Datuk Seri Anwar was invited to speak, he put aside his prepared speech that was supposed to honor Raja Pete.
I THINK I SAW HARIS' HUMMING BIRD PICK UP THE SCRIPT FROM THE PODIUM,....LIKE HOW SHE GOT A COPY OF TENGKU FARIS UMNO PREPARED SCRIPT. 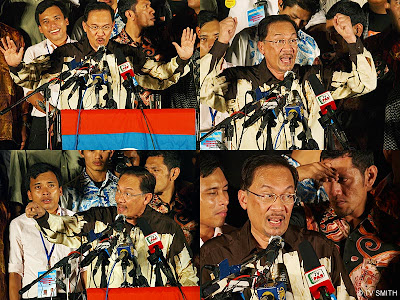 Datuk Seri Anwar spoke for close to an hour and I must admit that the contents came from the heart. In front of a majority Malay assemblage, with Chinese and Indian admirers making up some 10% of the gathering, he repeatedly used the expression KETUANAN RAKYAT. He said it close to 8 times and everytime accompanied by appreciative applause and cheers from the throng. He said many things else but to me "KETUANAN RAKYAT" was a welcome refrain from the maniacal chilling "Ketuanan Melayu " bandied about by a desperate UMNO.

! was standing some three feet away from the podium and I heard orders from above me: "Block" followed by many more similar instructions around me. I turned to my right and I saw the police chief and his boys making their way to the podium. But the people blocked their progress. It was then that I saw Anwar turn to the right and said, "Kasi lepas". (Let him thru.) People were not happy. Boos and catcalls drowned whatever transpired between Datuk and the cop. I gave my share too: I shouted:"Next year be ready to be his escort!" I got an appreciative slap on the shoulder and a buffalo-type stare from a young confused and seemingly helpless cop. 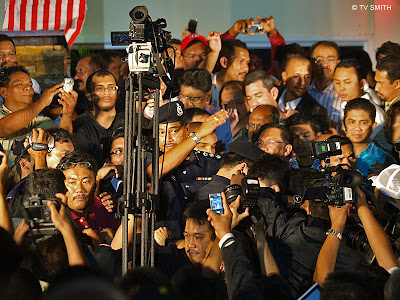 It was learnt later that the cop asked Datuk Seri if he could wind up his speech. He wound down by declaring that he forgave all those who harmed him during those trying days. The Negaru Ku was sung again and the evening ended with a cacophony of REFORMASI, REFORMASI, REFORMASI.

Since we were below the grandstand we helped the media up onto the grandstand. However, the RTM and TV3 crew were not allowed into the press conference. I thought that was not nice.Those boys were just doing their job and we have a choice not to tune in. Whatever, just my dua sen.

TV Smith and I did not attend the press conference as that could be left to Tony Yew (remember to watch his YewTube when he puts it up soon) and Haris Ibrahim. SB Loy beckons. Stiff onces for TV Smith and I.

Sorry Marina and Pete, we could not join your gang at Delicious....we had appointments to keep with some guests at the NPC. However I am waiting for the party DSAI promised to throw for both of you......in the meantime stay close together.

Wish i coulda been there. We owe our social and political enlightenment to the sacrifices of those who chose to stand up for us, when we were just willing to live our lives apathetically for so long. Being apathetic is no defense now in this day and age.

What we need now is strong yet caring leadership that puts emphasis on love between fellow man as well as justice, to steer our country and her people through the trying times ahead of food and energy crisis, that which is inevitable.

Given such challenges facing our nation, the time starts now for us to grow up as a caring nation whose government, education and economic policies allow us to survive and prosper in the changing world scenario. In this, a clean, responsible and just government is essential for our continued sustenance as a nation.

I'm looking forward for good things to come. Call me naive but i believe we have the power within us, despite the negative history that is part of the baggage, to change for the better.

Well, at least, one can only hope.

Uncle,
A sweet and simple account of what happened there.
Yes, each time I hear the National Anthem, it does make my eyes water too.......
Patriotism and Pride; proud because we dare to change; proud because we have the faith and courage to change.
Patriotism because this is indeed, Tanah tumpahnya darah-ku. Where else?
I am and should be bumiputera too - afterall, I was born here and so did my father and his father, even if my skin colour is not belacan but more like the banana.
hmmmmm................

BN is threatening us,
BN is stealing from us,
BN is sucking blood from us,
Who is to help us?
Prisoner to PM is to resurrect us!

Do you still have a stiff neck?

I hope you have recovered but now I don't wonder why at all you got it!!

helping media up the podium?
shouting like hell?
4-38am?
NPC?

think you are 25 again issit?

Just take care & inform us if you are recovered or if you want aunty here to stand on yr neck with my stilletto?

that one sure winner - always seems to work like magic

I still dunno abt my support for DSAI....call me a cynic but do call me if he turns out to be all we wish and hope for in a true and just leader!

Your diagnosis might be correct, Pewnny, but I am healing now....should be as good as new tomorrow.

DSAI is the best we have at the moment. Cant be too choosy because we dont have many choices. He knows how damaging the 5th estate can be and he should be very aware that we will not spare anyone for missteps.